A little bit of Telugu in Africa

HYDERABAD:  From working at a ‘fancy store’ in a village near Tenali (Andhra Pradesh) for `20 a day to amassing a follower count of 3,81,000 on his travel vlog ‘Uma Telugu Traveller’, Uma Prasad Malempati is living his dream. It did not come easy, but Uma speaks of his struggles with an admirable nonchalance and frankness. No wonder, his fans cannot stop gushing about his joie de vivre that can be felt even through a screen. This travel vlogger, who studied formally till class eight and was then forced to take up odd jobs to make a living, is famous for documenting his travels across Africa. He has been to countries like Tanzania, Kenya, Uganda and Zambia, and his dream is to cover all the 195 countries in the world.

The adventures
Uma has spent time with indigenous tribes in Africa and his videos are helping to break down several myths about these regions. Recalling his stay with the Hadzabe tribe in Tanzania, which he documented in a eight-part series, Uma says: “They still follow the old ways of living. They hunt animals with bows and arrows and sleep in bushes. Among other animals, they eat pythons and believe that applying the snake’s fat under the nose can treat one of asthma.

They also make three markings under each eye with a special twig to cure vision problems. They are very friendly and I learnt a lot from them.” In his videos about the Samakay tribe who live without electricity and other modern amenities, he gives a glimpse of their villages, houses, food and way of life. He has also been to animal sanctuaries and safaries, and has shared his adventures with mountain gorillas and cheetahs. One of his most memorable trips, he shares, was to the village of Umoja Uaso in Kenya where no men are allowed to live. The village started as a sanctuary for survivors of sexual violence, and they take in any woman who is oppressed by patriarchy.

It has not even been an year since Uma started his vlog. He roamed around Africa in the pandemic year and has produced over 120 videos now. His first video was about a man named Moosa who grows Indian vegetables in Mali. With 15 videos, he had around 800 subscribers. And suddenly, from June 1, the traffic to his vlog increased exponentially. “It was nothing short of a miracle. My channel recorded 15,000 followers per day through a week. In fact, I received a mail from YouTube which said that there was some unusual traffic to my channel,” Uma recalls with a laugh.

The struggle
“While I was growing up in Vijaywada, a financial tragedy brought us on the streets. I had to drop out of school and relocate to my mother’s village near Tenali. I did odd jobs that would fetch `20 per day. I worked in Andhra canteens, construction firms and at cycle repair shops. However, I had this dream to see the world and experience different cultures. It took me some time, but am happy that I arrived,” Uma says.

He was constantly on the lookout to find sources of income, and when a relative suggested that there was a job in a country called Mali, Uma did not hesitate to take it up. He shifted to the country in West Africa and started working in a water processing plant. But he never forgot his dream and kept trying to find ways to realise it. When he expressed the same to his boss, the latter happily lent him money to buy a smartphone. Uma learnt how to make YouTube videos with help from the internet and friends, and there was no looking back. 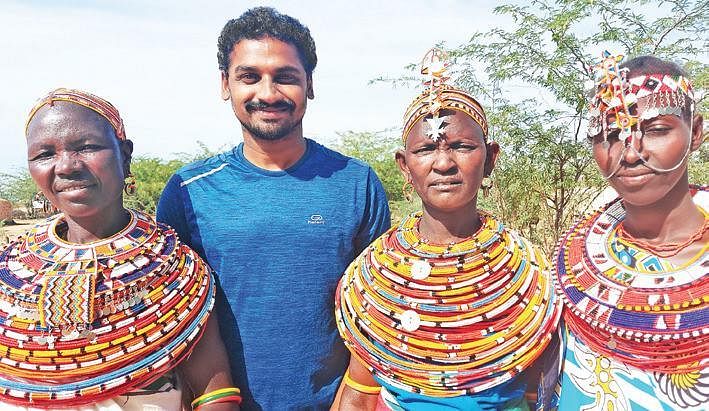 Getting around
Uma takes a guide with him everywhere and uses Couchsurfing to live with locals. He also keeps in touch with Indians in those countries. During his stay in Mali, he picked up the local language, Bambara, and a bit of French too. He learnt English from other travellers. Now, his fans ensure that he gets a warm welcome in any country he visits. Was it difficult for him to communicate with people from such diverse countries? “No, not at all.

We speak different languages but a smile is understood universally. If you want to make friends with strangers, you just need to smile and say hello. People here are kind and I am honoured that they accepted me as their guest. I want to tell them about India and the similarities we share,” adds the traveller, who is all set to explore Ethiopia.