TV reports say that Surendran was carrying the "Irrumudikettu" (a bundle containing offerings) when the police told him not to proceed citing law and order issues.

Amid tight security, thousands of pilgrims offered prayers at the Lord Ayyappa shrine early Saturday, the first day of Malayalam month 'Vrischikom,' even as a BJP leader was taken into preventive custody from Nilackal, the base camp. The 62-day-long Mandala Pooja-Magaravilaku annual pilgrimage began this morning.

Kerala BJP's general secretary K Surendran and his party workers were blocked at Nilakkal base camp and asked to return. TV reports say that Surendran was carrying the 'Irrumudikettu' (a bundle containing offerings) when the police told him not to proceed citing law and order issues.

The state came to a standstill on Saturday after an unexpected hartal called by right-wing Hindu outfits in protest against the arrest of a VHP leader KP Sasikala at Sabarimala.

Sasikala, the state president of Hindu Aikya Vedi, was let off this evening with a warning. She will be allowed to pay a darshan after getting bail from court, the police said. Along with her, BJP leader P Sudhir was also arrested.

The Sabarimala shrine opened for the third time on Friday since the Supreme Court order allowing women between the ages of 10 and 50 into the temple.

A CPI(M) leader's son and his journalist daughter-in law were attacked allegedly by protesters during the hartal today. Julius Nikithas and wife Saniyo Manomi, working with a leading Malayalam news channel, were attacked at Kuttiady as they were going to a hospital in a car to visit a patient. READ HERE

Mary Sweety, a 46-year-old woman, who had made a vain bid to trek to the shrine when it was opened last month, tried her luck again today, but beat a hasty retreat after protesters blocked the bus she was travelling in at Chengannur, about 30 km from Pampa, late Saturday. She has been sent back to Thiruvananthapuram, police sources said.

TV reports state that the BJP has taken out a march to the Secretariat in Thiruvananthapuram.

BJP begins protest at police station where Surendran is detained

BJP activists are staging a protest in front of the Chittar police station in Pathanamthitta district where Surendran has been detained.

BJP state president P S Sreedharan Pillai said the police action against Surendran has created an "extremely dangerous" situation. BJP workers will observe a "protest day" in the state tomorrow and block traffic on the highways, he said.

According to Manorama news, the BJP is planning to take out a Secretariat march to protest police action against Surendran and other party leaders.

BJP leader K Surendran and BJP Thrissur district president A Nagesh have been taken into police custody at Nilakkal.

Devotees planning Neyyabhishekam during night allowed to stay at Sannidhanam

The Kerala police have imposed new regulations at Sannidhanam. Those devotees performing neyyabhishekam ritual on Saturday night can now camp there, say police. 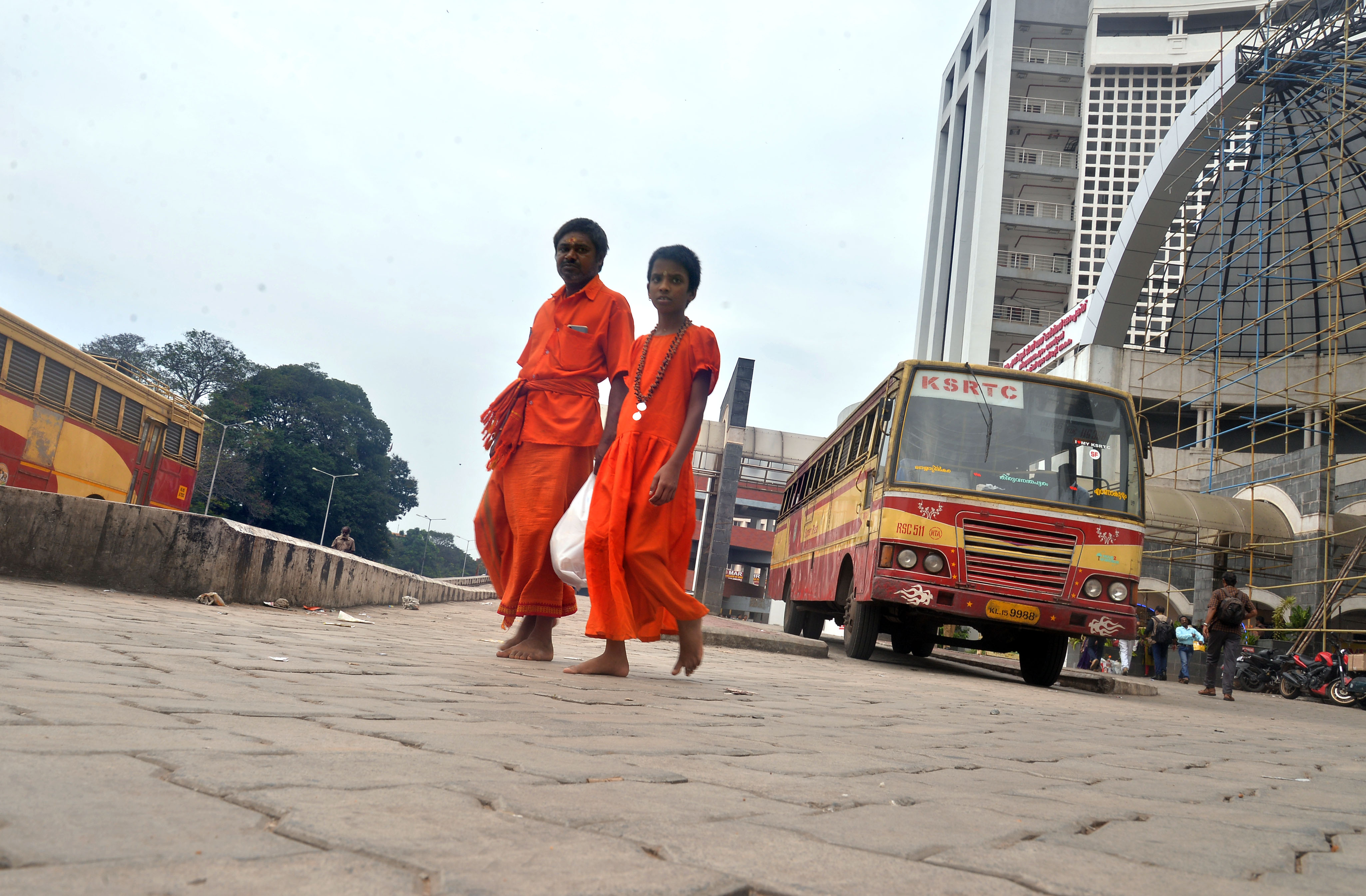 In a tragic incident, two Sabarimala devotees from Tamil Nadu died when the vehicle in which they were travelling met with an accident at Idukki district, reported Samakalika Malayalam website. 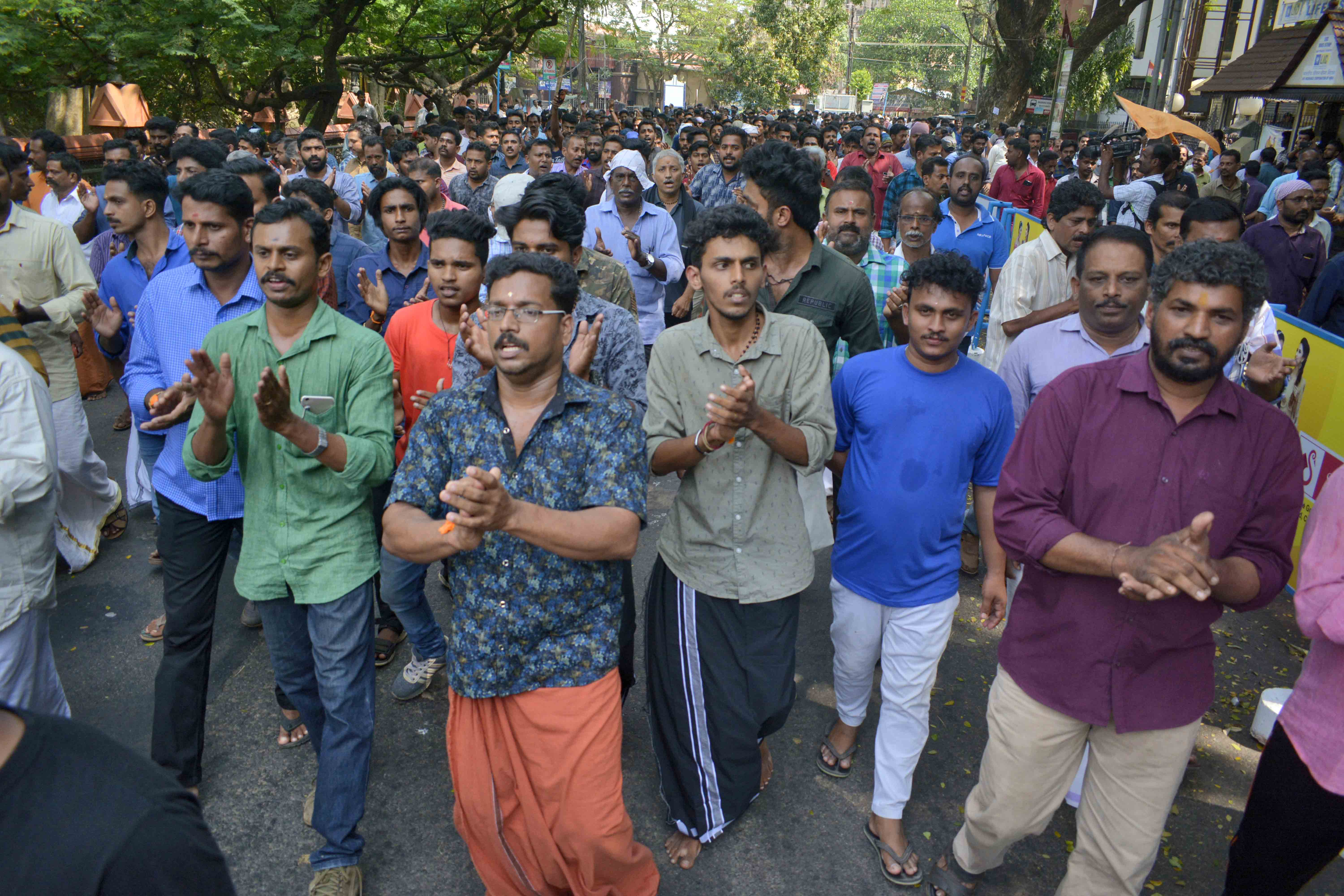 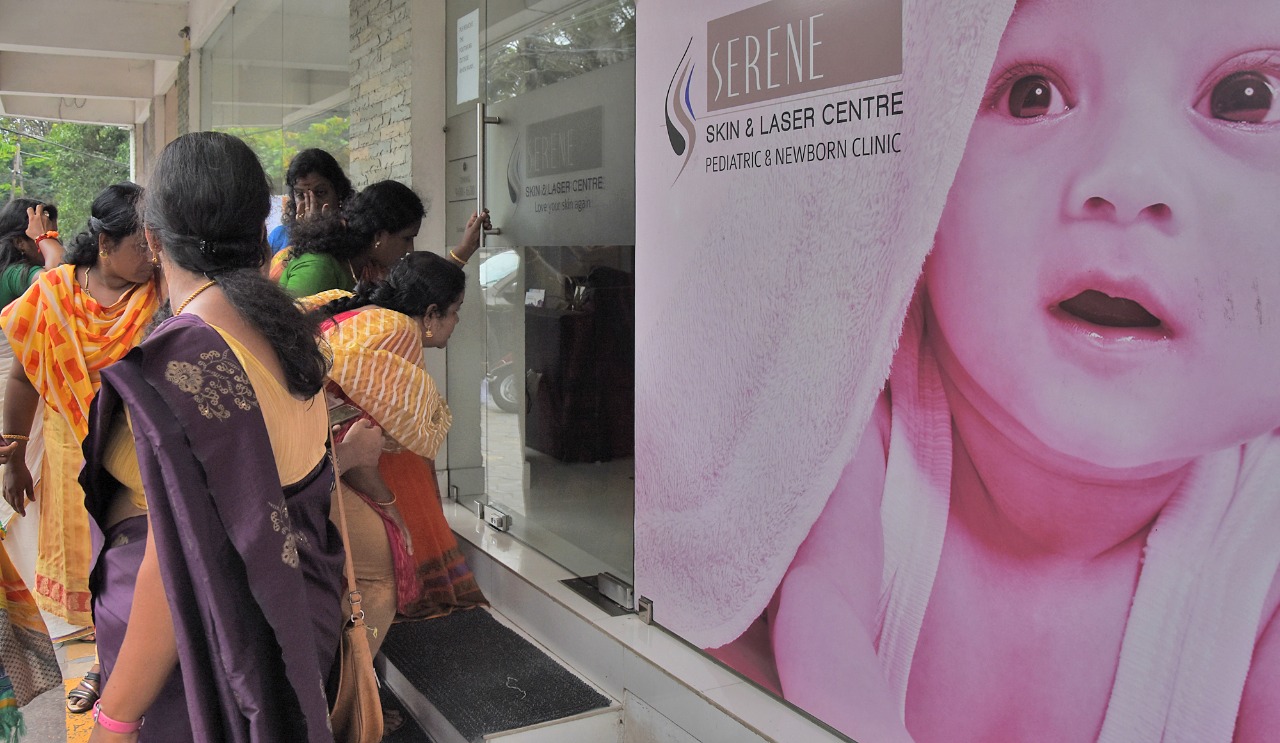 Hartal supporters trying to close down the beauty saloon of noted hair stylist Ambika Pillai at Thiruvananthapuram on Saturday. 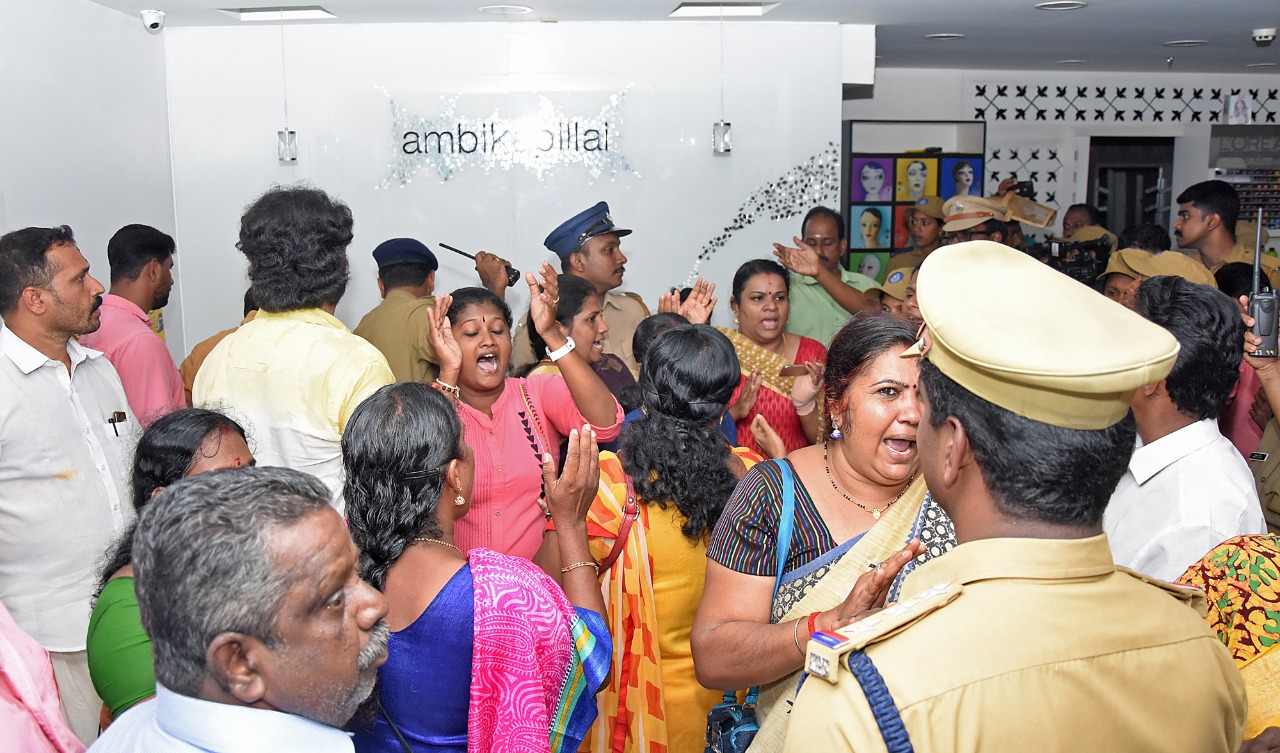 Hartal: Cops beef up security all over state

Police personnnel are deployed in large numbers all over the state in the wake of untoward incidents being reported from various parts during the dawn-to-dusk hartal. 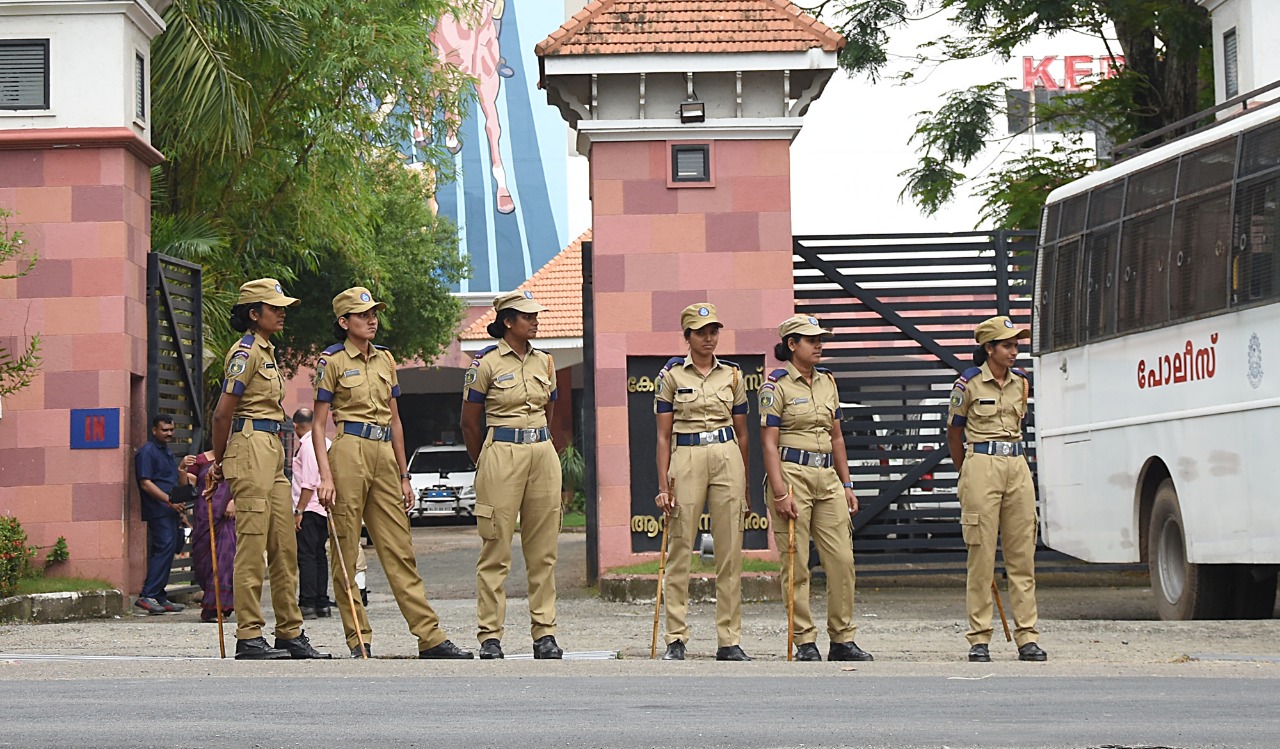 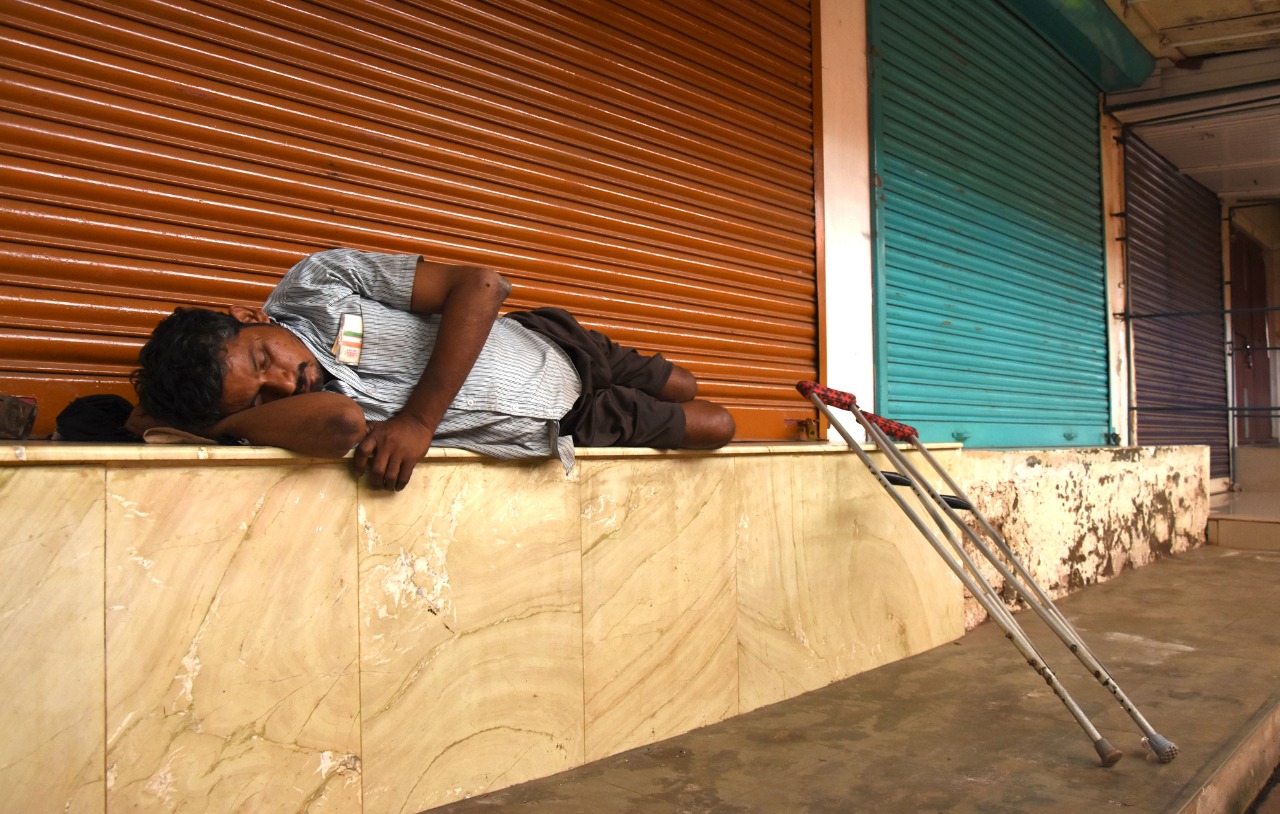 Petrol pumps witness heavy rush in Kerala due to hartal

Motorists had to face many hassles on Saturday due to the state-wide hartal. Long queues were seen all over the state in front of petrol pumps. 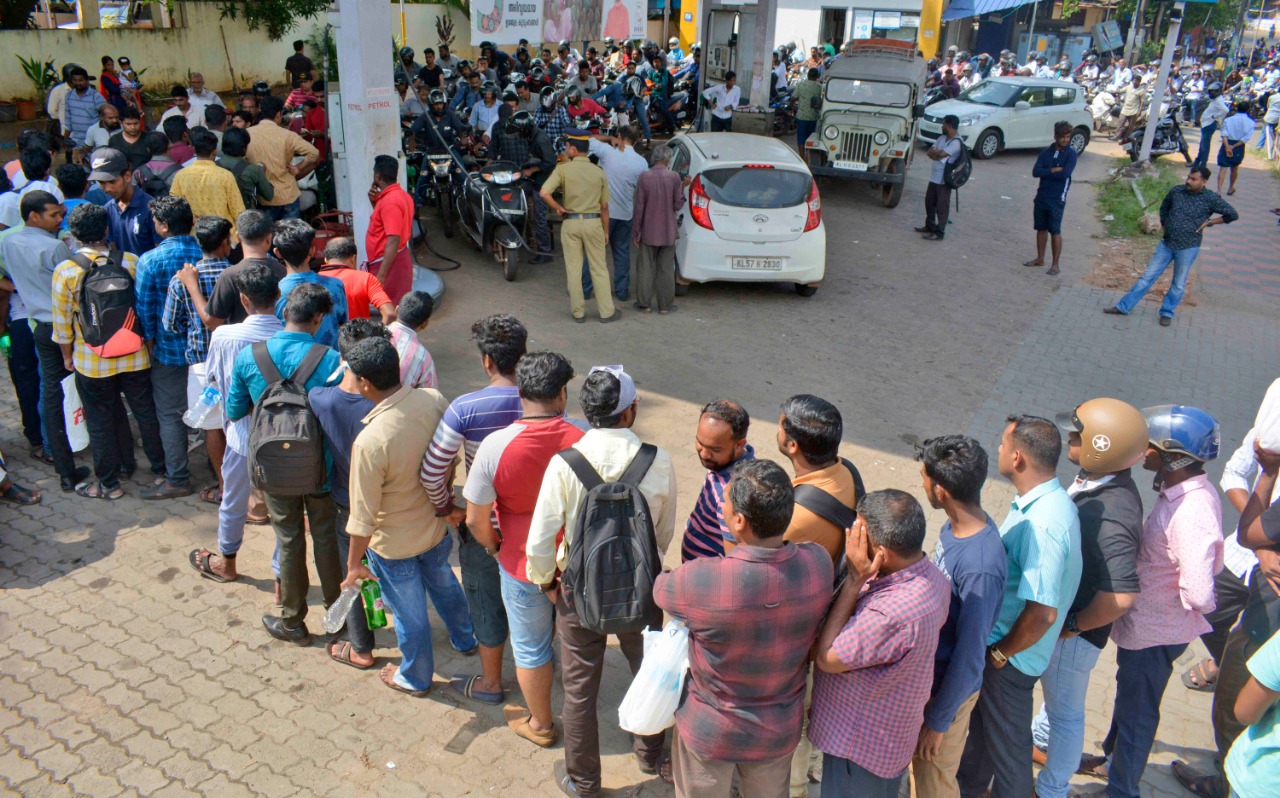 Hartal: Life comes to standstill in Kerala on Saturday

Chandrakantham, a 50-year woman devotee from Visakhapatnam died at Appachimedu due to heart attack on Saturday while climbing the Sabarimala hills, according to Samakalika Malayalam.

Sasikala will be allowed into temple post bail: Police

Hindu Aikya Vedi state president K P Sasikala will be allowed to pay a darshan of Lord Ayyyappa at Sabarimala after getting bail from court, said the police, according to Manoramaonline.com. Police will produce Sasikala before the Tiruvalla RDO for hearing of bail application, added the website. Following the statement of police, Hindu Aikya Vedi activists stopped their protest infront of Ranni Police station and dispersed.

The Sabarimala Karma Samithi will launch an indefinite hartal from Sunday onwards if the police do not release Hindu Aikya Vedi state president K P Sasikala and allow her to have darshan at Sabarimala. Read full story here 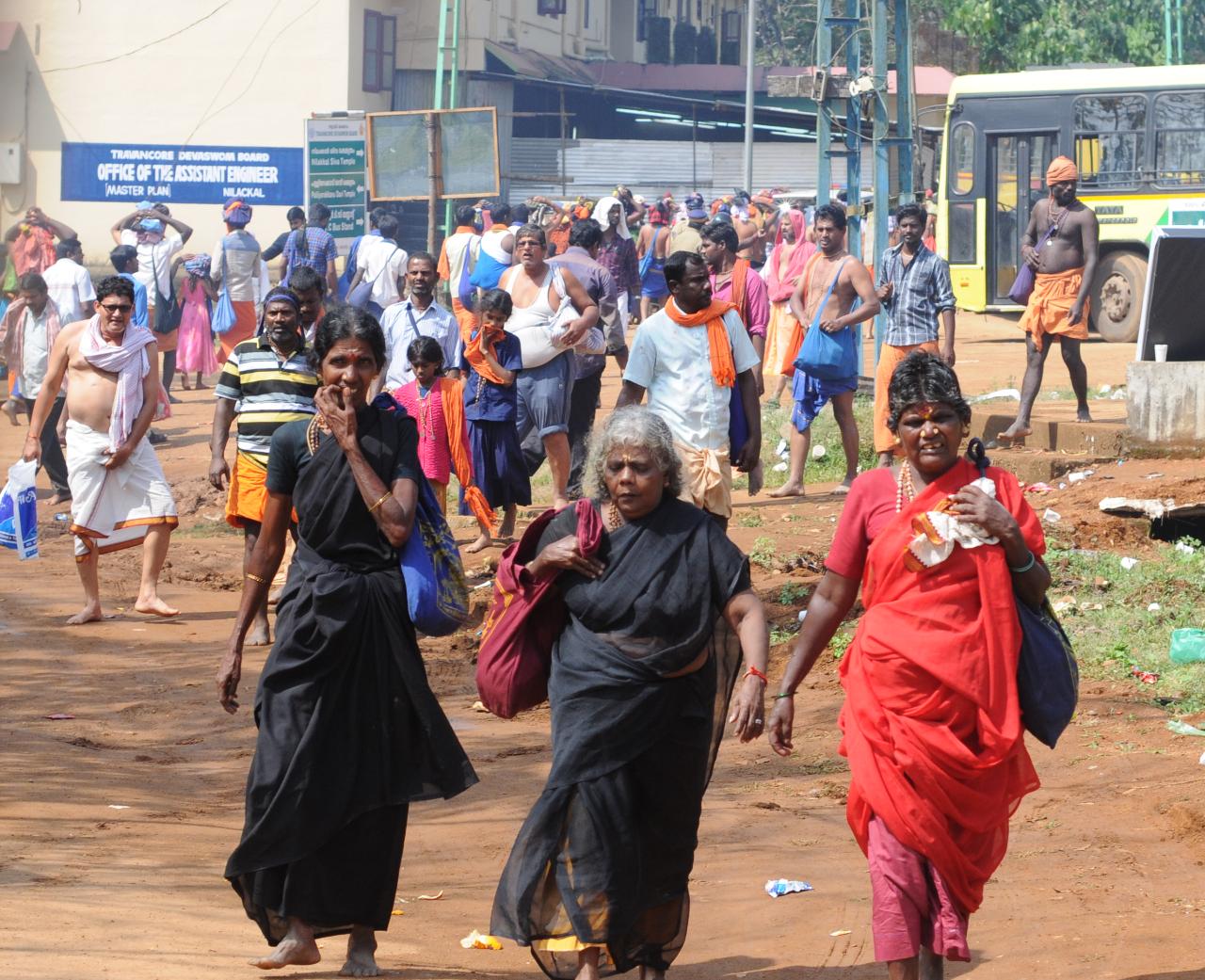 The TDB's move comes a day after the LDF government, at an all-party meeting, took a firm stand that it was bound to implement the top court order and rejected suggestions by opposition parties that it seek time from the court.

Travancore Devaswom Board to move SC on Monday

The Travancore Devaswom Board, which manages the Sabarimala shrine, would move the Supreme Court on Monday seeking more time to implement its order allowing women of menstrual age to offer prayers at the Lord Ayyappa temple.

KSRTC, which was earlier forced to stop their services due to violent protests at different parts of Kerala, resumed special trips to Sabarimala with police priotection.

Drop in number of pilgrims at Erumely

There has been a considerable fall in the number of pilgrims as many hotels remain shut due to the hartal, media reports state. (Photo | EPS/Albin Mathew) 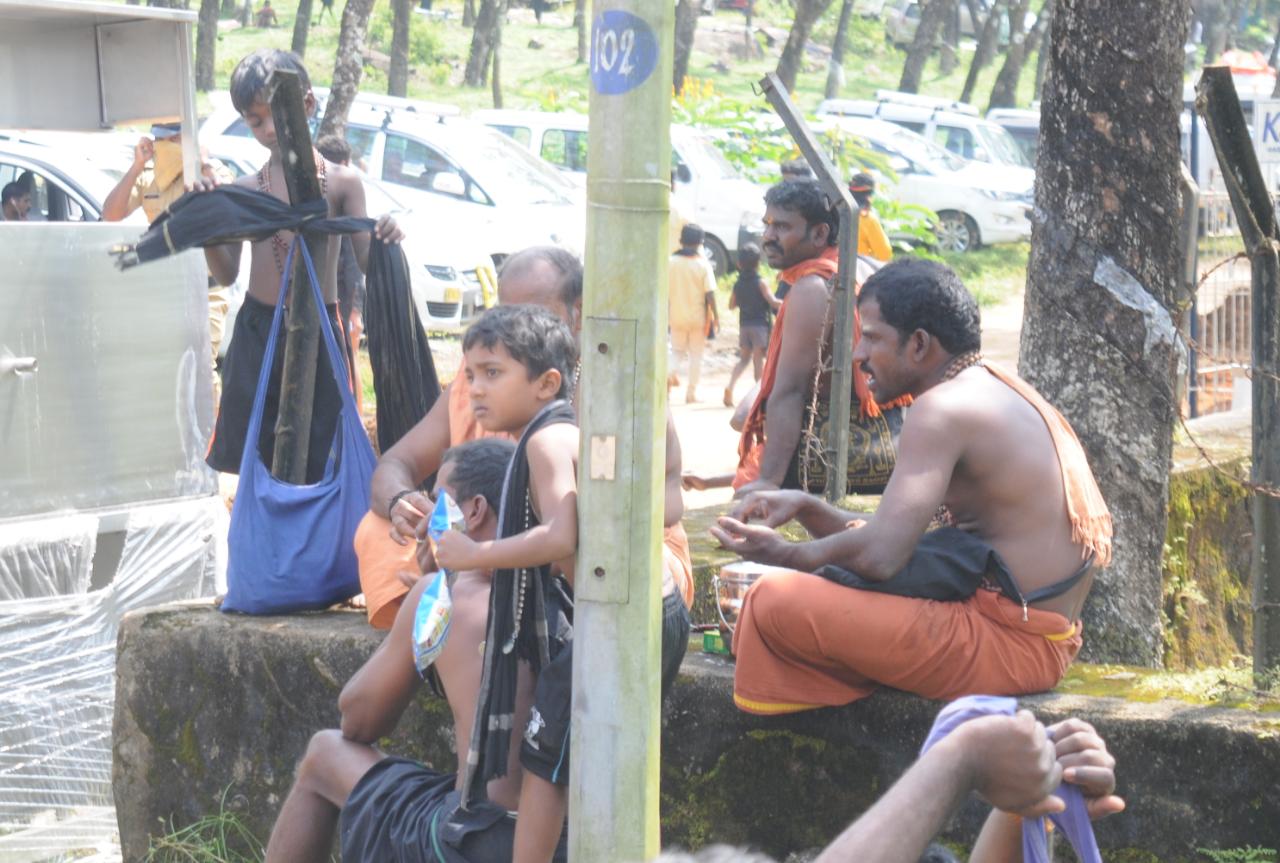 The service launched by city police have become a relief for commuters who are stranded at various locations in the city following the hartal. A scene from Ernakulam South. (Photo | EPS/ Albin Mathew)

Pilgrims are stuck in different parts of Pathanamthitta due to the violent protests. The right-wing protestors are camping in Sabarimala to create trouble, the minister told media.

The Congressman accused BJP of supporting the right-wing outfits in treating the people of Kerala like hostages.

The VHP leader refused bail and said her hunger strike will go on as supporters in large number reach the police station in Pathanamthitta, reported Malayala Manorama.

BJP state president Sreedharan Pillai while speaking to Express said, "Sasikala Teacher was going to Sabarimala sannidhanam with Irumudikettu and was arrested by police without any provocation. She reached Marakoottam by 7.30 and was detained. She was taken into police custody in the midnight by 1.30 and this is nothing but policeraj under the tyrannical rule of Pinarayi Vijayan. BJP strongly supports the hartal called by the VHP and Hindu Aikya Vedi against the arrest."

CPI state secretary Kanam Rajendran said the security at the hill shrine was further tightened as per the central government's demand. The left government has no intention of turning Sabarimala into a war zone, he told media.

Sasikala refused police offer to grant bail and asked them to remand her in custody instead.

Rahul Easwar leaves Nilakkal following police warning him of arrest if he continues to stay at the base camp, reports Mathrubhum The activist said he will return to Pampa with more protestors if Dewaswom Board is not given more time to implement the SC order.The Board on Friday decided to go to SC seeking more time, took a U-turn on Saturday and confirmed that it will not request the apex court for the same.

Work on rape, sexual harassment rather than hurrying to to enter Sabrimala: Taslima Nasreen tells activists

I do not understand why women activists are so eager to enter Sabarimala. Better they should enter the villages where women suffer from domestic violence, rape, sexual abuse,hate, where girls have no access to education, heath-care,and no freedom to take a job or get equal pay.

#Sabarimala Roads empty and shops remained closed on Saturday morning at Vadasserikkara, a major town about 55 kms away from Sabarimala, following state wide hartal called by VHP to protest arrest of its leader Sasikala at Sabarimala @NewIndianXpress pic.twitter.com/WzqaFLKZ0J

Now we are on Telegram too. Follow us for updates
TAGS
Sabarimala Sabarimala verdict Sabarimala row KP Sasikala K Surendran