Security forces were forced to open fire at over five places to control mobs who were on a rampage. Sixteen of the injured have been admitted to the Guwahati Medical College and Hospital.

GUWAHATI: At least two persons were killed in separate incidents in Assam as thousands defied curfew to join massive protests against the passage of the Citizenship (Amendment) Bill on Thursday and later attacked homes of BJP, Asom Gana Parishad and RSS leaders.

Prime Minister Narendra Modi appealed for calm, assuring people their rights will be safeguarded. The entire Assam, except for the lower region, remained tense with the Army being called in at several places and the Assam Rifles patrolling in Tripura. Security forces were forced to open fire at over five places to control mobs who were on a rampage. Sixteen of the injured have been admitted to the Guwahati Medical College and Hospital. 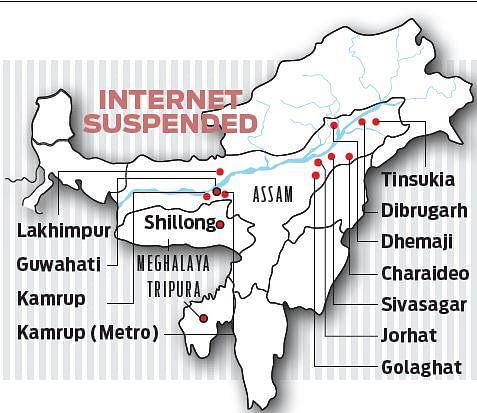 Reports from Tinsukia said several shops were burnt and a Bihar man employed in a shop was killed in an arson attack.At Lachit Nagar in Guwahati, protestors confronted security forces, which resulted in police firing. A 20-year-old sustained abdomen injuries and died at the Guwahati Medical College and Hospital where he was admitted.

Police firings were also reported at Hathigaon and Basishta areas of Guwahati, which left about eight persons injured. In another firing in the Downtown area of Guwahati, there were reports of an arson attack by a rampaging mob. At Lalunggaon, seven persons, including police personnel, were injured in a pitched battle with groups that pelted stones.

The disruptions and protests forced authorities to extend the initial 24-hour ban on internet and mobile services by another 48 hours. Hundreds of vehicles were reported stranded in various cities of Assam due to heavy blockade.

Even Army flag marches in Guwahati, Dibrugarh, Jorhat and Tinsukia and several other towns did not deter protestors.

The police said the home of BJP’s Chabua MLA Binod Hazarika was torched. Chief Minister Sarbananda Sonowal’s aide Shanatanu Bharali’s house and that of BJP MLA Angoorlata Deka were stoned. Also, the houses of several AGP and RSS leaders and their offices were attacked. An RSS official said the organisation’s office in Dibrugarh, Sadya and Tezpur had been stoned.

Earlier, thousands marched to Lata Shilp Playground in Guwahati at the All Assam Students Union’s (AASU) call to defy curfew and protest the CAB. The meeting continued for hours.

“This fight against the bill will be very long,” AASU chief advisor Samujjal Bhattacharya told the gathering. Popular singer Zubeen Garg also appealed to people and the artist community to join the AASU-led agitation. Protestors dispersing after the meeting rallied at Ambori before the AGP headquarters and attacked it.

Meanwhile, a person identified as Krishna Phukan jumped into flames lit with tyres in Lakhimpur district of Assam. He sustained 40 per cent burns.

Dibrugarh
CM Sonowal’s house attacked
Curfew imposed in Dibrugarh for an indefinite period after protesters targeted the houses of Chief Minister Sonowal and Union minister Rameswar Teli in the district. Five columns of the Army were deployed.

Guwahati
Assam DGP’s convoy stoned
Stones were thrown at Assam Police chief Bhaskar Jyoti Mahanta’s convoy. The cavalcade was on the Guwahati-Shillong Road near Christian Basti when it was attacked. It had to stop several times as the entire stretch was blocked.

Guwahati
Cricket at the time of protest
A U-23 CK Nayudu Trophy match went on at the Mangaldai stadium, around 70 km from Guwahati, after organisers pacified the protestors. But the Ranji Trophy match between Assam and Services was called off on Thursday.

Pinarayi, Amarinder against CAB
Opposition against the CAB snowballed with Kerala CM Pinarayi Vijayan and his Punjab counterpart Amarinder Singh saying they will not implement it. Bengal CM Mamata Banerjee has already announced she will block it