How India's water ends up everywhere but India, the largest water exporter

Despite the ongoing water crisis in cities like Chennai, the country's data presents itself to be one of the largest's exporters of water through farm produce.

As a child in 1943, the Indian economist and Nobel laureate Amartya Sen watched one of the worst famines of the 20th century sweep through his native Bengal. Contrary to the popular image, the disaster didn’t manifest as a widespread shortage of food, he later wrote. The middle classes hadn’t “experienced the slightest problem during the entire famine,” which primarily affected “landless rural labourers” instead.

That observation carries an important lesson for India as it runs short of a commodity even more fundamental than grain: water. As Sen showed, famine doesn’t simply result from supplies running out, but from prices being pushed beyond the reach of the neediest. Similarly, India’s current drought isn’t happening so much because of an absolute shortage of water, as its misallocation and mispricing.

That’s shown most dramatically by the crisis in Chennai. While the city is now dependent on imported water by tankers to slake its thirst, India simultaneously has the title of the world’s biggest water exporter. 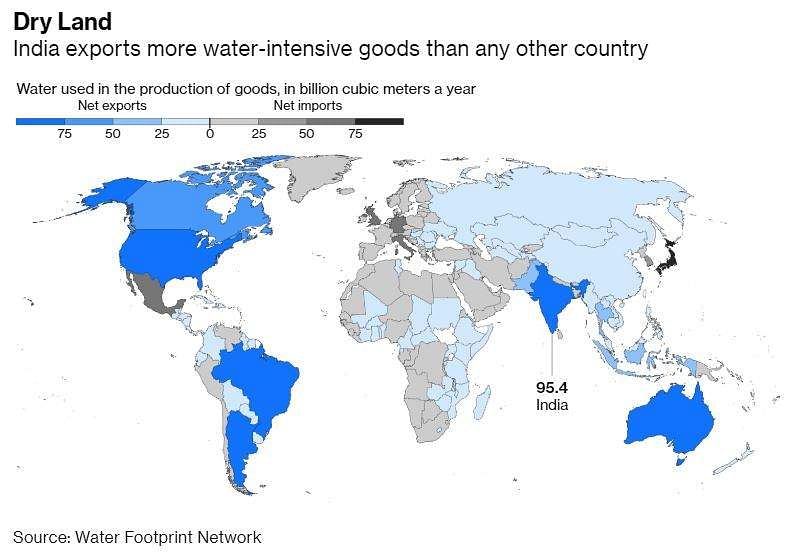 So-called virtual water exports – the molecules of H20 embedded in exported goods, alongside those rendered unusable by the production of those goods – amount to a net 95.4 billion cubic meters a year, according to data collected by the Water Footprint Network, a group that encourages thriftier usage. This makes India a bigger exporter of water than far better-endowed countries such as Brazil, Russia, the U.S. and Canada, and represents nearly four times the 25 billion cubic meters consumed by India’s households and industrial enterprises.

Most of that comes down to the fact that India’s largest agricultural exports are rice and cotton, which both require thousands of litres of water for every kilogram of product. Sugar and water buffalo meat, two of the other leading farm exports, are also water-intensive.

There’s no scarcity of these crops in global terms. India blocks rice imports with tariffs and typically sends about 10 per cent of its crop overseas. That puts the country on par with Thailand for the title of the biggest exporter and contributes to a worldwide glut of rice, expected to hit a record 172 million metric tons in the 2020 crop year. Cotton prices have fallen 20 per cent over the past year, with a global stockpile equivalent to about 60 per cent of consumption. Sugar hit its lowest price in a decade last August.

Putting so much water into fattening rice grains and swelling cotton bolls seems a criminal waste of a precious resource that urban areas are crying out for. As my colleague Mihir Sharma has written, 21 Indian cities will start running short of groundwater by next year, including New Delhi and Bengaluru, while 200,000 people in the country die each year because of a lack of access to safe water.

If India wants to grow the economies of these cities, it needs to provide the basic resources necessary to make them function. Yet while urbanites are having to watch every sip they consume, farmers are living high on the hog. About 70 per cent of agricultural water use comes from groundwater, much of it pumped out of the soil with heavily subsidized, coal-fired electricity and then used in a notoriously wasteful fashion. 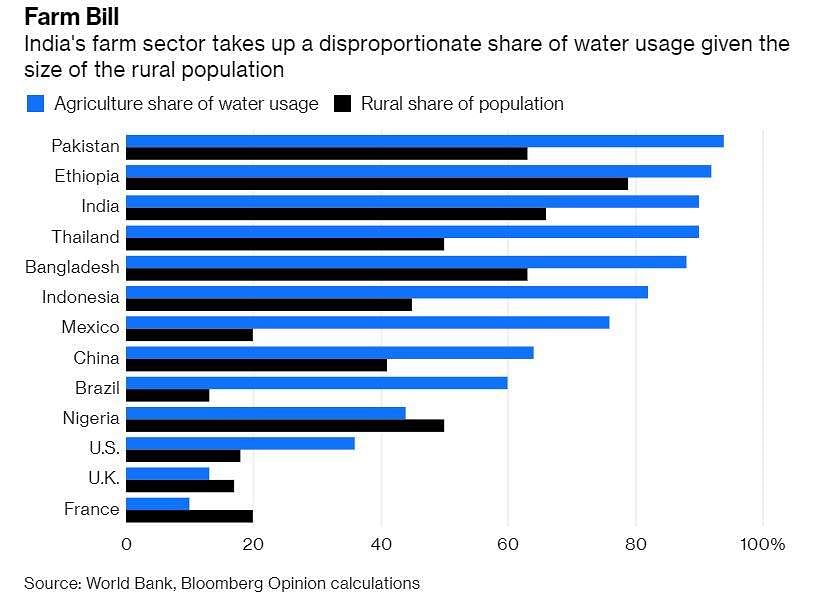 In the Chennai basin, about 79 per cent of water is set aside for agriculture and livestock farming, with just 11 per cent going to domestic use and another 10 per cent to industry. Nationwide, the figures are even more tilted toward the farm sector. In a country where a third of the population lives in cities, agriculture uses about 90 per cent of fresh water, compared with 64 per cent in China, 60 per cent in Brazil and 44 per cent in Nigeria.

One view is that this uneven allocation is simply the price India pays to support its rural poor. That’s not quite right. The farmers who have access to pumped groundwater aren’t typically low-income smallholders, but larger-scale rural business owners with the collateral to finance purchases of pumping equipment.

ALOS READ| Amidst TN water crisis, this pipeline is losing 10 litres of drinking water every minute!

These figures constitute a powerful political grouping that has resisted measures, such as power metering and more generous diversions to cities, which are needed to avert India’s urban water crisis. The rural poor don’t do so well. If anything, small-scale farmers reliant on hand-drawn wells are even worse off when the water table is being pumped away for nothing by their wealthier neighbours.

That status quo may be on the verge of breaking. Prime Minister Narendra Modi has vowed to give every household in the country access to piped drinking water by 2024, a target that will inevitably require farms to take a smaller share of the pie. Worse, climate change and the ongoing over-extraction of groundwater are already pushing the system to a breaking point.

It’s the same old story that Sen observed. As in 1943, India’s poor and landless (whether in urban or rural areas) are the ones who suffer, while the wealthy and landed prosper. If Modi wants to deliver on his electoral promises, that’s going to have to change.

(The views, thoughts and opinions expressed in the article belong solely to the author)

All leaders know that their phones are tapped: NCP chief Sharad Pawar