The four-storey structure collapsed around 11.40 am and the fire brigade got the first information at 12.10 pm.

MUMBAI:  An illegal portion of a century-old building in the congested Dongri area of South Mumbai collapsed on Tuesday killing at least 11 people. While rescue workers managed to save eight lives, several others are still feared trapped under the debris.“It is difficult to say how many are still trapped, as nobody has a reliable headcount of people staying in the building,” said a fire officer on the site.

Confusion prevailed over the name of the building, its ownership, the authority responsible for it and whether it was declared dangerous or not. There were claims and counter-claims between the Maharashtra Housing Development Authority (MHADA) and the BrihanMumbai Municipal Corporation (BMC) regarding the structure throughout the day even as Chief Minister Devendra Fadnavis said the first priority is to save lives.

The four-storey structure collapsed around 11.40 am and the fire brigade got the first information at 12.10 pm.

The deceased and the injured have been identified as: 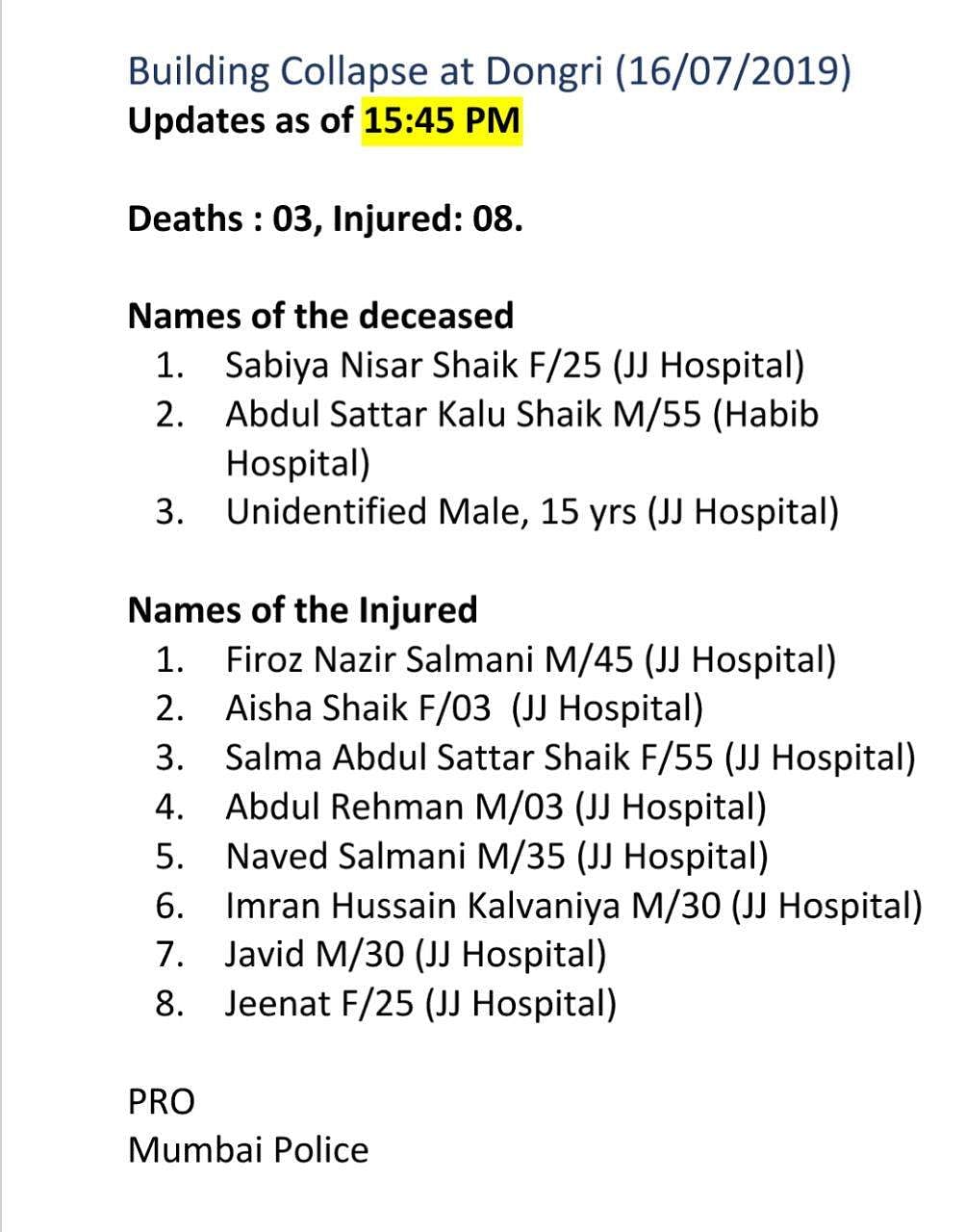 Narrow lanes in the Abdul Hamid Durgah area of Dongri in South Mumbai made it very difficult for the official agencies to reach the spot. While local people had begun rescue operations along with fire brigade and BMC officials, the NDRF team could reach the spot only after about two hours, said, officials.

At least 15 families were living in the building, which was declared dilapidated and had already been handed over to a developer for redevelopment, officials added.

ALSO READ: Will take action against those responsible for lapses, says Housing Authority

“The building belonged to Maharashtra Housing Development Authority (MHADA). However, it had been given No Objection Certificate (NOC) for redevelopment and a developer was appointed by local residents in 2012,” said Uday Samant, Chairman of MHADA.

As the building collapsed it sent shock waves shaking adjacent buildings. As the residents complained about the shocks, rescue operators vacated the adjoining buildings as safety measures.

“The building was about 100 years old. We had given permission to redevelop that area. We will know after investigation if the redevelopment initiative was delayed. Right now we are focusing on rescuing trapped people,” said Chief Minister Devendra Fadnavis after the cabinet meeting.

Building safety is the most serious concern in the South Mumbai area where the concentration of old buildings is very high. According to statistics, while around 499 of such buildings have been declared “dangerous” only about 70 have been vacated and an even lesser number have been cleared for redevelopment.

Meanwhile, the name of the ill-fated Kausar Baug Building, which crashed on Tuesday killing at least two persons, is mysteriously omitted from a comprehensive list of 499 "dangerous" buildings prepared by the BrihanMumbai Municipal Corporation (BMC), said an RTI activist.