Lynchings a conspiracy: Activists in Jharkhand

Mob assaults in Jharkhand took place irrespective of the religion and caste of the victims.

RANCHI : THE death of 24-year-old Tabrez Ansari, days after he was beaten up brutally by a mob in Saraikeala, marked the 18th such incident in the state in the last three years.

The mob assaults have happened irrespective of religion or caste of the victims. The attacks have claimed the lives of eleven Muslims, four Hindus, two Christians and one tribal man in different districts of Jharkhand. 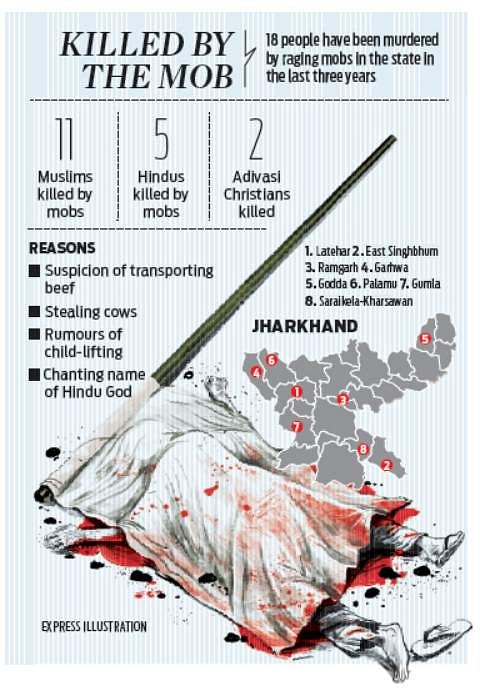 A team of activists and representatives of organisations associated with the Jharkhand Janadhikar Mahasabha, which visited Ansari’s village, Kadamdiha where he was brutally thrashed, however, observed that the changing pattern of lynchings, as seen in the last few cases, seems to be part of a political conspiracy. “The pattern of lynchings in Saraikela and in Gumla is disturbing, as the crowd, while thrashing the victim, was made to raise slogans of ‘Jai Sri Ram’ and ‘Jai Bajrang Bali’, as if to convey a message to a particular community. Apparently, they (the attackers) also did not have any fear of the police. Else, they wouldn’t have filmed the incidents and put them on social media,” Ashok Verma, convener of Jharkhand Loktantrik Manch, who was also a part of the fact finding team which visited Saraikela on Wednesday, said.

“These incidents seem to be politically motivated. They will only drive a wedge between the two communities,” he said.

Verma said that the role of police was also not satisfactory in the latest case, as they arrived at the scene three hours after the incident. “Moreover, the officer-in-charge allegedly asked Maqsood Ansari to leave the place or he will meet the same fate, when he reached the police station to meet his nephew (Ansari),” Verma said.