While citizens were glued to their television screens to catch live updates of the historic Ayodhya judgment by the CJI-led Supreme Court bench, hashtag #hindumuslimbhaibhai was seen trending on Twitter.

Many took to the microblogging site stating whatever might be the judgment, 'hindumuslimbhaibhai' meaning Hindu and Muslim brotherhood shall remain in the country. 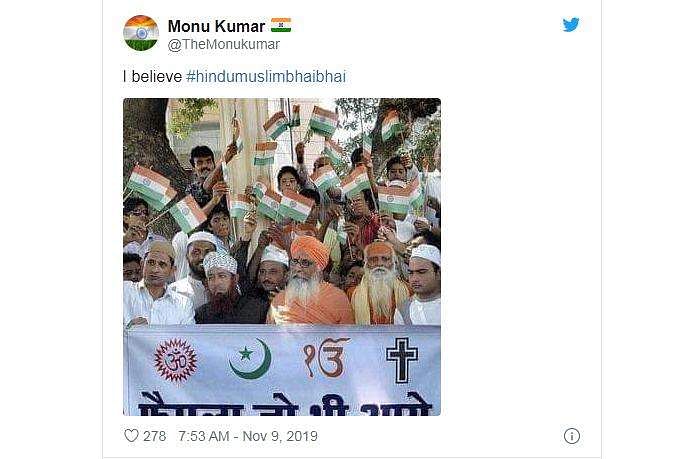 The controversial Ram Janmabhoomi-Babri Masjid issue has been a source of major contention between Hindus and Muslims for over 130 years in India.

The 1992 Babri Masjid demolition and the 2002 Godhra riots have been evidence of the large scale violence that ensued due to the disputed land.

The temple town of Ayodhya has been turned into a fortress to avoid communal violence during the course of the day.

ALSO READ | Ayodhya explained: All you need to know about Ramjanmabhoomi-Babri Masjid case

Media organisations were asked to treat the judgment in a sensitive manner and avoid sensationalism.

However, rather than focussing on the judgment of Supreme Court netizens encouraged the spreading of peace. Twitteratis shared messages of peace, unity and non-violence as the Ayodhya verdict unfolded.

Expected hate tweets when I opened twitter but seeing this made me feel peace and assured me that
WE'RE IN THIS TOGETHER #hindumuslimbhaibhai #AYODHYAVERDICT
7 mins left. pic.twitter.com/4COebwffIF

Unity to be real must stand the severest strain without breaking.#hindumuslimbhaibhai pic.twitter.com/J6oXONqheh

In a unanimous judgment, the five-member Constitution bench, comprising Chief Justice Ranjan Gogoi, CJI designate S A Bobde, Justices D Y Chandrachud, Ashok Bhushan and S A Nazeer directed the Centre to form an Ayodhya trust for building a Ram temple and announced a five-acre alternate land for the Muslims.

No matter what the verdict is, this is the India that we all live in... Yeh mera desh hai, yeh hamara desh hai... #AYODHYAVERDICT #hindumuslimbhaibhai #AyodhyaCase pic.twitter.com/U4QnnufybZ