During the debate, a BJP lawmaker slammed Delhi Chief Minister Arvind Kejriwal and said that all that he has given to Delhi for free is pollution.

NEW DELHI: Bharatiya Janata Party (BJP) MPs Ramesh Bidhuri and Hans Raj Hans on Tuesday did not attend the debate in Lok Sabha over air pollution, while Union Minister and MP Harsh Vardhan was speaking in the Rajya Sabha on the Surrogacy (Regulation) Bill, 2019.

After the debate, the Aam Admi Party (AAP) took to Twitter to lash out at the BJP MPs for not being present in the Parliament. 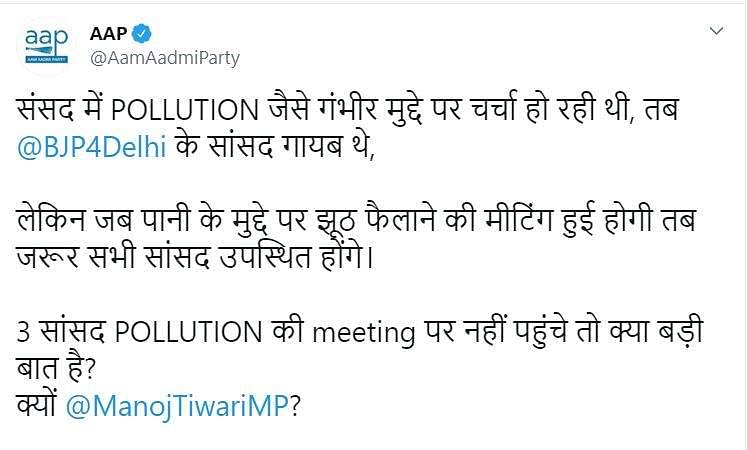 During the debate, BJP lawmaker Parvesh Sahib Singh Verma slammed Delhi Chief Minister Arvind Kejriwal and said that all that he has given to Delhi for free is pollution.

Meanwhile, TMC MP Kakoli Ghosh Dastidar said, "Out of the 10 most polluted cities in the world, nine are in India. It is quite unnerving that a foreign Premier of a country who was on a visit to India, made an adverse comment. I would like to draw government's attention towards it."

She added, "When we have a 'Swachh Bharat Mission', can't we have a 'Swachh Hawa Mission'? Shouldn't we be ensured the right to breath clean air?...In Delhi we might be staring at a situation of mass asphyxia," she added.

On the other hand, the Congress party slammed the central government for air pollution issue and recommended that there should be a committee to look into pollution and climate change.

"When the pollution issue occurs every year in Delhi then why is it that no voice is raised from government and this House over this? Why do people need to knock the doors of the Supreme Court every year over this issue? It is a matter of grave concern," party leader Manish Tewari said in Lok Sabha on the second day of the winter session of the Parliament.

"It is important that today this House gives a message to the nation that this (House), comprising the people whom they chose as their representatives, is sensitive and serious about this issue. It is not only about air pollution; our rivers are also polluted today," Tewari added.

The Congress leader went on to say that that just like there are "standing committees such as Committee on Public Undertakings and Estimates Committee, there should be a committee to look into pollution and climate change."

After days of 'severe' and 'very poor' air quality, Delhi and its nearby areas witnessed a change with AQI improving to the 'poor' category on Tuesday.