The sources said that Melania will be received by Arvind Kejriwal, who was sworn in as the Chief Minister for the third time on Sunday along with Manish Sisodia.

NEW DELHI: US First Lady Melania Trump is likely to visit a Delhi government school on February 25 during her India visit. According to sources, Chief Minister Arvind Kejriwal and his deputy and education minister Manish Sisodia will receive and accompany Melania at the school, whose location is kept under wraps for security reasons. 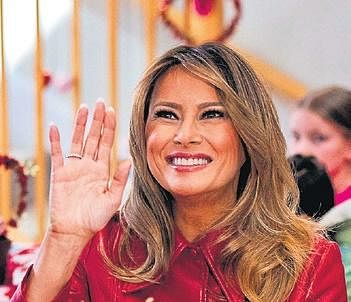 She will also attend a ‘Happiness Class’, which is a brainchild of the AAP government. In 2018, the Happiness Class was introduced for all children between nursery and Class 8 in Delhi government schools for their emotional well-being. The curriculum involves a “happiness period” of 45 minutes and five minutes of meditation before each class.

ALSO READ: Not 70 lakh, but one lakh to attend Donald Trump roadshow in Ahmedabad

It is not the first time that this innovative approach has been in the news for positive reasons. Former Chief Justice of India Ranjan Gogoi had lauded the efforts of Aam Aadmi Party government.Sources in the Delhi government said the US First Lady will spend around 45 minutes to understand the concept of this initiative. “This visit is being organised by the US administration. Indian authorities were not involved in the planning,” the MEA spokesperson said.

CCTV cover along routes
All routes leading to Hotel ITC Maurya, where President Donald Trump is likely to stay, and the places he is likely to visit in the national capital will be under heavy CCTV surveillance, officials said on Thursday. They said cameras will be monitored 24x7 in a central control room by senior officers during Trump’s visit.