West Bengal, with 2,677 confirmed COVID-19 cases -- at number eight in terms of case loads -- has a nearly 9 per cent death rate or three times the national average.

NEW DELHI: Amid surging COVID-19 cases in India, the only solace the country seems to have is relatively low death rate -- at nearly 3.2 per cent -- when compared with most other countries hit badly in the pandemic.

But the dramatic difference in the case fatality rate among states with the highest caseloads in the country has even the governments and public health experts baffled.

The death rate due to the infectious disease varies from 0.6 to nearly 9 per cent in the country -- a phenomenon that has not been fully explained well so far -- even as the total coronavirus cases have crossed 96,000 and total deaths have reached 3,029. 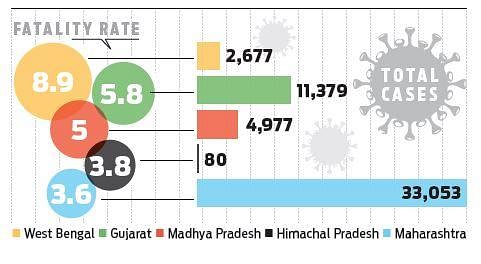 Back home, West Bengal, with 2,677 confirmed COVID-19 cases -- at number eight in terms of case loads -- has a nearly 9 per cent death rate or three times the national average, while Tamil Nadu, the third worst-hit state with 10,585 total confirmed cases, has this figure at 0.7 -- among the lowest in the country.

Gujarat, considered better off than many northern states with very poor health infrastructures, has the second highest case load and also the second-highest Case Fatality Rates (CFR) -- at 5.7 -- among the states that have reported significant fatalities due to the infection so far.

In Madhya Pradesh, also among the states ravaged by the virus, the CFR stands at 5. But in Delhi, which has the fourth highest case load in the country, the CFR at 1.6 is half of the national average.

Maharashtra, with the highest case tally and the highest recorded COVID-19 deaths has a CFR of 3.7 as of now -- a little above the national CFR.

Overall, seven states in the country have a CFR higher than the national average, prompting the Centre to ask states to quickly identify individuals with influenza like symptoms and also pay attention on medical management of hospitalized patients.

"We have been analyzing why more patients are succumbing to the infection in some states as compared to others but have not been able to pinpoint exact reasons," said an official in the Union ministry of health and family welfare.

Public health specialists too have been trying to fit the pieces in the puzzle.

"The highest CFR in West Bengal is very surprising because it has one of the country's best hospital-beds-to-population ratios," said Dr Shahid Jameel, senior virologist and CEO of Wellcome Trust DBT India Alliance.

"I would have guessed its low tests per million people as a possible reason, but states like Bihar and Assam with a similar rate of testing are showing much lower CFRs. So, it it appears to me that West Bengal is showing effects of low testing and truthful reporting of deaths," he said.

"Other states may not be giving out correct death figures, perhaps not by design but due to poor health infrastructure -- for example, Bihar."

Some others believe that West Bengal may have a relatively higher prevalence of COVID-19 than confirmed.

Now we are on Telegram too. Follow us for updates
TAGS
fatality rate Coronavirus COVID-19 Coronavirus deaths Coronavirus Outbreak