Why Jat support to farmers' stir is worrying BJP

Having weaned away the community — which is mainly into farming and hence driving the current agitation — from the rivals’ fold, the BJP now faces its biggest test yet vis-a-vis the Jat vote bank.

LUCKNOW/CHANDIGARH/JAIPUR: With the farmer protest moving away from Delhi borders to the hinterlands, it would seem the government is now breathing easy, which has given it the confidence to bat on the front foot for the three new agriculture laws. But behind the brave front it is putting up, the ruling BJP at the Centre would clearly be nervous, as the anger among farmers, especially in the Jatlands of north India, may singe the party at the hustings.

The BJP’s Jat citadel in three states — Uttar Pradesh, Haryana and Rajasthan — is on shaky grounds. Having weaned away the community — which is mainly into farming and hence driving the current agitation — from the rivals’ fold, the BJP now faces its biggest test yet vis-a-vis the Jat vote bank.

With panchayat polls in Haryana and UP round the corner, the saffron party’s challenge is immediate in these two states.

With panchayat elections due in April and state polls just a year away, it’s in Uttar Pradesh that the BJP is feeling maximum heat, especially since Rakesh Tikait has taken over the leadership of the farmer agitation after the Republic Day violence.

The Tikait brothers — Naresh and Rakesh — from Sisauli village of Muzaffarnagar head the Baliyan Khap that is ranked as one of the biggest among the Jat community.

The Jat votes decide the fate of a party in about 20 Assembly and 17 Lok Sabha seats. Their support helped the BJP gain big in 2014 and 2019 Lok Sabha polls and the 2017 state elections.

That’s the reason the farmer protest is giving the ruling party sleepless nights while it has given a listless opposition a chance to revive its political fortunes.

The massive turnouts at the Kisan Mahapanchayats in Muzaffarnagar, Bijnor and Meerut have heightened the BJP’s worries as parties like the Rashtriya Lok Dal and the Congress are trying to capitalise on the stir.

An anxious BJP is now strategising to find a solution so as not to let the Jat vote bank slip at any cost. The party brass recently had a closed door meeting with the Jat leaders of western UP who pressed for an urgent solution.

The party has deployed senior western UP leaders to clear the misconceptions about the three laws. State ministers were tasked with holding meetings with farmers to convince them.

Nearly 96 per cent of UP’s Jat population is spread across 11 western districts and is mainly engaged in farming. Barring sugarcane, most of the crops grown, such as wheat, paddy and maize, are covered under the MSP regime. That’s why the protesting farmers’ demand to provide legal guarantee to MSP has found a strong resonance.

Jats constitute the largest population that’s into farming in the state. The Centre’s firm refusal to repeal the laws and the state’s tough action against the protesters has antagonised the community. More than half-a-dozen mahapanchayats have been held in the state. The Jats have a strong in presence in 11 districts which have 47 out of the total 90 Assembly seats.

Jat and Jat Sikh support holds the key to victory in these 47 (over 50 per cent) seats, of which the Congress won 19 and the BJP 18 in 2019. In the 2019 Lok Sabha elections, the BJP made a sweep winning all 10 seats with a large number of Jat farmers voting for it.

However, political analysts term those victories to the Modi factor. They say the 2016 Jat agitation over OBC status had made the community turn away from the BJP.

The farmer movement has revived the anti-BJP sentiments and alienated the community which can cost the BJP dear in polls.

The Jat community, which has the largest population among the farmers, holds the key to victory in 45-50 out of 200 Vidhan Sabha seats.

Though spread across Rajasthan, the Jat vote is critical in about a dozen districts.  About 90% of Jats are farmers.

The main crops they grow are wheat, cotton, rice, barley, mustard, maize, jowar and pulses, most of which are covered under the MSP system and are sold in mandis. That’s the reason the state’s Jats are firmly against the farm laws.

“Even the present system is not perfect, but at least the MSP works as a benchmark. But the Modi government is not willing to give any legal guarantee for continuing the MSP,” said Mahendra Singh, general secretary of the Rajasthan Jat Mahasabha. 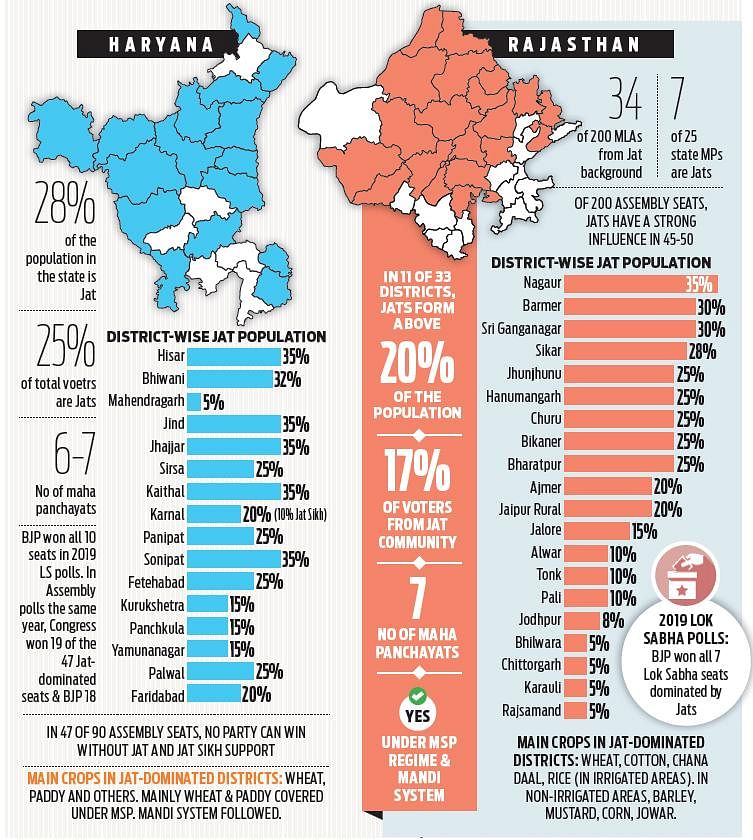