The current stentorian discourse sans facts, which shifts the blame on to the government for the supply chain failures of hospitals, misses a more critical fact.

"One-fifth of Indian districts have not reported any Covid-19 cases for the last seven days. We seem to have flattened the Covid curve,” declared Union health minister Dr Harsh Vardhan two months back, on February 15. By then the daily infections that had peaked to 90,000 cases last year, were down to less than 9,000. But things changed dramatically into an unprecedented disaster in April (see table). The grim situation called for a huge national resolve to deal with the crisis. But the unfortunate deaths caused by the shortage of oxygen in Delhi made the ecosystem so emotionally surcharged that all facts and reasoning became irrelevant. The missing facts misdirected the public discourse, distorted the narrative on Covid and damaged the national will to face the challenge. Look at what crucial facts were missed.

The oxygen shortage-induced deaths first occurred in Delhi’s corporate hospitals. These hospitals made huge profits, even more last year, thanks to the pandemic. That provoked the National Herald site to write an article titled Profit in times of COVID-19: Is it time to take over private hospitals? (20.6.2020). The report said “Rs 25,090, Rs 53,090, Rs 75,590, Rs 5,00,000, Rs 6,00,000, Rs 12,00,000 — these are not random numbers. These are the per day costs and cumulative two-week costs for a bed in private hospitals in Delhi if one gets Coronavirus.” Adding the cost of the personal protection equipment (PPE), tests and medicines, the bill equalled Indians’ annual income, it said. Home treatment fee was no less; it varied from Rs 5,700 to Rs 21,900 a day plus cost of tests. The Herald report cited a writ against this loot in the Supreme Court. 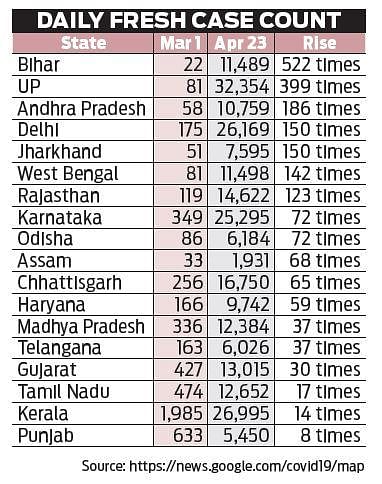 It is these hospitals that now filed writs under the constitutional right to life, for oxygen supply by governments — for which they charge the patients Rs 5,000 per day! Anyone heard of these horrendous facts of the loot in the uproarious debate on oxygen shortage causing deaths? This is important because the profiteering hospitals could have set up their own oxygen plants at minuscule cost. Read on.

The production, trade, stocking and use of oxygen is privatised. The trade in medical oxygen is not controlled or regulated in India — though its prices are controlled by the National Pharma Pricing Authority (NPPA) — an autonomous body under the chemicals and fertilisers ministry. Producers enter into private contracts with industries, hospitals and also governments to supply oxygen. Hospitals plan how much oxygen is needed for an emergency, estimate the lead time for delivery and order accordingly. Their supply chains were long both in distance and time, particularly for Delhi hospitals, which are thousands of kilometers away from their production sources spread across several states. Supplies have to be trucked in from industrial zones in eastern India. This needed meticulous advance planning to ensure timely deliveries even during normalcy. But hospitals did not plan stocks for contingent needs and saved on costs. Did anyone hear any of these facts in the noise of the last 10 days?

Second, there is no shortage of oxygen. We produce 1,00,000 tonnes a day, with one company in Gujarat alone producing a fifth of it. Of the total produced, only a minuscule part, some 1%, is medical oxygen. Even in the Covid crisis, it may not top 5-6%. The production of oxygen, mostly captively used, is concentrated in far-off areas. Oxygen in liquid form is traded and transported through heavy, safe tankers, each of which costs Rs 45 lakh. Worse still, oxygen worth Rs 300 is stored in a cylinder that costs Rs 10,000! The distant production and multiple trade chains in oxygen, transport in tankers and stocking in cylinders created huge logistic issues even in normal times. In times of pandemic, this supply chain wouldn’t withstand stress, particularly when Delhi, where the deaths occurred, is several hundred kms away from where the oxygen has to be transported.

Profiteers failed, but shifted the blame

After the Covid first wave last year, each (Delhi) hospital should have set up their on-the-spot oxygen producing unit. A report by The Print says that a 240-bed hospital with 40 ICU beds uses oxygen worth about Rs 5 lakh per month in normal times. It costs some Rs 50 lakh to set up a Pressure Swing Adsorption (PSA) oxygen plant, which they could recover within 18 months. Every Delhi hospital could afford it. But none was ready to allocate the precious space to house an oxygen plant. They opted to buy oxygen from a thousand kilometres away instead and not make it in their backyard. The supply chain risks of oxygen were brought out last year by Cherish Paul, John Paul and Akhil Babu of the Department of Anaesthesia and Critical Care, Jubilee Mission Medical College and Research Institute, Thrissur, Kerala. In an article in the Indian Journal of Respiratory Care titled “Hospital oxygen supply: A survey of disaster preparedness of Indian hospitals,” the three experts concluded that most of the hospitals rely on a single pipeline from a single location, inviting mishaps during disasters. They recommended multiple sources of oxygen depending on the size and the hospital’s proximity to a liquid oxygen plant.

Apply this caution to the Delhi hospitals. They could themselves produce oxygen but did not. They never planned for an uninterrupted supply of oxygen during a disaster. When their supply lines for oxygen on which they profiteer failed, they cited the constitutional right to life and asked the court to direct governments to give oxygen! The off-hand and emotional response of the court actually helped to shift the blame on to governments. That changed the very discourse and narrative on Covid. Did the public have any hint of these critical facts in the last few days?

The current stentorian discourse sans facts, which shifts the blame on to the government for the supply chain failures of hospitals, misses a more critical fact. Anticipating a contingency like this, the Modi government had ordered 162 PSA plants at a cost of over Rs 200 crore in October last for government hospitals all over India. This could have produced 80,500 litres of medical oxygen per minute. This translates approximately to one ton of liquid oxygen per day per plant. But out of plants ordered for 162 hospitals, only 33 got installed. Why? Even state government hospitals thwarted the Centre’s plan for on-the-spot oxygen production facilities. The Print says, orders were placed in December but when vendors reached the hospitals for installation, many “faced resistance” from them, pretending “no space” — the real reason being vested interest to procure oxygen rather than generating the entire requirement onsite. This showed how advance planning for on-the-spot oxygen supply by the Centre was thwarted by even the state-run hospitals. In the contemporary shouting and counter shouting in the media and social media, has anyone heard about this farsighted move of the government, beyond the feeble voice of The Print?

New Covid Tsunami isn’t a return of the old

An even more critical fact that is absent in the discourse on oxygen deficit, is that the present Covid Tsunami is not the return of the old, but a totally unanticipated new one massifying like hell. The Covid curve, which began rising from March first week, gathered pace through March, rose fast in the first two weeks of April and became a Tsunami later. In just seven weeks, Bihar saw a rise of daily new cases by 522 times, UP by 399 times, Andhra by 186 times, Delhi and Jharkhand by 150 times, West Bengal by 142 times and Rajasthan by 123 times — disaster of a size, a Tsunami, beyond anyone’s anticipation. This is not the repeat of Covid 1.0 last year. It is a new, double mutant Indian variety that got generated in each place where Covid 1.0 had gone before. No expert could anticipate this. This was bound to flood hospitals and ICUs throwing all plans awry.

This unprecedented Tsunami called for shared responsibility and collective will to face it and not to miss the facts or misdirect the discourse and shift the blame. That even in the face of a national disaster like Covid we showed the lack of collective will is a matter of concern. How the opposition parties branded the vaccine, Covaxin, approved by the government for emergency use exposed this national deficit. Congress leaders Randeep Singh Surjewala, Shashi Tharoor, Manish Tewari and Jairam Ramesh shouted in chorus against Covaxin. Anand Sharma said it was dangerous. Except Rajasthan, opposition-ruled Punjab, Chhattisgarh, Kerala, West Bengal and Jharkhand created doubts in people’s mind about vaccines. Result, the people hesitated for the jab. In January only 33% beneficiaries were willing for the shot, 40% preferred to wait and 16% said ‘No’. In March, those willing rose to 57%, those who preferred to wait halved and naysayers reduced to 6%. Three precious months were lost.

Against an average daily vaccination of 30 lakh, making it 9 crore a month, only 10.8 crore had first jabs, and 1.6 crore had double jabs till March, which could have been double that number had vaccine hesitancy not crept in. Also, as a nation we let down our guard. As the Google mobility data shows, despite Covid continuing we began leading a near normal life — 78% in entertainment, 87% in parks and public places, 92% in transportation, and 120% in shopping as compared to the pre-lockdown period. And mostly without social distancing and without wearing masks. Now we have a huge challenge — to face up to which we need collective national will. Are we capable of it?

Now we are on Telegram too. Follow us for updates
TAGS
Dr Harsh Vardhan COVID-19 oxygen