Congress stranded in no man’s land

The lexicon defines juggernaut as “a massive inexorable force, campaign, movement, or object that crushes whatever is in its path”.

The lexicon defines juggernaut as “a massive inexorable force, campaign, movement, or object that crushes whatever is in its path”. The election machinery of the BJP has appropriated the moniker in India’s politics. The BJP reiterated its claim of a party with a pan-Indian presence in power, from Dwarka to Dimapur. The Congress, in stark contrast, is in power in Punjab, Puducherry and Karnataka, at the brink of BJP’s slogan of creating a Congress-Mukt Bharat.

The specific often illuminates the general eloquently. Take the Tripura verdict. The score: BJP+ 43, CPM 16, Congress 0. The score doesn’t quite tell the story. The Congress first lost power in Tripura in 1977. The score then was CPM 51, Congress 0. Since then the Congress has successfully lost elections for the past 40 years. Even if it added its tally in three polls, it would be well short of majority in the house of 60. 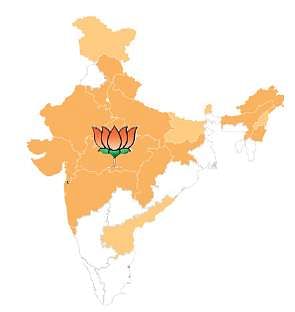 The decimation in Tripura reflects the state of the Congress. In ten states across the country, the party has consistently failed to recover ground. It was routed in Tamil Nadu in 1967 and never elected to power—its best tally of 60 was in 1991, the year Rajiv Gandhi was assassinated. Congress was ousted from West Bengal in 1977 by the Marxists and has never crossed the three digit mark in the house of 294. The party lost power in Uttar Pradesh (home to four Prime Ministers—Nehru, Shastri, Indira and Rajiv) in 1989 and its tally has not crossed 50 seats since 1991. It went out of power in Bihar in 1990. Its score card reads 71, 29, 23, 9, 4 and 27 seats—or a total of 163 in six polls. The Gujarat story is well-known. It has been out of power in Odisha since 2000, Chhattisgarh and Madhya Pradesh since 2003 and Jharkhand since 2005.

In the new millennium, the Congress has been out of power in 11 states. These states are home to over 77 crore of the 131 crore population of India. And importantly, these states account for over 300 seats in the Lok Sabha. As of Saturday the BJP on its own and with its allies is in power in states which account for 68 per cent of area, over 82 crore population and 347 Lok Sabha seats.

Undoubtedly, the big difference is the Modi Factor. But oratory has to be massaged by orchestration of messaging through door-to-door meetings and social media, and finally organisation on the ground—down to the booth-level management using concepts like panna pramukh. The BJP has borrowed both from social networks and corporate textbooks, concepts of backward and forward linkages, of aggregating angst and disaggregating responsibility for outcomes.

There is the harnessing of individual skills and then there is the ability to build an institutional framework. For instance’, the strategic placement of Sunil Deodhar as early as in 2014 delivered Tripura. At an institutional level, for two decades, the Sangh Parivar invested political capital to woo critical segments—the tribals to counter the Congress and other backward classes to crimp the influence of Mandal warriors. And it has paid off.

Yes, the Congress did well to win Punjab and contain the BJP in Gujarat. In Punjab, the party enabled Amarinder Singh to lead the charge. In Gujarat, the party outsourced politics to the trio of dissenters to enable affiliation even if subscription was not total. The young Sachin Pilot has been able to galvanize the troops in Rajasthan to deliver victories in the by-elections. Success, though, has been few and far between and ails from the affliction of randomness.

Madhya Pradesh, Chhattisgarh and Rajasthan, seen as bellwethers before 2019, go to polls soon. In Rajasthan, the efficacy of Pilot is being grounded by whisper campaigns. In Madhya Pradesh, the surfeit of leaders has left the workers confused, and in Chhattisgarh, the party is yet to find a face or a trooper to lead the charge. In Maharashtra, a significant swing state, the Congress cannot figure out which Chavan—Ashok or Prithviraj—will do what, and neither is there any clarity on the estranged relationship with the NCP. Tamil Nadu is in the throes of political turmoil and is witnessing the rollout of new parties led by two superstars. But nobody quite knows who is leading the Congress. In Odisha and West Bengal, it is not the Congress but the BJP which is occupying the challenger’s slot in the hustings and on the matrix of perceptions. The first point of data the Congress needs to look at is how many district presidents it has in place!

Again, oratory, orchestration and organisation require the lure of alternative ideas. The question, as this column has asked before, is whether RaGa has a signature tune. His predecessors had ideas (http://bit.ly/27RaGa9). Does the Congress Party president—and indeed the party—have a template? Does the Congress have ideas on how agrarian distress can be resolved, how small businesses can be helped, how jobs can be created?

The party bigwigs are excited at the response to its memes and quips on issues. Agitprop politics can be a seductive opiate – delivering eyeballs on the social media. Realpolitik demands applause be converted into affiliation, mass into momentum. It must present how it will right things, not just rant about what is wrong. The Congress needs to articulate what it stands for—not just what it is against. In the absence of necessary and sufficient conditions, the reinvention of ideology and institution, the party will be left stranded on no man’s land.

More from Shankkar Aiyar.
Now we are on Telegram too. Follow us for updates