The quest of Atmanirbhar BJP

The BJP in 2020 is an organised juggernaut with a footprint that is larger than ever.

Historically, every election in Bihar scripts a new equation on the algebra of politics for aficionados. The 2020 edition has not disappointed — the simultaneous equation haunting fertile imagination in the theatre of Bihar is whether a set outside is actually a part of a union. On the face of it, the BJP is in alliance with the JD (U) and the LJP has left the alliance in the state but continues to be in alliance at the Centre. The reigning theory, despite denials, is that post results the equation will change from BJP+JD (U) to BJP+ LJP, one where the BJP comes to power through a reverse merger with the LJP rendering the Nitish Kumar-led JD(U) outside the equation.

Lending credence to the thesis propagated in the discourse in Bihar is the course of events of the past year — the manner in which two of the BJP’s oldest allies, the Shiv Sena and the Shiromani Akali Dal, have parted company with the party and exited the saffron coalition called the National Democratic Alliance. As with economics, the course of politics is influenced by expectations. The Shiv Sena and the SAD, once dominant in their home base, expected continuum in stature and treatment — and, typically, allies tend to deploy numbers or sentiments depending on the context. On the other side of the equation, the BJP is scarcely the dependent entity that it was in the first season of the NDA.

The BJP in 2020 is an organised juggernaut with a footprint that is larger than ever. This December marks 36 years of a factoid the BJP has lived with. In the 1984 Lok Sabha polls, the BJP contested 224 seats and forfeited deposits on 108, winning just two seats. The opposition, frequently, used the 2-seat factoid as a slur and the BJP as its baseline. In 2019, the BJP contested on 436 seats and won 303 of them. More importantly, the party led in over 2,053 Assembly constituencies across states, reflecting the expansion of its allure and market share. 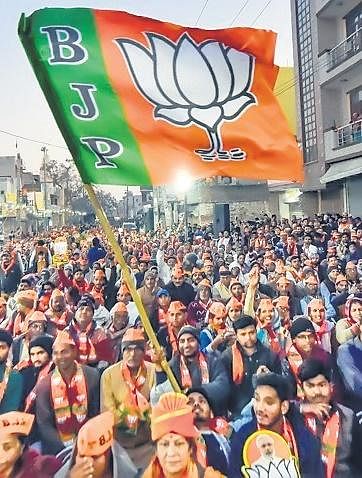 The rise of the party is unquestionably powered by the popularity of Brand Modi. Narendra Modi is verily the party, the leader and the face of the success story — it is no surprise that Sushil Modi has threatened to petition the Election Commission to prevent the LJP from using the face of the PM in its campaign. Under Narendra Modi, the BJP has repositioned itself to lay claim to the pole position as the party of natural governance.

This evolution of the party is spurring, in the upper echelons and ranks, the quest for Atmanirbhar BJP. There is no disputing the legitimacy of the aspiration of Atmanirbhar BJP. Equally, signals matter in politics — the BJP’s defeat in 2004 despite Vajpayee’s popular acceptance stemmed from mismanagement of alliances. How allies feel where it is dominant can infect domains where it is weak.

The macro question is whether the party has the presence and acceptance that this calls for in a large and diverse democracy such as India. It does well against the Congress, but still struggles when pitted against regional parties as witnessed recently in the 2019 polls for Odisha, Telangana and Andhra Pradesh. The party could not retain states it had a history in. It has found success by riding the Modi wave — and through acquisitions where it has been nimble while the Congress was flat-footed.

On the ground, electoral victories need validation of promise with performance. Governance in many of the states where the party is in power is not demonstrably better than others — even in adapting and adopting the ideas being propelled by the Centre. Despite the leverage of being in power in the Centre, the party is yet to produce a unicorn of the kind Gujarat came to be known under Modi.

As a party, it has much to work with and much to work on. A strong central leadership is necessary but not sufficient. The decimation of the Congress was caused by alienation of grassroots giants and promotion of bonsai leaders. The organisation needs to source talent at the state levels — it needs to find the new Parrikars and Mundes in states such as Tamil Nadu, Telangana, Andhra and Bengal to make the Mission Atmanirbhar happen.

On the political front, the party has consolidated its core constituency with articulation and action. It has expanded its appeal by presenting itself as the pro-poor party and wrenched the plank from the Congress without explicitly declaring itself as socialist. That said, the management of the economy leaves much to be desired and has left many disappointed, even disillusioned — small businesses, young professionals, the aspirational and the middle class.

Context is critical to tactics and strategy. The rising acceptance of the BJP is essentially wrapped in the popularity of Narendra Modi — his larger than life presence.  Public perception affords the party a window of opportunity for scripting its expansion with ideas to represent the pluralism of a competitive India. The quest for Atmanirbhar BJP calls for some Atmachintan on the road ahead.