The latest weekly report released by the Agriculture Department has categorised the fall armyworm infestation in the State as severe.

VIJAYAWADA: Farmers cultivating maize and jowar in the State during the Rabi season, who are already worried about lack of sufficient rains (38.7 per cent of deficient rainfall), now have another headache — fall armyworm. The latest weekly report released by the Agriculture Department has categorised the fall armyworm infestation in the State as severe.

During the Rabi season, farmers in Prakasam, Guntur, Kurnool, and parts of Anantapur, Kadapa, Chittoor, Krishna and north coastal districts of Srikakulam and Vizianagaram districts cultivate jowar and maize, as they are short-term crops compared to paddy, the principal crop of Kharif.

However, the exact extent of the infestation is yet to be calculated as the farmers take up cultivation of maize and jowar at different times in different regions. 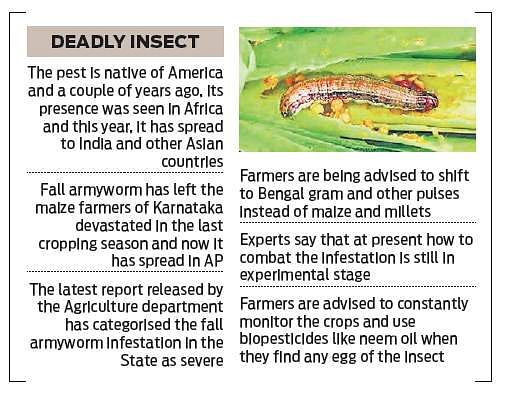 Now the farmers are being advised to shift to Bengal gram and other pulses instead of maize and millets, as the fall armyworms were witnessed more in maize and jowar.

In Rayalaseema districts, many farmers cultivated maize and jowar two months ago and when the crop should have reached flowering stage, they were left with plants without leaves.

“It just cuts away the leaves. We have never seen such a pest before. The devastation is simply too fast. We have used different pesticides, but in vain,” bemoaned Mabu, a farmer from Venkatapalli in Duvvur mandal of Kadapa district. He cultivated maize in three acres and left with no crop in hand now. “I don’t know what to do now. Just 20 days after sowing the crop, this new pest has infested my crop. Usually, I spend Rs 5,000 per acre and till now I spent Rs 13,000, with a bulk of it on pesticides. But at end of the day, I was left with no crop,” said Hussain of Pedda Bakapeta in Kadapa district.

The situation of farmers in Kurnool, Anantapur and parts of Chittoor districts is no different.
In Prakasam district, the farmers, who witnessed the fall armyworm infestation in the last phase of Kharif are now in a dilemma, whether to cultivate maize or not.

“Our district does not receive rains in time and we do not have enough water to irrigate our crops. In Rabi, we normally go for maize and now we don’t know what to cultivate,” said B Rama Rao, a farmer from J Panguluru in Prakasam district. He and some others in the village cultivate maize in 50 acres of land, but the same was lost.

Seeing the experience of the farmers, who went for an early crop, many others are contemplating to shift to Bengal gram. “Normally in Rabi, maize is cultivated in 15,000 hectares in Prakasam. Now  we expect it to slip to some 8,000 hectares,” said Srirama  Murthy, joint director of Agriculture department in Prakasam district.