On the other hand, copious inflows into Krishna river have resulted in significant increase in water level in the reservoir.

ELURU/KURNOOL/VIJAYAWADA: With incessant rains lashing the upper catchment areas, heavy inflows into Godavari river continue and 19 agency villages in Polavaram mandal remain cut-off from the rest of the world for the fourth consecutive day. 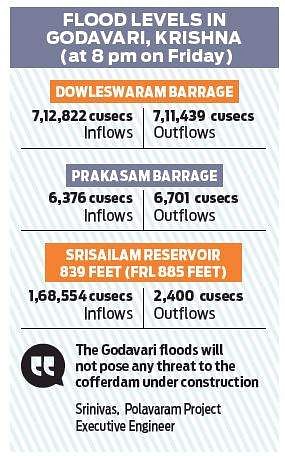 On the other hand, copious inflows into Krishna river have resulted in significant increase in water level in the reservoir.  The Indian Meteorological Department (IMD), Hyderabad, issued a heavy rain warning at isolated places in all coastal districts of Andhra Pradesh for the next 24 hours under the influence of the active low-pressure area in the Bay of Bengal.

As water level in Godavari increased considerably on Friday, irrigation officials diverted the floodwater through the spillway of Polavaram project. Polavaram Project Executive Engineer Balakrishna said that in the early hours of the day due to the intensity of the inflows into Godavari river (one lakh cusecs discharge rate), the temporary earthen bund constructed between 15th block and 48th block in the spillway got drowned and the water started flowing 4 feet above the spillway. Spill channel bunds downstream were breached to let the floodwater flow back into the river and ensure the safety of the spill channel. At Polavaram, the water level stood at 11.5 metres.

According to Central Water Commission Assistant Engineer Sarvanan, the water flow in the river is 7 lakh cusecs and with heavy rains continuing upstream, inflows at the rate of 7 lakh cusecs are expected to continue for another 24 hours.

Polavaram Project Executive Engineer Srinivas said that the Godavari floods would not pose any threat to the cofferdam under construction.

Dowleswaram Headwater Works Executive Engineer Krishnamurthy said that they released 6.5 lakh cusecs of water from the barrage and 10,000 cusecs into Godavari right and left canals.

Heavy rains in the agency areas of West Godavari and East Godavari districts resulted in flash floods as several rivulets are in spate. However, no loss of life or property has been reported so far. Devotees have been asked not visit Gubbala Mangamma temple in Buttaigudem till rains and floods recede. Copious inflows from Jalleru canal into Errakaluva reservoir increased the water level to 77.72 metres and once it touches 84.4 metres, its gates will be opened.

Heavy rains lashing Chhattisgarh and Odisha have resulted in copious inflows into Sileru river, which is emptying the floodwater in Godavari. With the increase in level, water is being released into Yeleru reservoir through Purushothapatnam Lift Irrigation Scheme. At present, the quantum of water in  Yeleru is 10.04 TMC and it is expected to increase further in the next couple of days.

The water level in Srisailam reservoir is increasing hour by hour and it stood at 839 feet on Friday evening against the Full Reservoir Level of 885 feet. The inflows into Srisailam are 1,68,554 cusecs at 8 pm. With the Telangana government lifting 2,400 cusecs of  water through Kalwakurthy lift irrigation scheme, farmer associations in Kurnool district demanded the release of water to Rayalaseema from the project through Muchumarri and HNSS. IMD forecast predicts light to moderate rains in several parts of Rayalaseema.

Now we are on Telegram too. Follow us for updates
TAGS
Godavari river Krishna water IMD Polavaram mandal