The boat was proceeding to famous picturesque Papikondalu or Papi Hills when the mishap took place.

RAJAMAHENDRAVARAM: Twelve people died and at least 25 others are missing after a tourist boat capsized in the river Godavari near Kachuluru Mandam village in  Devipatnam mandal, East Godavari district on Sunday afternoon. The tragedy occurred when the private boat, Royal Vasishta, was on its way to the scenic Papi Kondalu (hills) from Singanapalli near Gandi Pochamma temple in Devipatnam mandal around 1.45 p.m. There were at least 60 passengers aboard the ill-fated boat at the time of the accident.

There are conflicting reports on the number of passengers, missing and rescued. A release from the Chief Minister’s Office (CMO) said 27 passengers were rescued by locals, eight bodies were recovered and 25 others are missing. However, survivors told the media there could be up to 80 passengers including crew members on the boat. Unconfirmed reports suggested the number of missing could be 39.

There are also various versions on the exact cause of the accident. Survivors, several of whom were in shock having lost their loved ones, said the boat tilted to one side and sank into the river after several passengers rushed to the first floor from the deck. “About 20-25 people went up to the first floor as the boat tilted to one side. We jumped into the river and held on to the boat even as it overturned. Fortunately, some locals came in a boat soon and rescued us,” G Prabhakar, one of the survivors, told the media. He was part of a group of 14 tourists from Warangal. Only five of them survived. Earlier reports suggested the boat could have run into a whirlpool. 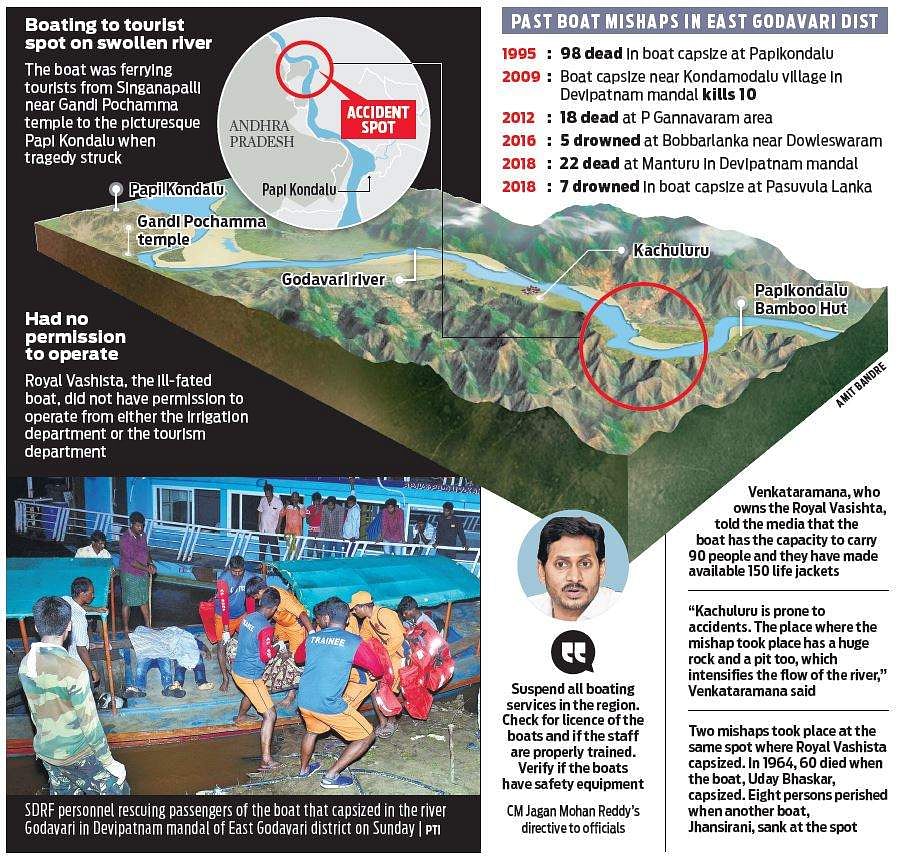 Another survivor said, “There were some cultural programmes being organised at that time. We were given life jackets. Due to sweat, we took them off. And lunch also was about to be served, so we thought we could wear the life jackets after lunch.”

The current at the particular spot is very strong and Godavari has been rough these past few weeks following heavy inflows.

Chief Minister Jagan Mohan Reddy expressed shock over the tragedy and announced an ex gratia of Rs 10 lakh each to the bereaved families. Most of the passengers were from Hyderabad (22), Warangal (14), Visakhapatnam (9), and Rajahmundry. The boat, operated by one Venkataramana based in Vizag in partnership with one Subbarao in Rajahmundry, has no permission from the tourism department or the irrigation department to organise the tour. Tourism Minister Avanti Srinivasa Rao and AP Tourism Development Corporation (APTDC) divisional manager Prakash confirmed the same.

As news broke about the incident, two tourism department boats -- Haritha and Sir Arthur Cotton -- were rushed for rescue operations from Singanapalli in coordination with the NDRF and SDRF. Two more speed boats were transported in lorries by road from Rajahmundry, East Godavari District Collector D Muralidhar Reddy said.

As the accident site is in an interior place where phones do not work, police and revenue officials were able to get information only an hour after the tragedy. As the news trickled in, Chief Minister YS Jagan Mohan Reddy called up the district administration and directed them to speed up rescue operations and rush NDRF and SDRF teams to the place and also engage the services of ONGC and Navy helicopters, if needed.

Directing all available ministers in the district to rush to the spot and supervise the rescue work, Jagan asked the officials to suspend all boating services in the region immediately. “Check for licence of the boats and if adequate training was given to the staff or not. Verify if the boats have safety equipment,’’ Jagan instructed the officials and asked them to submit a report on the incident and to release safety guidelines prepared by an expert committee.

Venkataramana, who owns the Royal Vashishta, told the media that the boat has the capacity to carry 90 people and they have made available 150 life jackets. “Katchuluru is prone to accidents. The place where the mishap took place has a huge rock and a pit too which intensifies the flow of the river. Drivers should be extra alert while passing through this particular stretch,’’ he said.

He, however, did not respond when asked if the boat has the permission and licence to operate. Both drivers of the boat, Nukaraju and Tamaraju, were among the dead.

By evening, six fire teams from the twin Godavari districts with eight boats and two teams, one each from the NDRF and SDRF,  are engaged in rescue and search operations. Two more teams will be joining them tonight. One deep divers team from the Indian Navy has also reached the spot. One ONGC chopper was used to help in the operations. A specialised deep divers team with side scan sonar equipment will arrive from Uttarakhand on Monday. At the time of going to press, the search operations are still on. Home Minister Sucharitha said the operations will continue throughout the night. The Indian Navy will also be despatching two helicopters from INS Dega at the break of dawn Monday.

Agriculture minister K Kanna Babu said that the boat got caught in a whirlpool and capsized. He said all efforts are on to rescue the tourists and crew members and NDRF and SDRF teams and helicopter of ONGC is being pressed to take up rescue operations.

Prime Minister Narendra Modi, Telangana Chief Minister K Chandrasekhar Rao, President Ramnath Kovind and others expressed grief and conveyed their condolences to the bereaved families. Chandrasekhar Rao announced an ex gratia of `5 lakh each to the families of the deceased from Telangana. KCR directed Transport Minister Puvvada Ajay to help in relief measures and asked minister Errabelli Dayakar Rao and MLA Aruri Ramesh to rush to the spot, and stand by the families of the victims.