Godavari boat mishap: 'Royal Vashista' did not have permission to operate

Royal Vashista, the launch which capsized in the river Godavari at Kachuluru of Devitpatnam mandal in East Godavari district did not have permission to operate.

RAJAMAHENDRAVARAM: Royal Vashista, the launch which capsized in the river Godavari at Kachuluru of Devitpatnam mandal in East Godavari district did not have permission to operate. Neither the irrigation department, which monitors the movement of any vessel in the river, nor the tourism department gave permission to the launch to ferry tourists from Gandi Pochamma temple in Devipatnam to Papi Kondalu, the tourist resort located upstream of the river.

“We have not given any permission to any vessel, including fishing boats, to operate in the river. For the past one month, operation of all boats have been banned, given the high intensity of water flow on the upper and lower area of the river,”  S Krishna Rao, Superintendent Engineer of Dowaleswaram Barrage in Rajamahendravaram, told TNIE. 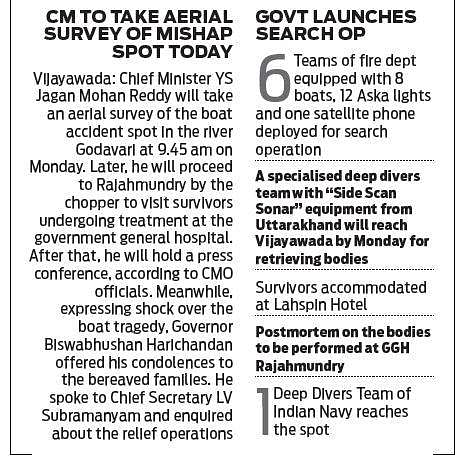 Minister for Tourism Muttamsetti Srinivas Rao also confirmed that there was no permission from the department for the operation of any boat in the Godavari in view of heavy floods for the past one month.
Minister for Home and Disaster Management Mekathoti Sucharita said that someone in the Ports department might have given permission for the operation of Royal Vasishta.

“We have ordered an inquiry into it and stern action will be taken against those responsible,” she said.
Royal Vashista was owned by one K Venkataramana, who is reported to be from Visakhapatnam. He claimed that the boat had a capacity to carry 90 persons and it was equipped with 150 life jackets. He said the two drivers, Nukaraju and Tamaraju, who perished in the mishap, were well trained to operate the boat.

“They might have accidentally steered the launch towards the accident-prone area in the river near Kachuluru. Two boats capsized near the same spot in the past,” he said.  However, when asked if he had permission for operating the boat, Venkataramana did not answer.