Though it has been six days since the accident happened, relentless efforts have been continuing to trace the missing persons and fish out the boat from the riverbed.

VIJAYAWADA/KAKINADA: In spite of odds, NDRF and SDRF teams with help from the Indian Navy, are making every effort to retrieve the tourist boat - Royal Vasishta - which capsized in the River Godavari on September 15. As many as 36 people died and 13 are still missing, while 26 survived the mishap.

On Saturday, another body was traced near Kachuluru, taking the toll to 36 in the accident. It was that of a five-year-old girl, whose identity is yet to be established. Though it has been six days since the accident happened, relentless efforts have been continuing to trace the missing persons and fish out the boat from the riverbed.

“Everyday our men are searching from the accident spot at Kachuluru up to the point where the river joins the sea,” Kuldeep Singh, assistant commandant of NDRF teams, told TNIE. 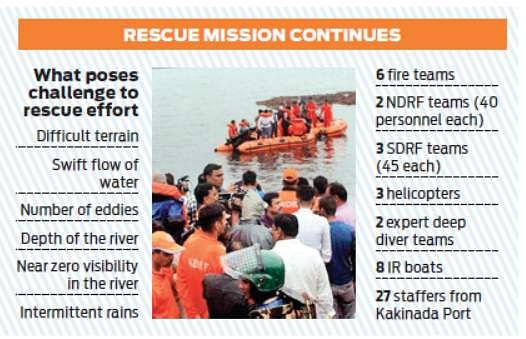 A total of 727 rescuers, including two NDRF teams comprising 40 personnel each, who are expert swimmers and trackers, three SDRF teams of 45 personnel each, 80 fire service personnel, three hundred policemen, 50 revenue employees along with staff from Kakinada Port and fishermen are striving day and night to fish out the vessel and retrieve the bodies that are suspected to have been trapped in the ill-fated boat.

“Using side-scan sonar, we have echo-located the boat at an approximate depth of 210 feet. Physically locating the vessel at that depth is near impossible, given that best of our deep divers or those from the Indian Navy, can go only up to a maximum 60-70 feet in the conditions that are unfavourable,” explained Singh.

According to Adinarayana, Speical Officer from Bhavanapadu Port in Srikakulam district, who served as port officer of Kakinada and deputed by the State government to render required assistance and inputs for the search and rescue operation, the visibility in the river at such a depth is very poor.

He said as one goes deeper, the visibility becomes near zero given the murky nature of the water.

Further, the location of the accident spot is also posing a challenge to the rescue and search teams. The river gets narrower and water flows swiftly as it passes through hillocks. There is a curve in the river upstream of the accident spot and variable speed of the flow of the water results in eddies.

“Given the rapid flow of water and a few eddies near the accident spot, retrieving the boat from a depth of more than 200 feet is very tricky. However, experts from different departments are making every effort to fish out the vessel at the earliest,” the NDRF assistant commandant said.

Two experts from the Mumbai-based Marine Masters company, which is involved in salvage operations, have also been roped in. They visited the spot two days ago.

A report from them on how to proceed further in fishing out the boat is expected shortly.

Already Kakinada Port Trust has moved equipment like anchors and iron link chains for retrieving the boat. However, heavy flow of water in the river, fluctuating between 2.97 lakh to 3 lakh cusecs, for the past five days is hampering the efforts.

P Satyam, an expert, came to the accident spot to lend a helping hand. All the personnel involved in rescue have made Devipatnam as their base of operations.  It is expected that it might take another 3-4 days to fish out the 25-tonne boat.