As part of the evidence collection in connection with the Sreejith’s alleged custodial death, the SHRC on Thursday examined the documents with the Varapuzha police station. SHRC acting chairperson P Mohanadas conducted the inquiry proceedings.

“It is evident from the medical certificate issued by the medical officer of the Government Hospital, North Paravur, that Sreejith had not been injured or tortured when he was produced for medical examination after the police took him into custody on Friday,” said the KSHRC statement. “However, Sreejith was later admitted at Aster Medcity in a serious condition. He had been in police custody during the time and the cops had brought him to the hospital. Hence, it is clear Sreejith sustained the injuries while in police custody. The SIT should identify the police officers who assaulted him,” said the statement.The KSHRC also said Sreejith was not involved in the house attack of Vasudevan, who later committed suicide. There was also a statement of a witness saying the cops assaulted Sreejith.

Guilty will be punished, says CM 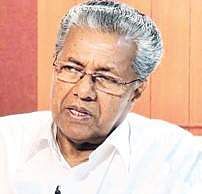 Kanhangad: The government will make no effort to protect those guilty in the custodial death of Sreejith in Ernakulam, said Chief Minister Pinarayi Vijayan. “The government will take strict action against those found guilty. The government has no other face. Those who know the LDF Government know it,” he said. The Chief Minister was speaking after inaugurating the P Krishna Pillai Memorial built by the CPM near Belikoth in Kanhangad on Thursday. Vijayan said a team led by an ADGP has been constituted to investigate the alleged custodial death.  “The investigation has started and the team will probe all aspects of the case and the guilty will be brought to justice,” he said.

Chennithala demands judicial probe
Kochi: Opposition leader Ramesh Chennithala has demanded a judicial inquiry into the alleged custodial death of Sreejith, a native of Devaswompadam in Varapuzha. “The state government has not taken any action against the Varapuzha SI, against whom allegations have been levelled from various corners. The officers involved in the incident should be removed from service,” he told reporters after visiting Sreejith’s residence at Varapuzha on Thursday. “The police officers have violated all guidelines in Sreejith’s arrest. Sreejith and his brother were subjected to brutal torture inside the lockup. This is the sixth custodial death after Chief Minister Pinarayi Vijayan assumed the office. The lockups in the state are turning deathbeds. However, the Chief Minister is keeping mum on the issue,” Chennithala said.

State-sponsored murder: BJP
Chengannur: BJP national executive committee member P K Krishnadas has said the police arrested Sreejith, of Varappuzha, on the basis of the diktat by CPM local leaders, including district secretary P Rajeev. He said the custodial death of Sreejith was a result of the CPM intervention. “At present, the police are trying to put the blame on Sreejith in the name of trespassing. They had fabricated documents and threatened the witnesses in the case. It was a government-sponsored murder,” he said. He said the BJP would hold a day-long fast in front of the Ernakulam range IG office.

Stay up to date on all the latest Kerala news with The New Indian Express App. Download now
TAGS
Human Rights Commission Sreejith