A news channel aired visuals in which the Congress MP was seen allegedly demanding Rs 5 crore from two persons at his house.

KOZHIKODE: The LDF district committee has sought action against Kozhikode MP and UDF candidate MK Raghavan in the wake of a news channel airing a video in which he is seen negotiating a bribe. CPM leader Elamaram Kareem told journalists: “Raghavan must resign from the LS and face investigation. He doesn’t deserve to be in the post. The Congress should withdraw his candidature. 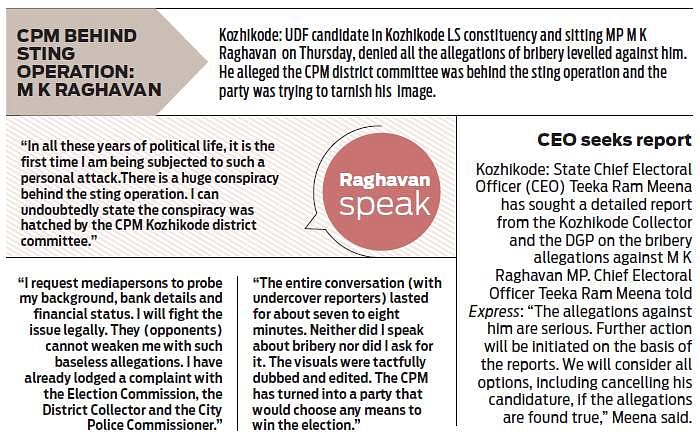 The visuals aired by a private television channel on Wednesday,  showed Raghavan discussing the expenditure for elections with undercover reporters who approached him seeking his help to buy 15 acres of land in Kozhikode for a ‘client’ to set up a five-star hotel.

Kareem also brushed aside Raghavan’s statements the CPM district committee was behind the sting operation. “There is no need for the CPM to play such a dirty game. If anyone proves the involvement of any party man, he will be ousted from the party immediately,” he said.