These systems are expected to merge and move towards Nagapattinam coast in Tamil Nadu by Sunday.

KOCHI: Two sets of depression in the Indian Ocean have triggered gusty winds and turned the sea rough, forcing the Kerala Fisheries Department to issue an alert advising fishing boats to return to the coast by Friday evening.

A low-pressure region, tentatively named Fani, is developing off Sri Lanka’s southeastern coast while a moderate tropical storm Lorna is centred over open seas about 900 miles southeast of Diego Garcia. These systems are expected to merge and move towards Nagapattinam coast in Tamil Nadu by Sunday. However, Fani’s location has caused concern among the Fisheries authorities in the state as it is the same region where Cyclone Ockhi had developed. Ockhi deviated to the western coast unexpectedly and unleashed devastation along the Kerala coast on November 30, 2017.

“We’ve started making an announcement using loudspeakers in the coastal belt cautioning fishermen against venturing into the sea. All fishers who’ve set off for fishing are being alerted to return to the coast by Friday evening. We’re also using Reliance Foundation’s voice message system to reach the fishing boats that have ventured for deep-sea fishing. The Coast Guard is also trying to alert deep-sea fishers,” Fisheries Deputy Director S Mahesh told Express.

Choppy seas to prevail along the Kerala coast

High waves have been battering the coastal belt of south and Central Kerala from Wednesday, causing damages to a few houses in Thiruvananthapuram district.According to the Indian Meteorological Department, the low-pressure area is likely to intensify into a depression during the next 24 hours over east Equatorial Indian Ocean and adjoining central parts of south Bay of Bengal.

“It’s very likely to intensify into a Cyclonic Storm during the subsequent 24 hours. It’s expected to move northwestwards along and off the Sri Lankan coast during the subsequent 72 hours and reach near north Tamil Nadu coast by April 30,” said the IMD in an alert issued on Thursday. Fairly widespread rainfall with isolated heavy falls and squally winds are likely over Kerala.

Gale winds, speed reaching 90-100 kmph, are likely over Southwest Bay of Bengal and off Tamil Nadu coasts. This could result in very rough sea condition over south Bay of Bengal, said the IMD.The Indian National Centre for Ocean Information Services has forecast rough sea conditions along the Kerala coast due to the swell waves, having 1.5-2.4 m height. Wind speed may touch 50 kmph over Kerala from Sunday morning and could increase to 60 kmph from Monday morning, said the forecast. 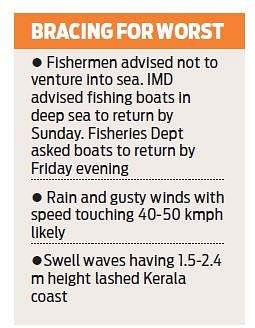 “There’re three sets of depression in the Indian Ocean, two of which below the equatorial region. As per predictions, there’re chances of the three systems merging into one and reaching the Nagapattinam coast by Sunday. It’s impossible to predict the path of the cyclone, but it’s expected to move up the Bay of Bengal,” said Central Marine Fisheries Research Institute principal scientist K Sunil Mohamed.

According to meteorologists at Acuweather, a moderate tropical storm Lorna is centred over open seas about 900 miles east-southeast of Diego Garcia. It will strengthen over the next three days. Another weak tropical low is centred a few hundred miles east of Lorna. The low should eventually be drawn into the larger circulation of Lorna by the weekend.

A tropical low is developing in the northern Indian Ocean to the west of northern Sumatra. This low is likely to strengthen and could develop into a tropical cyclone late in the week or weekend.A track to the northwest may eventually threaten areas from Sri Lanka to the east coast of India, said the alert.

Now we are on Telegram too. Follow us for updates
TAGS
Kerala Fisheries Department Fani Cyclone Fani Lorna