Her stellar role in the rescue of 46 women Malayalee nurses held captive by ISIS insurgents in Iraq after intense diplomatic efforts in July 2014, is still fresh in the minds of people.

THIRUVANANTHAPURAM: There have been many instances when Sushma Swaraj personally intervened to save the lives of people facing trouble outside the country. But in Kerala, her stellar role in the rescue of 46 women Malayalee nurses held captive by ISIS insurgents in Iraq after intense diplomatic efforts in July 2014, is still fresh in the minds of people.

According to the then spokesperson of the Ministry of External Affairs, the Minister, who was on her way to Bhopal, cancelled her visit midway to return to Delhi and led the diplomatic efforts to rescue the nurses. Besides being in touch with her counterparts in all major Gulf countries, she also opened informal channels to reach out to ISIS and other warring groups in Iraq. Her efforts were lauded by the then Kerala Chief Minister Oommen Chandy, who was camping in New Delhi at the time of crisis.Filmmaker Mahesh Narayanan made a movie ‘Take Off’ to narrate the diplomatic victory and the evacuation of nurses. 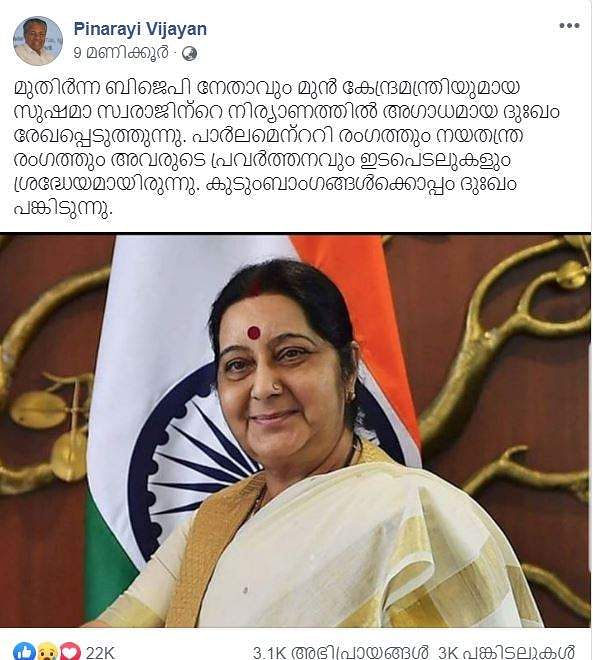 “Our friendship started when Sushma Swaraj and I were ministers of housing at Haryana and Kerala respectively in 1977. She had heard about the Chengalchoola housing project during its first phase and visited the state to see the model project,” said Chandy. Minister of State for External Affairs V Muraleedharan said he lost a sister who was always accessible whenever he visited Delhi.“When I became a minister, she was happy and gave advice. She had told me I could approach her for any doubts in the department,” said Muraleedharan.