2018 Kerala Floods: A journey through death and devastation

A year after the devastating flood, the victims are yet to recover from the mental trauma.

KOCHI: Exactly one year after the torrential rain of August 2018, Kerala witnessed another spell of heavy rain which drenched the state and triggered massive landslides, bringing afresh memories of the trail of death and devastation unleashed last year.The mind was bubbling over with enthusiasm as we set off for Cheruthoni in Idukki district on August 9, 2018, to witness the opening of the flood gates of the biggest reservoir in the state, after 26 years.

But what we witnessed were swelling rivers, crumbling houses, boulders rolling down hills and the scramble to save lives and belongings. Heavy rains had been pounding the state right from the onset of monsoon and the water-level in Idukki dam had touched 2,392 feet by July 30, forcing the government to consider opening flood gates. 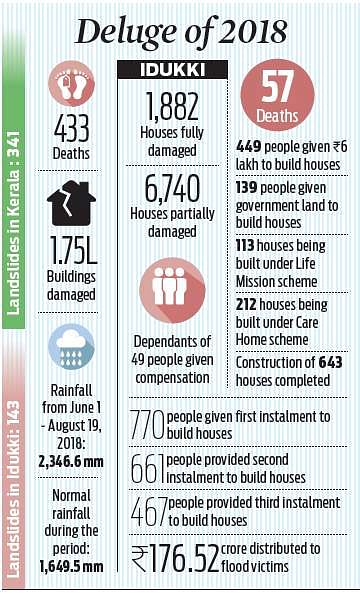 As water-level crossed 2,400 feet, on August 9, the government gave the go ahead to open the shutters. There was excitement in the air. However, the mood soon changed to anxiety as we traversed through the Ghat Road from Neriamangalam to Munnar. The road looked deserted with drivers refusing to drive through the terrain ravaged by a series of landslides. The police and Forest personnel were struggling to remove debris and restore traffic.

Anxiety gave way to shock as we reached Adimali, where a family of five were crushed to death by a massive landslide, early morning. The family of Hassankutty, 70, had gone to bed at 1 am. Around 2.50 am, huge boulders and tonnes of mud came crashing down on the house. In a fraction of a second, there was no trace of Puthenkunnel house. All, except Hassankutty and Sainudeen, a relative, were dead. A year on, Hassankutty, who suffered multiple fractures on his left leg, is still recuperating at Adimali Government Hospital.

The road to Cheruthoni from Adimali was treacherous. With rain pounding the hills for days together, the narrow stretch had turned slippery. Landslides had wiped away huge tracts of road. Boulders, muck and trees left behind made driving dangerous. The threat of a landslide was looming large.

A visit to Karinkulam near Murikassery, where a massive landslide had swept away a family of three the previous night, revealed the scale of devastation. Two people were buried alive while the mutilated body of their mother was recovered downstream. Residents of the entire locality had shifted to a relief camp fearing more landslides.

An air of anxiety, distress and panic prevailed at Cheruthoni, a dusty town located just below the flood gates of Idukki dam. As the dam shutters were opened only twice after its construction in 1976, the Cheruthoni river bed was encroached by locals. The first shutter opened on August 9, while all floodgates were lifted to a height of one metre by August 10.

A crowd had gathered at Cheruthoni even before daybreak to witness the opening of shutters. By noon, people living on the river’s banks were scrambling to save their belongings and shift to relief camps. By 5 pm, around 10,000 people had landed in relief camps.

The fury of the flood was on display as the raging river ravaged the banks, razed houses, eroded roads and swept away vegetation. All low-lying areas were inundated and Cheruthoni was facing devastation. As we returned to Kochi, families staying on the banks of Periyar in downstream areas of Neriamangalam, Perumbavoor and Aluva were fleeing from flooded houses. Kerala was waking up to the worst flood in a century.