With the Sabarimala issue triggering a political polarisation in the state, the BJP is expecting a huge shift in vote share.

THRISSUR: Considered a constituency of changing loyalties, Thrissur has witnessed the fall of many political heavyweights. Among the vanquished stalwarts are Congress leaders K Karunakaran, K Muraleedharan and CPI leader V V Raghavan. With the Sabarimala issue triggering a political polarisation in the state, the BJP is expecting a huge shift in vote share. As a constituency where the Church holds sway, the stance of the Christian and Ezhava communities will be crucial. 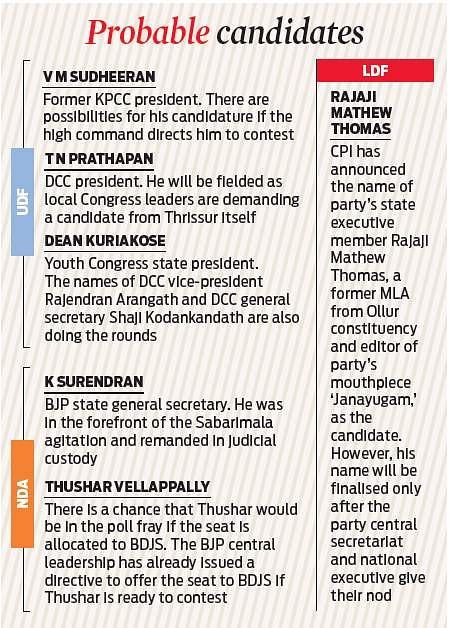 In the 1998 mid-term poll he asserted his dominance trouncing Karunakaran’s son K Muraleedharan. According to LDF leaders, the front has increased its vote share by over 1.5 lakh in the seven constituencies in last Assembly polls. In the local bodies also the LDF has a clear upper hand.

Considering the change in voting pattern, the Congress is searching for a candidate who can influence voters across party lines. The Congress and the BJP hope that the devotees hurt by the Sabarimala imbroglio will scuttle the ruling front’s expectations.

Karunakaran family’s descend
Though Thrissur is known as a bastion of Congress leader K Karunakaran, the constituency witnessed the poll debacle of both Karunakaran and his son K Muraleedharan against CPI’s V V Raghavan. In a fight virtually called David versus Goliath, Raghavan defeated

Karunakaran by a margin of 1,480 votes and emerged a dark horse in 1996. Interestingly, in the next election in 1998, K Muraleedharan tasted failure by a margin of 18,409 votes. However, just a year after, in 1999, A C Jose of the Congress wrested the seat from the LDF. The Karunakaran family’s fall was total with the last Assembly polls held in 2016 when Padmaja Venugopal, Karunakaran’s daughter, was defeated by CPI leader V S Sunilkumar in Thrissur constituency by a margin of 6,987 votes.

A swapped loss for Dhanapalan
It was the exchange of seats between Thrissur MP P C Chacko and Chalakudy MP K P Dhanapalan that cost the Congress dear in 2014. This led to confusion among the party rank and file resulting in both the candidates biting the dust.