Not protesting for communism, but to prevent death of research, says academic who resigned over CUK's research subject restriction

Dr Meena T Pillai, a member of the Central University of Kerala's Board of Studies resigned a few days back, protesting the circular that asked the students to work on subjects of national priority.

A Central University introduces a new circular, that creates a lot of hue and cry among the student community and the public. The administration and academia are visibly silent and unshaken with the former issuing a few rejoinders justifying their stand. In the midst of all this, a member of the university's board of studies resigns, protesting the norms stated in the circular. But did it prompt any reaction? Not at all. And hence, Dr Meena T Pillai, the former Board of Studies member of the Central University of Kerala, believes that her resignation is clearly insignificant.

On March 13, the Central University of Kerala issued a circular, directing research students to choose topics that are in accordance with 'national priorities'. It instructed the faculty to prepare a 'shelf of projects' for the students to choose from, in order to 'discourage research in irrelevant subjects'. Following the same, Pillai resigned from the post on March 21. "My resignation was insignificant. It was just a gesture of protest.," she says.

The Director of the Centre for Cultural Studies, University of Kerala, Pillai questions who make decisions on national priority. "The circular permits research only on subjects relating to national priority. But who decides them? Do our regional, vernacular, local, ethnic subjects and issues related to Dalits, tribals and marginal groups fit in national priority?" she asks. "Research of a certain kind has become the mandate of the hegemonic structure of this university," she adds. She also says that it is against the spirit of renaissance and democracy.

When the issue was debated on social media, a student wondered if her research on 'comics in Malayalam' would get approval. Pillai replied to the student that it would be doubtful in a scenario where even the 2018 Kerala floods were not considered as a matter of national priority. She tells us, "A few months ago, we were fighting a huge battle and were asking for help. But we all know what happened. This fixing of national priority by a set of people is extremely problematic." She worries about a day where the country prioritises the market's and corporates' interest. She also talks about the NCERT's decision on removing chapters on Kerala's caste struggle. "For them, that isn't important. But for us, it is history and it defines us," she says.

Pillai sees the circular as an attempt to cow down the young generation of researchers from asking questions. "Today, you become an anti-national the moment you question something. To dissent or ask questions become impossible in this situation. Young students must be able to question. How else will the country progress? Or are we underestimating the students?" she asks. She also thinks that by restricting a researcher's idea, imagination and sense of critique, the administration is attempting to hatch out a generation that will hear out to them.

Of all the central universities in the country, this circular was introduced only in CUK. This peculiarity makes Pillai wonder if this was the government's 'test dose' to see the reaction to this norm, before introducing it in other institutes. At the same time, the response from the academics is worrisome for her. "Within the academic community, everyone is used to a very cushiony kind of job and we're all aspiring for positions. In a certain sense, the silence is alarming. But the widespread protest from the public is very heartening," she says. 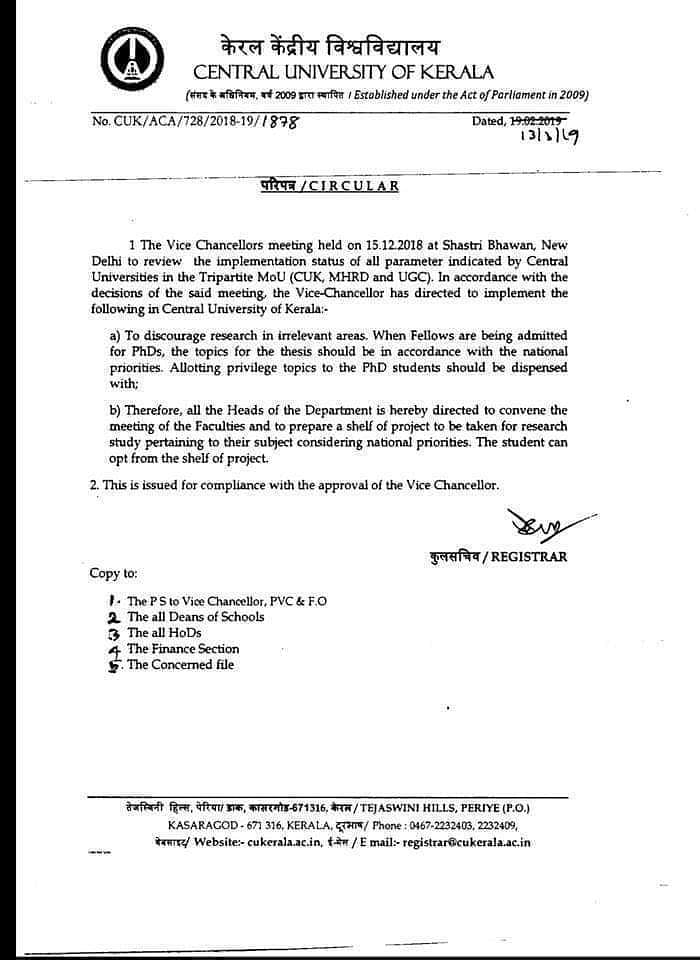 She says that a lot of faculty members from CUK are upset over her resignation. "Many of them have been asking me to come back because they say that they have now lost the voice to protest. I could understand. They are so cowed down by fear and they can't even comment. Everyone is so frightened," she says.

Following the protests, the university had come up with a rejoinder, justifying their point saying that they wanted the students to research on subjects that are socially relevant. But Pillai isn't convinced and challenges it with a valid argument. "There is  a huge difference between 'social relevance' and 'national priority'. If they want to come up with multiple interpretations, they might as well withdraw the circular," she says. The rejoinder to the circular also quotes a speech by Pinarayi Vijayan, the Kerala Chief Minister. But recently, Vijayan had put up a Facebook status, saying that his words were bent to suit the university's interests. "I'd said that there must be research that will help the society. I wanted to research on varied subjects. Flexing my words to suit the central government's interest in research on 'national subjects' is highly worrisome [sic]," he wrote.

Pillai concludes saying that her struggle isn't politically motivated, but is to revive quality research in the country. "In my class, there are students with different viewpoints. I'm protesting for my students, not for communism or against saffronisation. Research shouldn't be silenced," she says.

(This story originally appeared on edexlive.com)