Vices of Malayalis keep Kerala afloat through its excruciating debts

Kerala is neck-deep in debt, yet the state is doing literally nothing to explore new revenue sources.

Kerala is neck-deep in debt, yet the state is doing literally nothing to explore new revenue sources. Successive finance ministers have been milking the state’s two vices -- selling dreams through lottery tickets and heavily taxing alcohol -- to boost the state’s drying coffers. Is there a way out for the state government from the mess it is enmeshed in? Chances appear slim, finds Express

KOCHI: Kerala’s is an interesting, if not curious, economy.  The cash-strapped state -- it has a debt ratio of over 30 per cent -- the highest and most deteriorating debt among all states since 2013 -- is keeping its finances alive through the vices of its people - heavy alcohol consumption and penchant for lottery tickets. 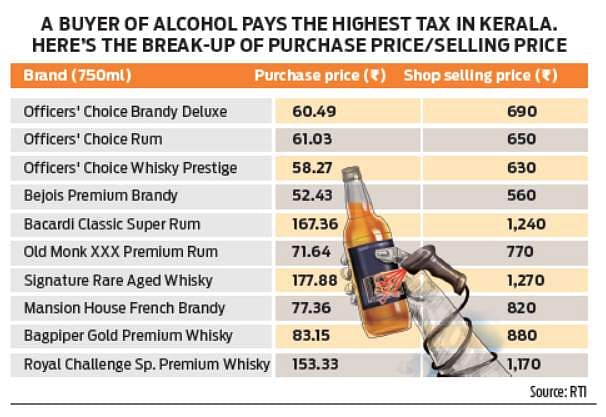 As per the latest data, the income from the lottery for 2017-18 stands at Rs 9,034.16 crore while the revenue from liquor sales (state excise + sales tax) stood at Rs 12,937.09 crore in the same period. Add to this is the bumper sales during festivals like Onam. In the pre-Onam week alone, Bevco sold a whopping Rs 487 crore worth liquor while the lottery tickets offer eye-popping prize money of Rs 16 crore.

“The entire approach of the state government is flawed and regressive. To manage its coffers, Kerala Government is not only punishing the poorest but it is also encouraging them to buy an addictive product like lottery by selling dreams,” said Jose Sebastian, who teaches at the Gulati Institute of Finance and Taxation.

“It’s no secret who’s consuming most liquor and who’s buying the lottery tickets. It’s mostly the poorest sections of society. Gujarat neither sells liquor or lottery, yet it is the top-performing state in the country,” he said.

According to a study by Sebastian, Kerala has a wide tax base covering various sections of people and different kinds of economic activities. This is not reflected in the revenue collection. “Virtually, the effective revenue base has been getting narrowed down to four items -- petroleum and petrol products, liquor of all kinds, motor vehicles and lottery,” he said.

“An unintended consequence of the evolution of Kerala’s revenue structure is that it places a disproportionately high burden on the poor and marginalised sections of society. They are the major consumers of liquor and lottery. The share of these two in SOR increased from 14.77 per cent in 1970-71 to 34.46 per cent in 2016-17. Motor vehicles like three-wheelers, pickup vans and taxis powered by petroleum products are the source of livelihood for many of this class,” he said.

V K Vijayakumar, chief investment strategist, Geojit Financial Services, said the LDF Government and its Finance Minister T M Thomas Isaac have been adopting a policy of borrowing and continued borrowing to meet the day-to-day needs. “Hard decisions such as hiking education fees, concessions for students travel or the property tax, which have not been touched for several decades, are not taken as it will backfire politically,” he said.

Vijayakumar pointed out that property tax has not been hiked since 1995 while students continue to travel at nominal rates though they have no qualms in spending thousands on mobile bills or on autos/share cabs every month.

Another big consumption by the state is gold, but it now comes under the Goods and Services Tax. Recently, the Finance Minister lamented that the state government gets less than Rs 200 crore as tax from gold sales while under the scrapped Value Added Tax (VAT) regime it used to fetch Rs 750 crore. Kerala is the top consumer of the yellow metal and Isaac blamed lack of preparedness and absence of invoices for the ‘huge leakages’ in GST revenue. Economist K V Joseph pointed out that the tuition fees in government medical colleges are as low as Rs 25,000 while in private colleges it is Rs 5.5-6.5 lakh yearly.

“While lower-income bracket people and SC/ST category can be exempted from higher fees, the government should look at hiking fees for those from higher-income families,” he said. Joseph advocated similar hike in taxes from forestry and land/property registration and taxes.

Geojit’s Vijayakumar blamed the state government for spending recklessly when the state coffers are drying up. “The state’s debt is Rs 1.5 lakh crore. When the state is in deep debt, the government has spent Rs 5.90 crore on politically accommodating VS Achuthanandan in Kerala Administrative Reforms Commission. Our Public Service Commission has 21 members while Madhya Pradesh PSC has just four members and Gujarat seven. All these members are paid over Rs 1.5 lakh per month. The government would do well to cut its unnecessary expenditure first when the state is in deep financial crisis,” he said.

Will Finance Minister Isaac think out of the box to find new revenue models? Will he bite the bullet? No chance when the state is heading for an election season -- the byelections followed by the local body polls in 2020, and the Assembly polls in 2021.

Another addictive habit of Malayalees is joining money-saving scheme or chits or chitties, which combine the advantages of both investment and advance. No wonder, while most Kerala PSUs are loss-making or white elephants, the Kerala State Financial Enterprises or KSFE, which runs chitties of several sizes, is flourishing. Compared to unofficial chits run by individuals, which are illegal, the KSFE chits are risk-free safe haven for the public as the institution conducts only chitties fully governed by provisions of the Central Chit Fund Act 1982.

The instalment per month for chitties range from Rs 1,000 to Rs 5,00,000 and the usual duration of chitties is 30 months, 40 months, 50 months, 60 months and 100 months. The total of the periodic subscription, called the chitty amount, will be given out as ‘prize money’ to the person who bids by allowing for the maximum reduction in the prize money.

The maximum reduction possible is 25 per cent as per the prevailing Chitty Act and if there is more than one subscriber interested in bidding at 25 per cent reduction, the numbers of such bidders will be entered in a draw of lots. Thus each subscriber gets an opportunity to receive the prize money once during the tenure of the chitty. All the promoters have to contribute the periodic subscription till the end of the chitty.  Though the KSFE opened a new provision for the NRIs to join the chitty through ‘Pravasi Chitty, it has not taken off.

Now we are on Telegram too. Follow us for updates
TAGS
Kerala debts Lottery alcohol