KOCHI: On Sunday, Goa Health Minister Vishwajit Rane took to Twitter to thank his Kerala counterpart KK Shailaja. "I extend my gratitude to (Smt.) @shailajateacher (Madam, Hon) Health Minister of Kerala for helping us with the movement of 20,000 litres of liquid oxygen for COVID patients in the state of Goa. The people of Goa are grateful for your contribution to our fight against #COVID19," he tweeted.

While Kerala's oxygen production is getting recognised, thanks to its surplus medical oxygen in its possession, the success was not achieved overnight.

"Kerala is the only state which currently has surplus oxygen. One reason for this could be that the PESO (Petroleum and Explosive Safety Organisation) and state health department have been able to calculate the oxygen requirement of each patient and ensure optimal supply whereas this process has been not very rigorous in other states. PESO, Kerala initiated the oxygen monitoring since March 23 last year along with oxygen manufacturing plants and filling plants," said R Venugopal, deputy chief controller of explosives, PESO, nodal officer (medical oxygen monitoring) , Kerala & Lakshwadeep.

Venugopal said though Inox has a capacity of 149 tonnes/day, the actual production is 147 tonnes/day.  It supplies liquid oxygen to hospitals in Kerala, Karnataka, and Tamil Nadu.

Chandrabose J, managing director of KMML, said the company can produce 70 tonnes per day (tpd) of oxygen. Out of this, only 10% is medical-grade oxygen. "For industrial oxygen, 99.5% purity is enough. For medical oxygen, we need purity of 99.999%," he said.

According to Chandrabose, the Kerala PSU has supplied 900 tonnes of medical oxygen in the last six months. This means, 150 tonnes/month since October. He said though the company can produce 210 tonnes per month of medical oxygen, 15% goes due to an outage. "Even a minor disruption in power supply will affect the production," he said.

On Monday, BPCL supplied around 1.5 tonnes per day of medical oxygen to Government Hospitals In Ernakulam district from its Kochi refinery.

PESO's Venugopal said Kerala can increase its capacity of medical oxygen production if there's more demand. "Presently, all filling plants are not running at 100% capacity. if demand is there, we can go for 100% capacity," he said. Besides, one ASU plant commissioned at Palakkad is about to operate in a month which can produce 4 tonnes of medical oxygen per day, he said.

On Wednesday, Cochin Shipyard said it helped set up Centralised Oxygen Distribution Facilities at five Government Hospitals in Kerala. "CSL felt it essential to support the augmentation of facilities to provide oxygen support at hospitals in the current scenario. We are committed to supporting the cause and we surely hope that this will come in handy during emergencies" said Madhu S Nair, its CMD. 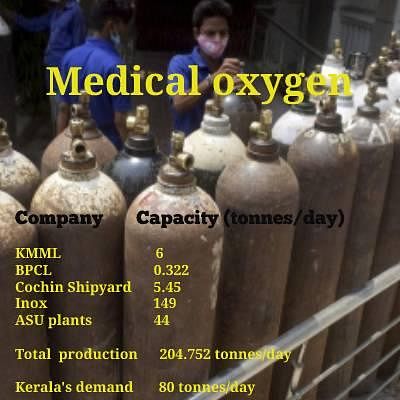 Now we are on Telegram too. Follow us for updates
TAGS
Kerala Kerala Covid cases medical oxygen KK Shailaja