Without revealing details of the report, Atulya Misra told Express that lapses were found at all levels from trekking groups to field officers to people who operate tourism bungalows.

CHENNAI: Exactly four months after the tragic Kurangani forest fire that claimed 23 lives, of which many were charred to death, the one-man commission headed by Revenue and Disaster Management Principal Secretary Atulya Misra on Friday submitted its report to Chief Minister Edappadi K Palaniswami.The report has found glaring lapses on the part of forest officials.

The 125-page report, the details of which were not made public, blames field-level officers for getting caught totally unaware of how many trekkers were there inside the forest, when the fire broke out in Kurangani Hills in Bodi range in Theni district on March 11.

Without revealing details of the report, Atulya Misra told Express that lapses were found at all levels from trekking groups to field officers to people who operate tourism bungalows. “Lapses were there at various levels. Keeping those in mind, I have made several recommendations, including use of some of the latest and cheap technologies such as use of unmanned aerial vehicles fitted with high-resolution cameras which can be easily flown over a large area and help surveillance. I have also recommended standard operating procedure (SOP), which clearly defines the role of individual departments, besides having a repository detailing what resources are available at hand and with whom. I found that the district authorities were totally unprepared to deal with an emergency of such scale,” he said. 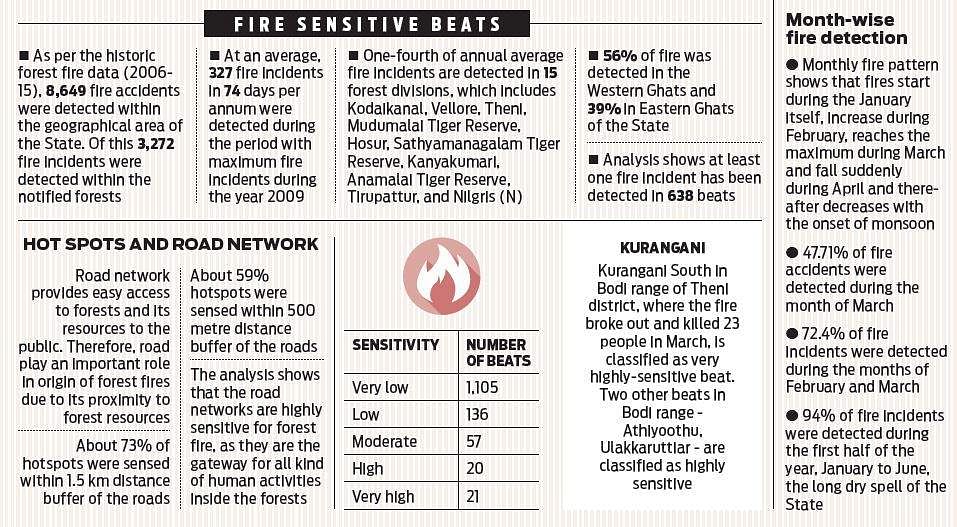 K Upadhyay, Principal Chief Conservator of Forest (Head of forest force), has refused to comment on failure of forest officials. “Without seeing the report, I can’t comment. Necessary action will be initiated based on the findings and recommendations of the report.”However, a senior forest official, who is privy to the investigation, said the reason for high causality was that trekkers wasted precious time taking selfies when the fire was chasing them.

“One group, including many children, led by a local guide, has sensed trouble and took the escape route early, but the others were taking selfies and suddenly wind changed direction, leaving them with little response time,” he said and added that they had also deviated from the authorised trek path.

The ‘Spatial and temporal analysis of decadal forest fire data (for the period 2006-2015)’ published by the Forest Department reveals 21 beats are classified as very highly sensitive for forest fires (with 20 and more reported fire incidents). Bodi Kurangani South is a beat that is classified as highly prone to fire in February-March.Two other beats in Bodi Hills, Athiyoothu and Ulakkarauttiar, are in the category “high” where 15 to 19 fire incidents have occurred.