An angry mob left ambulance and corporation staff bleeding when they tried to give a dignified burial for Dr Simon, a neurosurgeon, who died of coronavirus.

When his time came, Dr Simon Hercules, who had saved many lives in his career as a neurosurgeon, was denied a final resting place. The reason: Simon died of COVID-19. The 55-year-old breathed his last at a private hospital in the city on Sunday. Since then, his family and friends have had to live through nightmarish episodes, one after another.

First, civic officials made arrangements at the TP Chatram cemetery to bury Simon. However, an angry mob gathered there and protested against the decision. Despite multiple clarifications that the virus does not spread to others from dead people, they were worried. Subsequently, the body had to be taken to the nearby burial ground on New Avadi Road.

The mob there was further callous. They attacked the funeral party with sticks and stones, left healthcare workers bleeding.

“Sir passed away around 6.30pm,” says Dr K Pradeep Kumar, a colleague and friend of the deceased.

“We were all prepared to take the body to the TP Chatram ground, when sanitary inspectors informed us about the 300-odd mob that had gathered there,” says Pradeep.

“We have no idea how they found out we were going to bury him there. The officials told us they would look for alternatives.” It was then that the body was taken to the Velankadu ground on New Avadi Road.

As per the protocol for all COVID-19 related deaths, the body should be buried at least 12 feet below ground.

“Just 12-15 minutes after the JCB began digging the pit, a mob of around 70 people gathered with sticks and stones,” says Pradeep.

“Many of them were teenagers. They started attacking us viciously. The damaged the ambulance’s windshield. A few stones even hit sir’s body,” says Pradeep, choking up.

“The corporation officials, people digging the grave, and ambulance staff were all injured. They were bleeding. I didn’t know what to do. All I knew was I had to get sir’s body out of there.”

The ambulance driver managed to get the body out of the scene and Pradeep followed them in his car. 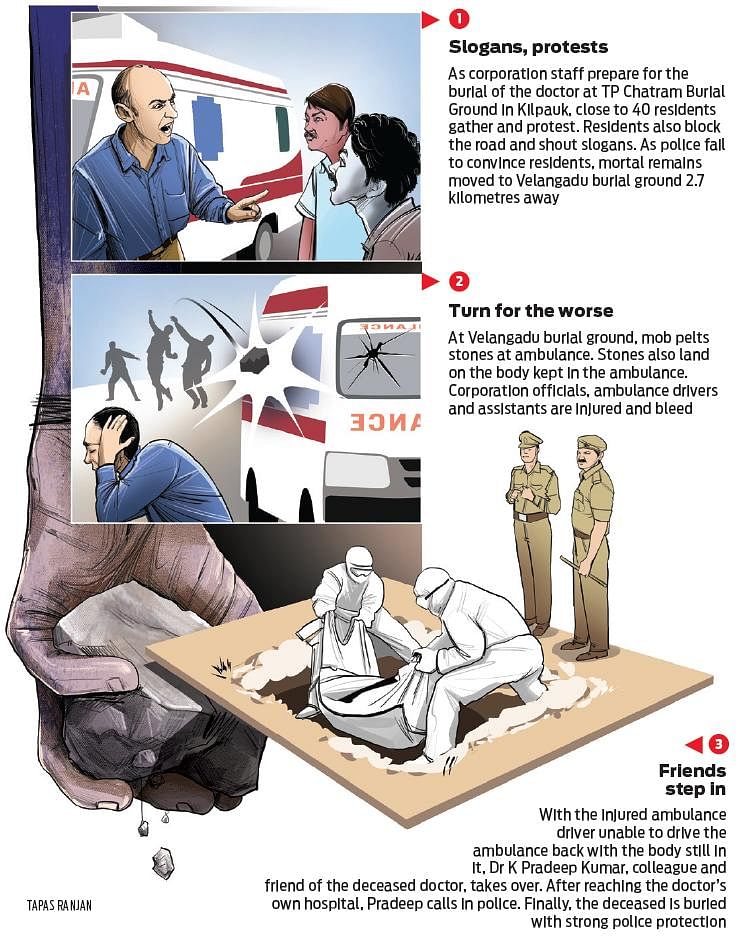 “The driver and his companion were bleeding. The driver told me he felt giddy. So I sent them to get medical help.” Pradeep left his car on the road and decided to drive the ambulance back to the safety of the New Hope Hospital, of which Simon was the chairman.

“With shattered glass all over the seat and wearing the personal protective gear, I managed to drive till our hospital,” says Pradeep.

Later, with the help of two ward boys at New Hope, Pradeep managed to take the body back to the same burial ground.

“This time I called my friends, policemen, and officials. We reached the ground only after the police came. We buried him with police protection, hurriedly,” says Pradeep.

“We were worried about being attacked. There was none to operate the JCB machine. So we took sand with our hands and covered the body manually. There was just one spade,” says Pradeep, adding that seeing them struggle, a few policemen came forward to help them out.

ALSO READ | He worked all his life for others, yet didn’t get a decent burial

“Such things should not even happen to our enemies. I hope we ensure such an incident does not happen again.”

The police on Monday arrested 20 people for damaging the ambulance and creating a ruckus at the burial ground. Cases have been booked under Section 188, 147, 148, 341, Tamil Nadu Private Property Prevention of Damage and Loss Act.

A senior police officer told Express that the arrested persons would be produced before the magistrate. However, he denied the role of gangs behind such incidents. “It is because of misinformation that people oppose the funeral of COVID-19 victims,” he said.

This is not the first such incident. A similar episode happened last week, during the burial of another doctor who died of COVID-19 in the same hospital.

In Coimbatore too, villagers protested against the burial of a government doctor who allegedly died of dengue. Officials say the villagers had mistaken his cause of death as COVID-19.