While Chennai and its neighbouring districts of Chengalpattu, Kancheepuram and Tiruvallur continue to contribute the most cases to the tally, the rest of the State has started reporting more cases.

CHENNAI: Fresh COVIDvid-19 cases and deaths across Tamil Nadu touched all-time highs on Sunday with the State reporting 2,532 cases and 53 deaths. The State capital, once again, topped the districts with 1,493 cases and 42 deaths.

The Statewide tally is now 59,377 and toll 757, while the figures for Chennai are 41,172 and 601 respectively. Among those to test positive is Rishivandhiyam MLA Vasantham K Karthikeyan (DMK), who is being treated at a private hospital in Coimbatore.

While Chennai and its neighbouring districts of Chengalpattu (121), Kancheepuram (64) and Tiruvallur (120) continue to contribute the most cases to the tally, the rest of the State has started reporting more cases. 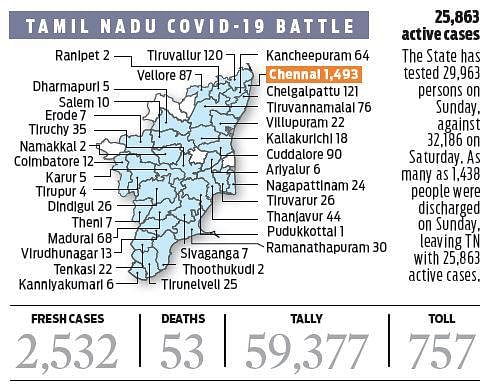 An analysis of data shows that samples tested in Chennai and its surrounding districts rose by 38.7 per cent from June 7 to June 20, while it rose by 39.3 per cent for the rest of the State.

However, while only 10 per cent of the cases reported on June 7 were from outside Chennai and its three surrounding districts, that figure tripled to 31 per cent on June 20, showing a huge spike in cases from other districts.

Three of the deceased had no co-morbid conditions, yet one of them died within a day of admission and another died in just four hours of admission. Grandson of producer B Nagi Reddy and trustee of Vijaya Hospital Sarath Reddy, who was being treated at the Vadapalani hospital, died in the early hours of Friday.