According to the sources, the building is designed to accommodate more Ministers, once the Assembly seats are increased from 119 to 153 as proposed in the AP Reorganisation Act, 2014.

HYDERABAD: The new Telangana Secretariat building, once constructed, will be the tallest structure — 278 feet, dwarfing several historic monuments in the country.

According to the sources, the building is designed to accommodate more Ministers, once the Assembly seats are increased from 119 to 153 as proposed in the AP Reorganisation Act, 2014. 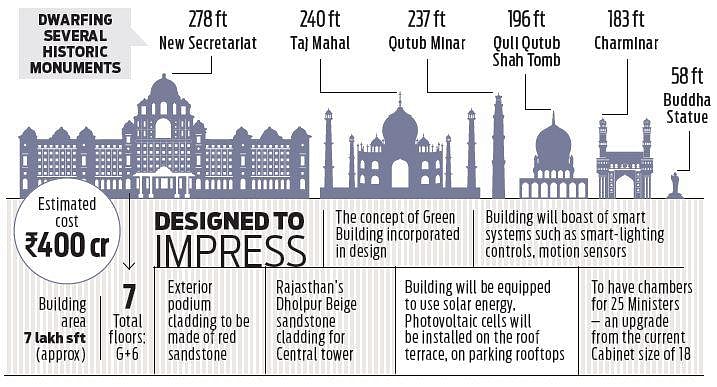 Every Minister’s chamber will have eight compartments, which means there will be 200 compartments. This will provide office space to Secretaries and other staff members.

The Chief Minister’s Office (CMO) will be on the seventh floor, which will be the top-most floor of the Secretariat.

The CMO will have 30 compartments. The east-facing Secretariat building will measure 600 ft by 300 ft. The front-side glasses will be in blue colour and it has been decided to use Dholpur Beige Sandstone from Rajasthan.

Dismissing allegations that the new building is inspired by the Nizam’s architecture, the project’s engineers told The New Indian Express that its inspiration is the 1,000 Pillar Temple in Warangal.

The Secretariat will have five domes in its central part, just like the temple. “Chief Minister K Chandrasekhar Rao directed us to ensure that the building is long-lasting as it will be the pride and icon of Telangana,” the designers said.

“Its structure will be robust and life more than 100 years,” sources said. “We are proud be part of this project.” an engineer said. 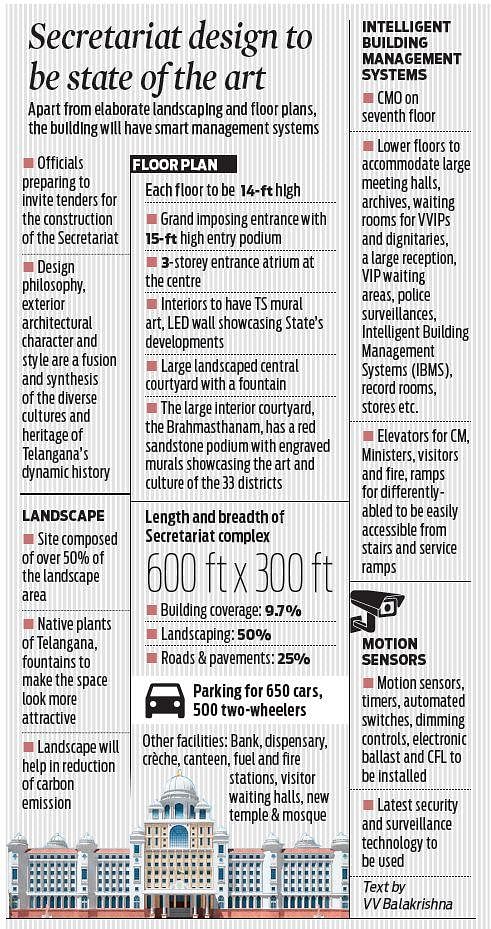 Now we are on Telegram too. Follow us for updates
TAGS
Telangana Secretariat Telangana