While Deepika appeared anti-establishment, husband Ranveer Singh, otherwise loud, flashy and full of OTT antics, has been stoking another kind of silence.

How does star power manage a ‘snowball effect’ on public opinion? Is it the brand; or the lives lived on screen which makes for a certain aura and adds to the infallibility of the person? Deepika Padukone had the nation talking when she came out of the blue in all black and appeared to ‘resolve’ the grey lines in a controversial campus episode which has so divided India. The New Indian Express takes a re-look at the ‘crisis’ and the ‘persona.’

Last week when Deepika Padukone made an unscheduled and surprising appearance on the Jawaharlal Nehru University campus in New Delhi, she had the nation riveted. She stood there, speaking nothing, but captured all the attention.

Head-to-toe in black — incidentally the colour of the Hong Kong protests —Deepika appeared in the crowd stealthily like a ninja, interacted with the JNUSU president Aishe Ghosh with folded hands, listened to former JNUSU chief Kanhaiya Kumar with eyes lowered and took off quietly.

Here was the star wielding her immense brand power, drawing eyeballs and forcing people to think — a big influencer! By that one act, she may have heaped attention on JNU to such extent as to give the students movement some legitimacy among people who generally dismissed them as ‘rabble-rousers’ and ‘anti-nationlists’; and delegitimised the attackers who wielded the stick, while putting the police and administration in a dilemma on how much further force to use to tackle the ‘rebellion’. It, in effect, brought caution into play.

“Why was she there after all?” was the question, which hung on social media for days. Some attributed ‘a conscience’, others, ‘publicity’ to bolster her maiden directorial venture Chhapaak and ensure its success.

The overwhelming sentiment was, ‘She has risked herself — her standing, her fame, her films.’ The unforgiving bayed for blood-a boycott of Chhapaak. 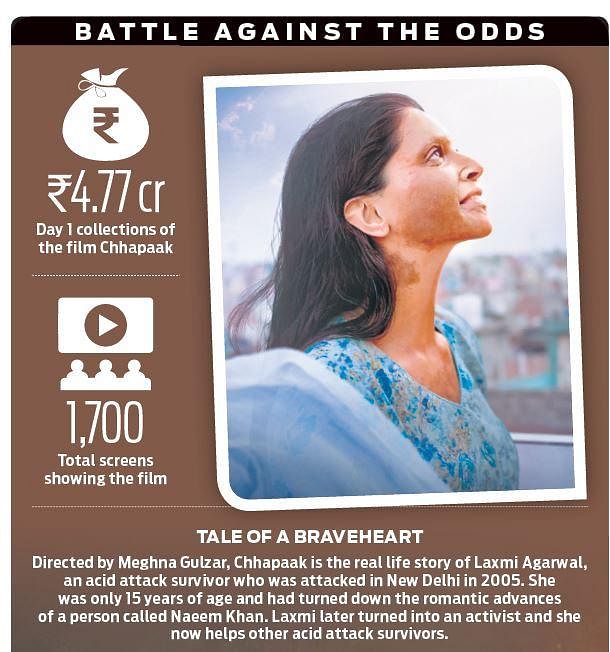 Deepika’s voiceless act, however, was ‘different’, a political stunner, and came at a juncture when the JNU happenings had again been turned to questions of ‘national virtues’ vs ‘anti-national’ and when political capital was sought by either sides over it amidst a deeply divided public opinion.

The act forced Bollywood stars, only known for ‘onscreen activism in their movies’ till now, to join the ‘campus movement,’ which had till recently only JNU alumni Swara Bhaskar as its B-town poster-girl, among a few others.

Brand power has been known to influence public opinion, radically at times. Closer home there have been examples in the successes of silver screen personalities — NTR, Jayalalitha, MGR Tamil Nadu and Andhra Pradesh who challenged status quo in politics. Their larger than life screen presence had helped.
Then, there have been stars ‘nominated’ to politics — Rajesh Khanna, Dharmendra, Amitabh Bachchan, Hema Malini etc. — talking selectively on issues, steering off the controversial.

There are also the Mahesh Bhatts and Anupam Khers and Paresh Rawals taking up social and political causes strongly at times. The Johars and the Kapoors have been silent though.

Unlike Tollywood, where the Bengal history steeped in Tagore and Bankim Chandra Chattopadhyay in the context of the legacy of the freedom movement and struggles of people, besides the rich cultural and artistic connect on campuses and the countryside where Baul too stirs the soul, the Bollywood majority has kept away from voicing its feelings on any issue.

The surprise, this time, were the numbers which stood out to condemn the campus violence. Alia Bhatt, Sonam Kapoor, Hansal Mehta, Anurag Kashyap, Anubhav Sinha, Jim Sarbh, Dia Mirza, Shabana Azmi and family (Javed, Farhan and Zoya Akhtar), have been among the growing list of angry Indians, the latest being Kartik Aryan.

LOST IN THE MIDDLE

“Maybe they were waiting, testing the waters, whether JNU would die out on its own like #MeToo and the lynchings, over which many had chosen silence,” said freelance lifestyle writer Salva Mubarak, who has taken up the cudgels to correct the “spine” of celebrities on her online parody magazine, Rayon.

There were still those who sent out PR crafted statements that sort of appease both sides. And then you had Kangana Ranaut saying, “In our population, only three to four per cent people pay taxes. Others are actually dependent on them. So, who gives you right to burn buses, trains, create ruckus?”

Being politically articulate is not every actor’s forte, maybe why Deepika chose presence over speech. Alia, who recently tweeted a wrong Preamble, would know. Yet, she has continued to voice her concerns, undeterred.

Even Taapsee Pannu. Despite admitting in an interview that she hadn’t expressed her views on CAA because “I haven’t studied about it”, Pannu is distressed over violence in universities.

“CAA or no CAA, what happened in JNU is totally wrong,” she tells us. “Violence on students and teachers is brutal to a level that it can’t be tolerated anymore. I get petrified imagining that a few years back, when I was in college and if this would’ve happened, how I and my family would’ve felt, and how I would’ve expected my country to stand by the students. No political agenda can justify this assault. It’s plain, simple WRONG.”

Her Twitter bio says it all, “all in all REAL.... with flesh, blood and SPINE :)” and her feed is populated with videos on the student movement.

While Deepika appeared anti-establishment, husband Ranveer Singh, otherwise loud, flashy and full of OTT antics, has been stoking another kind of silence.  Another puzzle is Twinkle Khanna-Akshay Kumar.

For the tweet wherein Khanna condemned Jamia violence – “India, where cows seem to receive more protection than students, is also a country that now refuses to be cowed down…”, she got trolled by people asking her to pass on the advice to her own husband, who fuelled a PR nightmare with his “accidental like” of a video that justified Jamia students.

Whether politics continues to be a thorn in these star-marriages, just like in the US where couples reported to have hit rock bottom with one spouse all for Trump and other hotly against, only time will tell.

But another ‘duo’, Ajay Devgn-Saif Ali Khan, got quite jittery at a recent interview to promote their movie, Tanhaji: The Unsung Warrior, that shared the release date with Chhapaak.

“If Saif says something, people will go out and start protesting. They will ban a film called ‘Tanhaji’. Who is going to suffer? The producer, that’s me. He does not have the right to make me suffer...” as if signaling Saif to stay mum. Saif, in a later interview kept it simple, saying he needs time to read up.

His “India will be defined by either the judiciary or the government or ultimately the people and we will know in what kind of environment we are living in,” wins hands down as the safest, on-the-fence quote from Bollywood.

Then there is the studied silence of the Khans-Shah Rukh and Aamir. It’s public knowledge that both had voiced their fears over the growing ‘intolerance’ in the country in 2015, for which Snapdeal terminated its contract with Aamir as its brand ambassador.

Also perhaps why, Priyanka Chopra, who is facing a backlash for issuing just one feeble tweet on the tensions here, is quieter. Perhaps because she saw how cousin Parineeti was allegedly dropped as the face of the ‘Beti Bachao, Beti Padhao’ campaign by the Haryana government for her tweet on the Jamia violence.

The reaction the Khans got earlier is ‘why they’ve not actively spoken out on politics of the day’, says noted art and film freelance journalist, Ayaz Sheikh.

“Some actors like Swara are activists and will raise their voice. But overall, celebrities have a lot to answer for and a lot more to lose. They don’t want to ruffle feathers, films to suffer, protestors landing at their door and Twitter going after them,” he adds.

Salva Mubarak, who is a big SRK fan, says the stars don’t have an excuse to play safe.

“They are in a position of immense privilege, power, and influence. You can’t keep crying about being told to go to Pakistan. Yes, you will face losses but will it really affect your life? If people with lesser resources are on the streets protesting, how can these stars justify doing nothing?”

But TV actor and presenter Sushant Singh can’t understand the obsession with the public wanting Bollywood stars to comment. Without getting into the gendered argument of why the number of A-list actresses are protesting loudest, he asks, “Why are we even looking up to them? To express my freedom of opinion or not to; both are part of freedom of speech.”

Sushant has lodged a complaint with CINTAA (Cine and TV Artiste’s association) where he’s the general secretary, claiming his contract with the show Saavdhaan India was prematurely terminated after he expressed his anti-CAA views.

He admits he’s “looking for work” and recollects how he was always the activist, did plays in college across Delhi to protest the Mandal Commission and always used wry humour to point out scams in all governments.

“Often I ask myself, am I over-reacting? What are the pitfalls? I keep reading to reconfirm my thoughts, my analysis, to check if I am paranoid. Fortunately, or unfortunately, it seems I’m not paranoid,” says Sushant.

His friend and actor Mohammad Zeeshan Ayub Khan, also a Kirori Mal alumni like Sushant, reasons that the opinion of stars matter because “in this country, our actors are larger-than-life. You start believing that person is part of your life, and it’s understandable why people are getting affected by those not taking a position on the issue,” says Khan, who did a shout-out video on social media, asking everyone to join him on New Year’s protest. Ranjani Mazumdar, professor of cinema studies at JNU’s School of Arts & Aesthetics,  was quoted in the media as saying, “Stars can play a huge role in opinion building, and Deepika is an A-list star. She has ensured there is mainstreaming of JNU in the public domain. And, she has also left for the future generation a digital trace of what stars can do. Hollywood has done this always by refusing to accept the Oscars during the Vietnam War, taking positions on issues. Jane Fonda was known as Jane Hanoi. Then there is Susan Sarandon. This becomes part of popular memory.”

Stay up to date on all the latest The Sunday Standard news with The New Indian Express App. Download now
(Get the news that matters from New Indian Express on WhatsApp. Click this link and hit 'Click to Subscribe'. Follow the instructions after that.)
TAGS
JNU violence Bollywood Deepika Padukone CAA NRC Protests Aishe Ghosh JNUSU