TDP president and chief minister N Chandrababu Naidu who won from Kuppam assembly constituency has stepped down as the Andhra Pradesh CM.

With YSR Congress Party almost decimating TDP out of power in Andhra Pradesh, Jagan Mohan Reddy who steered his party YSRCP to a spectacular victory in the Assembly and Lok Sabha elections is set to take oath as Chief Minister of Andhra Pradesh on May 30.

With YSR Congress Party gaining a landslide victory in the 2019 Assembly elections, Jagan Mohan Reddy has repeated what his father had achieved in 2004 when he dislodged Telugu Desam Party's (TDPs) N Chandrababu Naidu out of power.

In election trends, YSRCP is leading in 22 out of 25 Parliamentary Constituencies in Andhra Pradesh and TDP only on three, while in 175-member State Assembly, Reddy is leading on 149 seats with TDP marginalized to 25 and Pawan Kalyan Jana Sena Party to only 1.

READ: Jagan and his battle for political survival

In the 2014 Assembly elections, TDP had formed the government with 102 seats while YSRCP bagged 67 seats.

"It is the victory of people of Andhra Pradesh," Jagan said in his post on Facebook as the trends showed the YSRCP leading in 150 seats in 175-member Assembly.

Jagan thanked the people for blessing the YSRCP with their support and votes and said he would try to live up to the people's expectations.

IN PICS: It's celebration time in the BJP, YSRC and DMK camps

The assembly elections in Andhra Pradesh mark a defining moment in the political scene of the state.

The victory of Jaganmohan Reddy has put a massive question mark on TDP President Chandrababu Naidu's attempt to mark his stamp in national politics with the formation of the Third Front. Though Naidu allied with the BJP in 2014 Lok Sabha elections, this time he decided to fight alone and against the BJP.

I respect people's mandate and hope that the new govt will live up to their expectations and serve them with honesty.

My heartfelt congratulations to @ysjagan garu.

Lauding Sri @Naveen_Odisha for his thumping win in Odisha.

Nara Lokesh wins from Mangalagiri assembly seat by 5300 votes to A Ramakrishna Reddy of YSRC.

Congratulations @ysjagan on your resounding Victory. The people of Andhra have put their faith on your young shoulders and it is your responsibility now to take the State forward. The late YSR would be proud today. My good wishes.#CitizenMukherjee

Hearty congratulations to @ysjagan and Heart felt condolences to @ncbn

Will let people know future course of action after reviewing the results, says Chandrababu Naidu in a brief presser.

TDP chief @ncbn submitted his resignation to the Governor a while ago. #APElectionResults2019 pic.twitter.com/ksR6nDLP8w

Jagan and his battle for political survival: A profile

The hard work Jaganmohan put in since May 2017 is perhaps unprecedented in the annals of Independent India's political history. Like his father, Jagan undertook a statewide padayatra covering 3,641 km and interacting with at least two crore people in 14 months - a feat unmatched by any other politician.

Congratulations @ysjagan anna for the unprecedented victory. The victory reflects on your representation as an MLA from all the 175 constituencies and not just pulivendula.

@ysjagan announces that his swearing-in ceremony would be held in #Vijayawada on May 30. Earlier, there were reports that he'd do it in #Tirupathi.#ElectionsWithTNIE #AndhraPradeshElection2019

Mandate comes with huge amount of responsibility, will take oath in Vijayawada on May 30: Jagan

People have voted for credibility: Jagan

We are winning 25 out of 25 #MP seats and also more than 150 of the 175 #Assembly seats; this is unprecedented #YSRC @ysjagan @NewIndianXpress #ElectionsWithTNIE#LokSabhaElections2019#ElectionResults2019

Thank you India! The faith placed in our alliance is humbling and gives us strength to work even harder to fulfil people's aspirations.

I salute every BJP Karyakarta for their determination, perseverance & hardwork. They went home to home, elaborating on our development agenda.

Chandrababu Naidu to resign this evening

Chief Minister N Chandrababu Naidu will tender his resignation on Thursday evening following the debacle of Telugu Desam Party government. TDP sources said that Mr Naidu would send his resignation letter to Governor ESL Narasimhan. Naidu is not available to the media till now, reports UNI.

Jagan thanks people of Andhra

"It is the victory of people of Andhra Pradesh," Jagan said in his post on Facebook as the trends showed the YSRCP leading in 150 seats in 175-member Assembly. Jagan thanked the people for blessing the YSRCP with their support and votes and said he would try to live up to the people's expectations.

Congratulations on the remarkable win in Andhra Pradesh. Best wishes to you for a successful tenure.

YSRC Chief YS Jagan Mohan Reddy marching towards victory in Pulivendula with a lead of over 74,000 votes against his rival.

TDP is all set to lose 31of 35 seats in North Andhra. YSRCP decimated TDP in Vizianagaram. Jagan's YSRC is going to win all seats except Itchapuram in Srikakulam District. In Visakhapatnam district YSRCP is going to win 12 of 15 seats.

TDP trailing in all the seats in Kadapa, Nellore and Vizianagaram districts.

Jagan to offer prayers at Tirumala Lord Venkateswara Temple on May 30 and swear in as CM of AP at a function to be organised at Tarakarama Stadium in Tirupati.

'Your hardwork has paid off': KTR congratulates Jagan

Wholehearted congratulations to Sri @ysjagan Garu on a landslide victory👏. Your hardwork has paid off in the form of overwhelming blessing of people👍

YSRC's Rama Krishna Reddy much ahead of Nara Lokesh by 8949 votes in Mangalagiri.

In Mangalagiri, where Nara Lokesh is in the fray, YSRCP is leading

#Vijayawada #Parliament seat is the only seat where #TDP is leading; #YSRC lost the seat in 2014 also @NewIndianXpress #ElectionsWithTNIE#LokSabhaElections2019#ElectionResults2019

Deputy CM from TDP China Rajappa is leading with 2174 votes in Peddapuram. YSRC's T Saraswati is behind him.

Businessman-turned-MLC and outgoing #TDP minister from #NelloreCity P Narayana is far behind #YSRC's Anil Kumar by 4052 votes. This is Narayana's maiden poll fight. He was earlier elected to council through nomination. #AndhraPradeshElection2019 #ElectionsWithTNIE

Pawan Kalyan (JSP) leading in one seat and trailing at another

YSRC elected legislators to meet on May 25 to elect their leader; YS Jaganmohan Reddy likely to be sworn in as the Andhra Pradesh chief minister May 30, reports TNIE correspondent Phareesh. 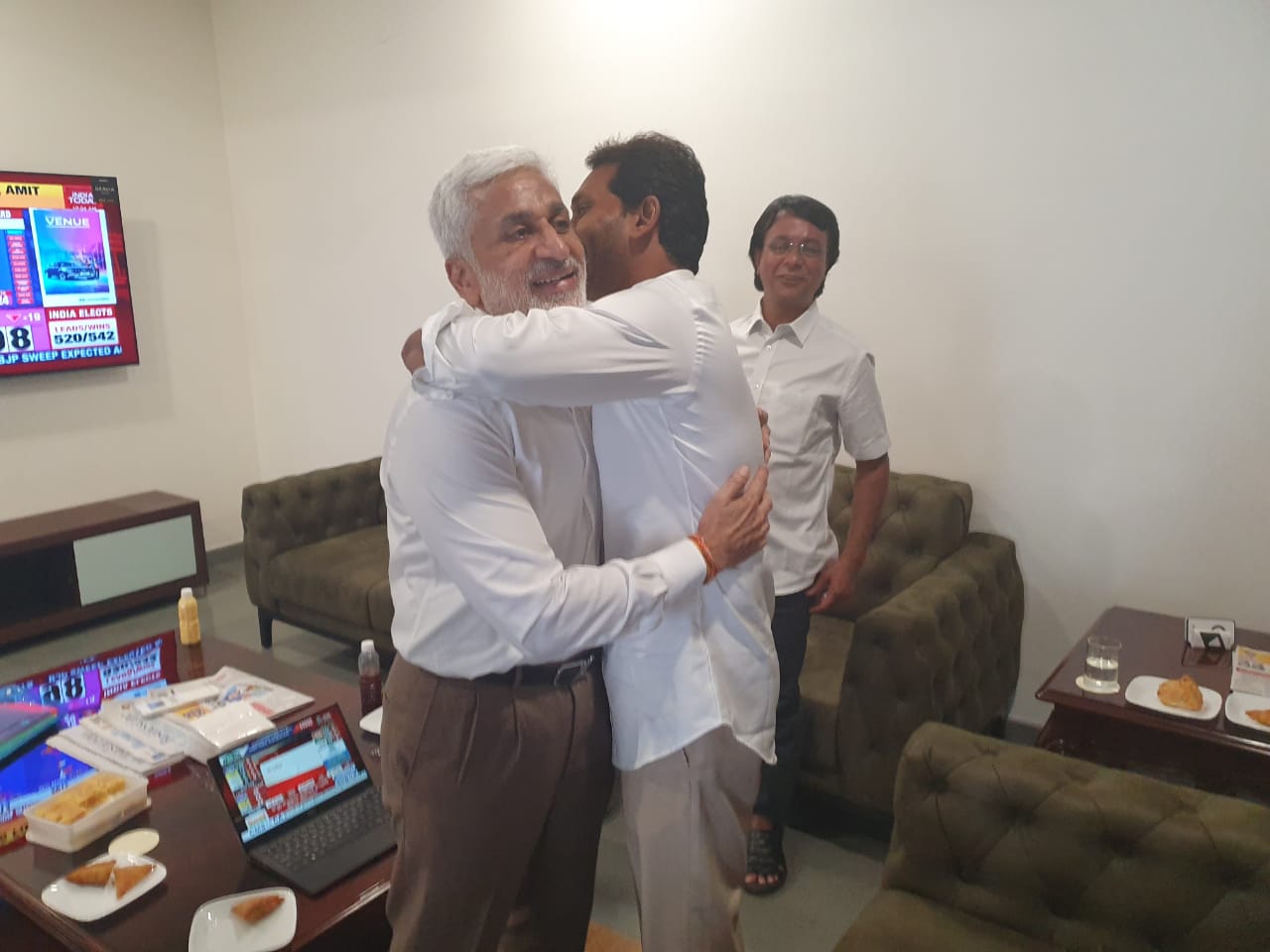 After round two, YSRCP leading by 2816 votes in Mangalagiri.

In CM Chandrababu Naidu's Chittoor district, Opposition YSRC leading in 13 out of 14 seats.

#PawanKalyan trailing in both Gajuwaka and Bhimavaram @NewIndianXpress

YSRC takes big leads in Kadapa and Nellore districts. Leading in all the 10 seats in both districts. 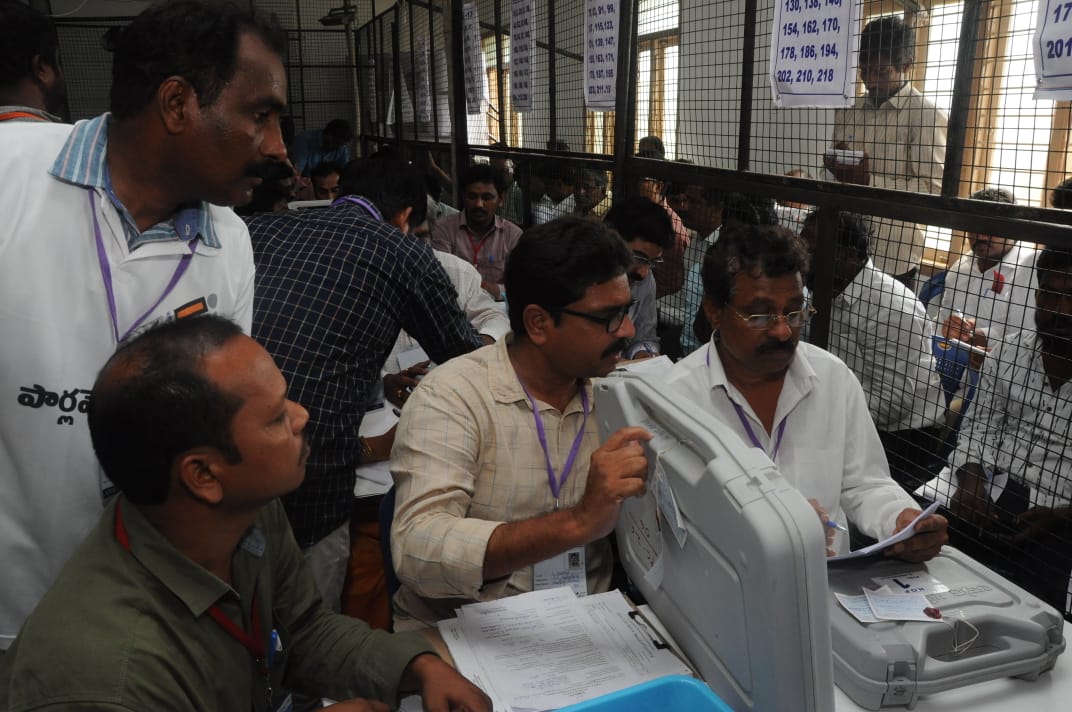 Counting underway at a centre in Vijaywada. (Photo | EPS) 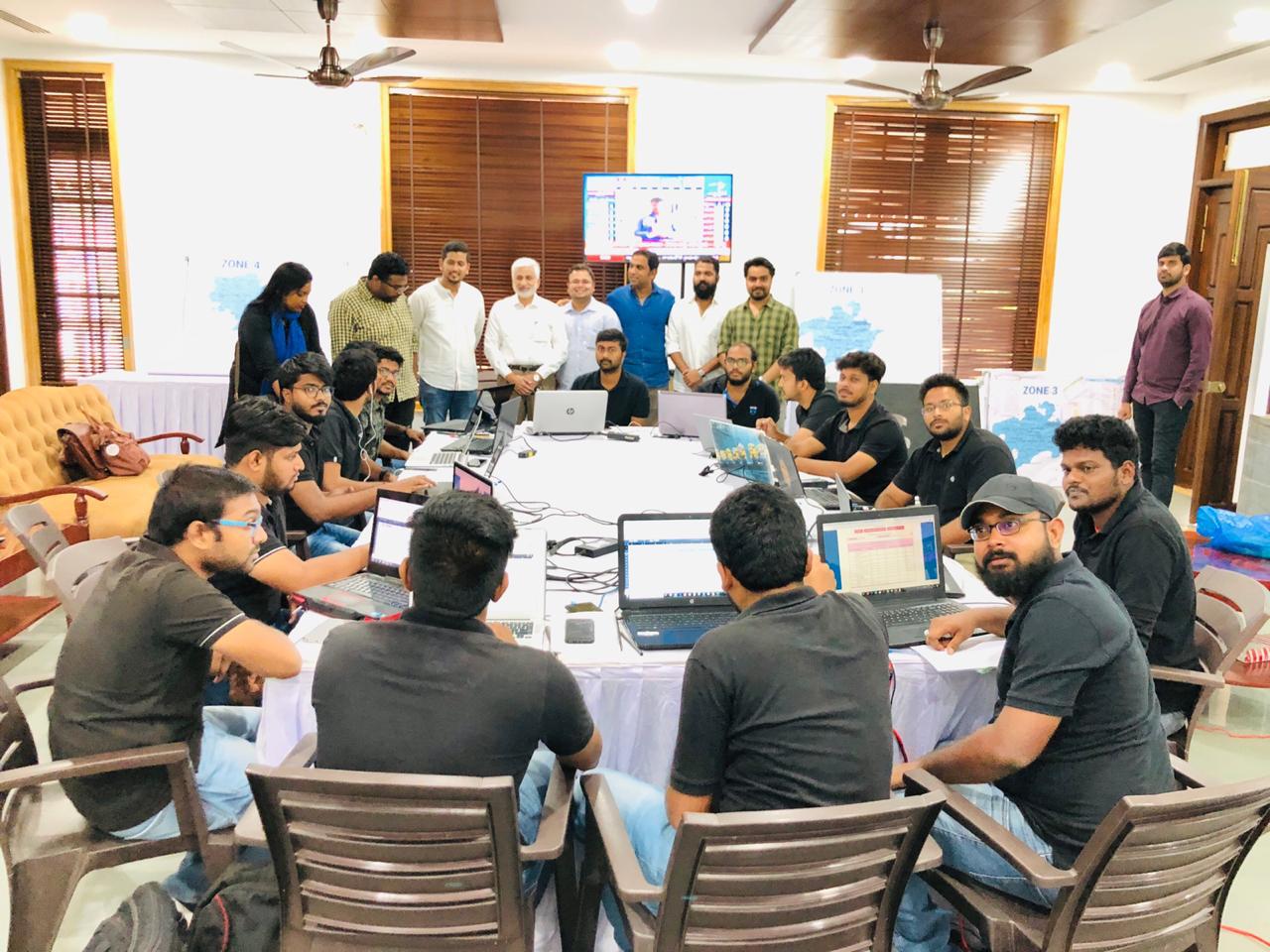 YSRC leading in all the 10 Assembly seats and two Parliament seats in its bastion, Kadapa district.

Will support anybody who gives special status to Andhra: YSRCP

The YSRCP made it clear on Wednesday that it was not averse to supporting any party or grouping, provided its condition of special status to Andhra Pradesh was met.

In Andhra Pradesh, YSRCP is leading on 9 out of 25 Lok Sabha seats

Exit polls had predicted a sweeping victory for YSRCP

It may be recalled that the exit polls released on the evening of 19th May had predicted a landslide victory for Jaganmohan reddy's YSRCP in Andhra Pradesh.
Intriguingly, while most predicted a YSRC sweep in both the Lok Sabha and Assembly elections, exit polls by Today’s Chanakya, C-Voter-Republic TV, and RG-Flash of former MP Lagadapati Rajagopal favoured N Chandrababu Naidu’s Telugu Desam Party holding out hope for the yellow party and suggesting that the results might go down to the wire.

First result from AP likeky to be of #Narsapur #Assembly Constituency; last would be #Rampachaodavaram #ElectionsWithTNIE#LokSabhaElections2019#ElectionResults2019

This is the first general election in the state after the bifurcation of Andhra Pradesh, and formation of Telangana, in June 2014.

Andhra Assembly results 2019: These are the key battles

In the Lok Sabha elections with 25 seats, the YSRCP, BJP and JSP are looking to take a share which will make the incumbent TDP vulnerable and they will have tough battle. On the assembly elections with 175 seats, the TDP managed to get the majority allying with BJP but this time around, the
YSRCP looks to return to power and it's going to be neck to neck. Here are the key battles:

> Nara Lokesh, son of TDP chief N Chandrababu Naidu and incumbent IT Minister for the first time has contested elections from Mangalagiri. His rival is YSRC candidate and incumbent MLA A Ramakrishna Reddy. The latter won the 2014 election with a wafer-thin margin of 12 votes. Reddy’s nearest rival in the last election was  Ganji Chiranjeevi of TDP.

Following the alert from the Ministry of Home Affairs and Central Intelligence Bureau that they are chances of violence on the counting day on Thursday, State police are on high alert and deployed additional forces in around 25 problematic segments such as Pulivendula, Kuppam, Nagiri, Chandragiri, Nellore city, Ongole, Sattenapalle, Mangalagiri, Gudivada, Mylavaram, Dendulur, Rapthadu and other segments.

Counting to begin at 8 am

Counting will commence at 8 am with postal ballots and service votes before EVM are taken up at 8.30 am. On completion of this, officials will pick up five VVPAT slips from each Assembly segment through lottery system for counting. Counting of each VVPAT box will take 30 to 45 minutes and more depending on the number of slips.

Who is going to be the Chief Minister? Will TDP chief Chandrababu Naidu retain power or will YSRCP’s Jagan Mohan Reddy end the reign of his political rival? The six-week-long nail-biting wait of people in AP to know the fate of the two main contenders and their respective party candidates will come to an end by noon Thursday, as election trends for 175 Assembly and 25 Lok Sabha constituencies are likely to be known by that time.