Earlier in the day, home minister announced in the Parliament the scrapping of Article 370, which gave J&K a special status.

“The Article 370, notwithstanding anything in the foregoing provisions of this article, the President may, by public notification, declare that this article shall cease to be operative or shall be operative only with such exceptions and modifications and from such date as he may specify: Provided that the recommendation of the Constituent Assembly of the State referred to in clause (2) shall be necessary before the President issues such a notification,” read out Shah in the ruckus in the Upper House of Parliament.

As Shah was reading his statements, sentiments ran high in the house. The opposition was shouting, a copy of the Indian constitution was torn and the opposition even went on to sit in the well of the house. PDP's RajyaSabha MPs Nazir Ahmad Laway was the one who tore a copy of constitution and was marshalled out along with party MP MM Fayaz.

Another member unbuttoned his shirt and sloganeering continued to protest the introduction of resolution to abrogate Article 370 and reorganisation of Jammu and Kashmir by Home Minister Amit Shah.

Home Minister Amit Shah said in his statement that there is a provision in article 370 that allows president authority in this regards.

"Twice efforts have been made in 1952 and 1962 to do the same. We can pass this with majority in house," Shah told the house following members raised objections.

Ghulam Nabi Azad countering Shah's address said, "Entire valley is under curfew, political leaders including three former chief ministers are under house arrest. There is a war-like situation in the state, so this should be discussed on priority"

The groundbreaking announcement came soon after Prime Minister Narendra Modi held a cabinet meeting at his residence this morning.

#WATCH Ladakh: BJP workers celebrate in Leh after Union Government passes a resolution to revoke Article 370 and Ladakh and J&K be made Union Territories. pic.twitter.com/MZr7nwzYX3

Telugu Desam Party supports the Union Govt as it seeks to repeal Article 370. I pray for the peace and prosperity of the people of J&K.#Article370

Ministry of Home Affairs: It is requested to take special care to ensure the safety and security of residents of Jammu & Kashmir, especially the students in various parts of the country. https://t.co/G1GQgXxQDV

While some political parties welcomed the 'historic decision', a section of leaders slammed the government's decision calling it a failure and murder of democracy.

Among the first to slam the historic decision was former J-K chief minister Mehbooba Mufti. The PDP leader who is reportedly under house arrest said, "Today marks the darkest day in Indian democracy. Decision of J&K leadership to reject 2 nation theory in 1947 & align with India has backfired. Unilateral decision of GOI to scrap Article 370 is illegal & unconstitutional which will make India an occupational force in J&K."

It will have catastrophic consequences for the subcontinent. GOIs intentions are clear. They want the territory of J&K by terrorising it’s people. India has failed Kashmir in keeping its promises.

Statement of Omar Abdullah, Vice-President of National Conference and ex-CM of J&K 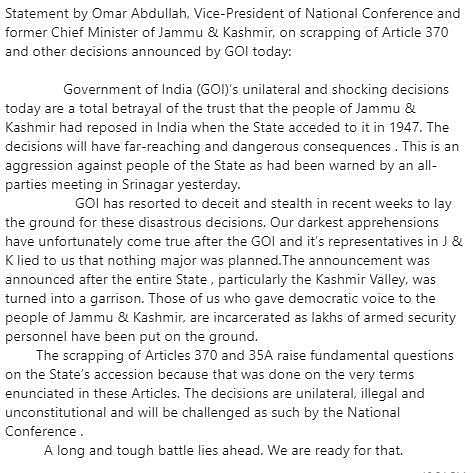 Congress' Ghulam Nabi Azad also pulled no punches "I strongly condemn the act of PDP's Mir Fayaz and Nazir Ahmed Laway who attempted to tear constitution. We stand by the constitution of India. We will sacrifice our lives to protect the Indian constitution, but today BJP has murdered constitution," he said. A border state, which is culturally, geographically, historically&politically different was bound together by Article 370. Drunk in power and to get votes, BJP govt scrapped 3-4 things. They've cut off head of the country. Political parties will fight&stand with J&K.

PDP's RS MPs Nazir Ahmad Laway&MM Fayaz protest in Parliament premises after resolution revoking Article 370 from J&K moved by HM in Rajya Sabha; The 2 PDP MPs were asked to go out of the House after they attempted to tear the constitution. MM Fayaz also tore his kurta in protest pic.twitter.com/BtalUZMNCo

You have played with the sentiments of people of Kashmir. When additional army personnel were deployed there, I was worried. Kashmir should not become Kosovo, East Timor and South Sudan. I am opposing this Bill (Article 370). This is a day of shame, shame, shame...this is murder of democracy.

Former Attorney General Soli Sorabjee: I don't think there is anything revolutionary here. It's a political decision even though it is not a wise decision.

Constitution expert Subhash Kashyap: I can only say, constitutionally it is sound, no legal & constitutional fault can be found in it. Govt has carefully studied the matter. As for the question, if it's a political decision, I have nothing to say on that.

DMK President Stalin, said, "Without consulting people of Jammu and Kashmir, Article 370 has been taken away. Democracy has been murdered. AIADMK is also supporting the decision which is condemnable."

You're creating another Palestine: TK Rangarajan

CPI(M) leader TK Rangarajan said, "It's black day. Indian constitution has been raped by BJP govt. You didn't consult people of J&K-Ladakh. You dissolved Assembly, you don't want to hold any election. You've taken another 35000 Army people there. You're creating another Palestine."

BSP MP Satish Chandra Mishra announced his party's  "complete support" to the bill. We want that the Bill be passed. Our party is not expressing any opposition to Article 370 Bill & the other Bill, Mishra said in RS.

We support the govt on its decisions on J & K. We hope this will bring peace and development in the state.

BJP MP from Ladakh Jamyang Tsering Namgyal said, I welcome the Bill on behalf of everyone in Ladakh. People there wanted the region to be a Union Territory. People in Ladakh wanted that the region be freed from the dominance and discrimination of Kashmir, that is happening today.

BJD MP Prasanna Acharya said, "In real sense today, Jammu & Kashmir has become a part of India. My party supports this resolution. We are a regional party but for us nation is first."

Shiv Sena's Sanjay Raut: Today Jammu and Kashmir has been taken. Tomorrow we will take Balochistan and PoK. I am confident that we will fulfil PM's dream of 'Undivided India'.

Welcoming the 'courageous step' by the government, Rashtriya Sevak Sangh said, "This was very essential for interest of J&K as well as the entire country. Rising from selfish motives and political differences, everyone should welcome and support this move."

A historical wrong has been undone today. Article 35A came through the back door without following the procedure under Article 368 of the Constitution of India. It had to go.

JD (U) leader KC Tyagi said, Our chief Nitish Kumar is carrying forward the tradition of JP Narayan, Ram Manohar Lohia & George Fernandes. So our party is not supporting the Bill moved in the Rajya Sabha today. We have different thinking. We want that Article 370 should not be revoked.

What was Article 370 which government scrapped today. 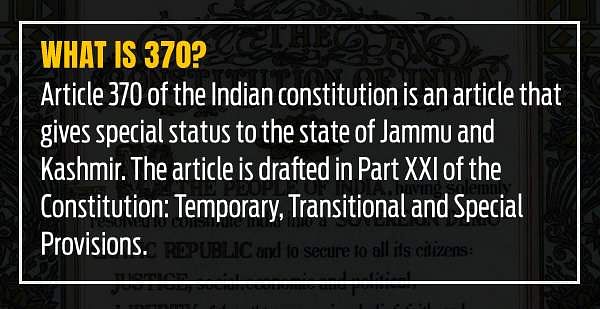 A morning of many meetings

Cabinet meetings generally take place on Wednesdays, though there are instances when it has been called on other days to consider important issues.

Before the Cabinet meet, the PM reportedly chaired a meeting of the Cabinet committee on security.

According to media reports, Amit Shah also had a one-on-one meeting with the Prime Minister.

Union Minister for Law and Justice Ravi Shankar Prasad met the Home Minister Amit Shah ahead of the Cabinet meeting, with the government likely to table legislative proposal to give effect to decision concerning the state.

The cabinet meeting was scheduled with just three days of the Budget session of Parliament remaining. BJP leaders, however, argued that the security build-up is to “scorch remnants of terrorism in the Valley ahead of the Assembly polls.”

Meanwhile, the state has become a fortress with deployment of over 38,000 additional security forces. Senior political leaders from the Valley have been put under house arrest. The internet and telephonic services have also been disconnected in the valley.

Stay up to date on all the latest Nation news with The New Indian Express App. Download now
(Get the news that matters from New Indian Express on WhatsApp. Click this link and hit 'Click to Subscribe'. Follow the instructions after that.)
TAGS
kashmir security crisis cabinet meeting Article 35A Article 370 Amit Shah PM Modi