Army of volunteers: How a Kerala community kitchen feeds the needy amid COVID-19 lockdown

Sheela reaches the small building near Ambalappuzha Block Panchayat Office in Alappuzha district around 7:30 in the morning. She is soon joined by two or three other women who enter the kitchen of the building -- which used to be an all-women restaurant of the 'Kudumbashree Mission' before the lockdown was imposed -- to start the day's proceedings.

What used to be a commercial eatery under the government-run women's empowerment group now serves a slightly different but even higher purpose. It is the community kitchen that feeds hundreds in the Punnapra North Grama Panchayat.

Sheela and her colleagues hardly have any time to waste. While some start washing and chopping vegetables, others light the gas stoves and get the utensils ready. The rice is washed and the water to cook it on the fire by the time the volunteers start coming in the next hour with the list of families expecting their food for the day.

The volunteer teams called "Aarogya Sena" consisting of local youth were formed after Chief Minister Pinarayi Vijayan announced the decision to open community kitchens in all 941 panchayats of the state on March 25. The idea was to use the ground-level resources of the local self-governments to make sure that nobody, the socially and financially downtrodden in particular, starves as a result of the lockdown. Kerala's pet social programme, Kudumbashree, was summoned once again to lead the mission from the front and allotted a sum of Rs 23.64 crore.

While some kitchens become functional the next day after the CM's presser, it has only been two days since it started in Punnapra North. The volunteers were recruited directly by the Panchayat officials who asked interested youngsters to show up at the office with a photo. A maximum of eight were chosen from each ward and given a stamped ID card to save them from trouble if challenged by the cops for breaking the lockdown in the line of service. The "Aarogya Sena" is allowed a volunteer captain as well, who serves as a team leader, coordinating all the activities with the officials.

"While a core team of 10-15 members arrives at the kitchen early to support the cooking staff, the rest of the volunteers arrive around 12:00 pm when it is time to distribute the food," said Arun Lal, who is the captain for Punnapra North.

Distribution to the nearest wards begins around 12:00 pm. All teams are on their way to deliver the packs by 1:15 pm and return before 2:00 pm, he said.

Separate WhatsApp groups were formed for each ward, adding the volunteer squad members, local politicians and village officials. Under the watch of the ward members, the team identified all financially struggling families. The contact details of the Sena members were shared with all residents of the locality so that they can contact them and order lunch for the next day.

Members of each ward tally the number of lunch packs they require and pass it to Arun before 9:00 am so that he can inform Sheela and her team to cook accordingly. This avoids the wastage of food.

"We make separate lists for free lunches and paid ones. Teams travel beyond the panchayat limits to distribute the food packs to some migrant labourers, security guards and beggars whose lunch plans have been drastically affected by the lockdown," said Jithu Shaji, a volunteer.

While the food is distributed for free for certain families, an amount of Rs 20 is charged from others.

The demand for food packs has seen a drastic increase within two days, Jithu said. While they distributed 80 packs on the inaugural day, it went up to around 130 on the second day and almost 150 on the third. Soon after they were selected, volunteer committees were constituted in the presence of a Health Department official who gave the team a briefing about how to deliver the pack at doorsteps by following the social distancing protocols. These rules are strictly followed while delivering the packages at homes where people are quarantined as per instruction.

Regular inspections are conducted at all kitchens by the departments of health, food and safety and the district administration. They make sure all safety and hygienic measures are followed and employees use masks inside the kitchen.

Also, direct trade is strictly prohibited in the wake of the lockdown and people won't be served food if they come to the canteen asking for it.

The volunteers disperse around 3:30 pm after cleaning the entire kitchen which includes washing all the utensils and disposing of the waste generated. A pit has been made for this at some distance from the kitchen, Arun said.

"The food is packed using banana leaves which are cut on the previous night to avoid the usage of plastic," he added.

Since the project is in its early days, Punnapra N is managing without utilising the Kudumbashree funds as many benevolent minds have come forward to sponsor rice and groceries. But this might change if the demand for the packs further increases. The neighbouring GPs of Ambalappuzha and Punnapra South, which distribute around 800 meals daily, are dependent on the fund as individual contributions can't feed as many people. 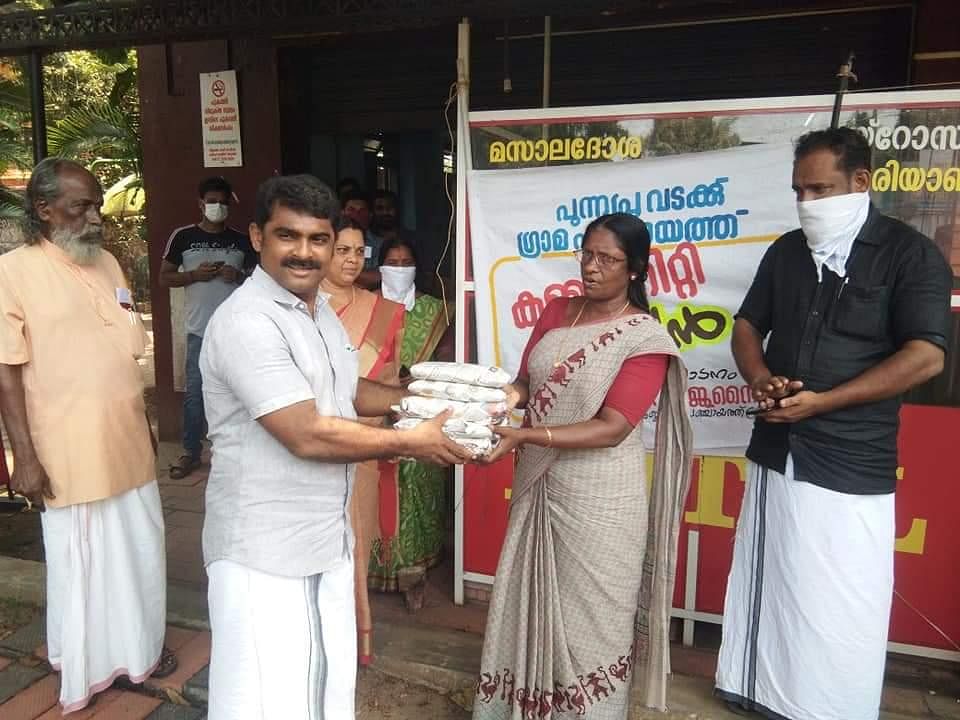 Another distinct announcement from Pinarayi Vijayan's presser was about the arrangements made to feed the animals of the state until the lockdown is lifted. The volunteers wrap up the day only after feeding stray canines of the area as the government insists. A fixed amount of rice is saved for them which is served with the leftover curries, the volunteers said.

As Sheela and her friends make their way back home, the boys stay back for another hour to dispose of the waste and wash the utensils. They call it a day soon afterwards and return to their homes to spend the rest of the evening as the curfew dictates -- in social isolation.