Kanagaraj, who has been working for a private cab as acting driver ever since he left the job at Kodanad Estate, suffered serious injuries in a road accident and died on the spot.

SALEM, PALAKKAD: He was on the run after he came under the police radar a few days ago, following the murder of Om Bahadur, a security guard at former Chief Minister J Jayalalithaa’s sprawling Kodanad estate. But Kanagaraj ran out of luck in life, when he met with an accident at Santhanagiri junction in Salem-Chennai NH late on Friday.

A special police team was in Vadapalani on Friday in search of Kanagaraj, the prime accused in the case, when they learnt that he had already left for Edappadi, his native village, in Salem.

It seems that after reaching Edappadi, Kanagaraj went to his aunt’s house in Sakthi Nagar on his motorcycle. He also met some friends in the locality and consumed liquor. Around 9 pm, he was on his way to Attur to buy liquor, when he rammed his motorcycle against a car heading towards Perambalur district from Bengaluru. 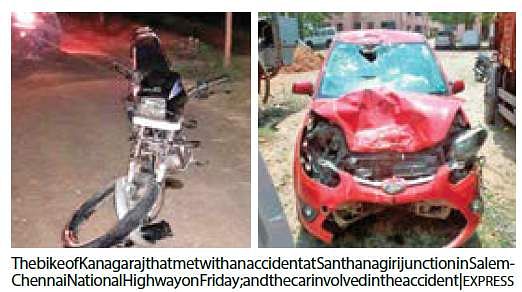 Kanagaraj, who has been working for a private cab as acting driver ever since he left the job at Kodanad Estate, suffered serious injuries in the accident and died on the spot. On information, Attur Police reached the spot and sent the body to Attur GH.

During investigations, the police identified the deceased as Kanagaraj and alerted higher officials. They also registered a case under Section 279 (rash driving) and 304 (to cause death by negligence) of the IPC and detained car driver Rafiq, a resident of Tammampatti in Salem, for investigations.

Speaking to reporters on Saturday, Kanagaraj’s elder brother Dhanapal said they suspected foul play. “We went to the accident spot, but did not find any evidence that could suggest that it was an accident. Further, the police are delaying the postmortem,” he said.

Later in the day, around 4.45 pm, the postmortem was performed. Around 6 pm, the body was handed over to the relatives.

Police sources told Express that this was clearly an accident. While we inquired with the car driver, he told that the deceased drove the bike in a rash manner and rammed the car. He alone was there on the bike and no one followed him. “There was no chase by police. It is just a rumour,” sources said. The deceased is survived by wife Kalaivani and one-year-old daughter.

In another incident, second accused in the case and Thrissur native Sayan K V was grievously injured when the car he was driving met with an accident at Kannadi in Palakkad in Kerala. Palakkad South Traffic Police said he was going to Thrissur with his family when the vehicle rear-ended a container fish lorry that was parked near a workshop due to a technical snag, around 5.30 am on Saturday.

Stay up to date on all the latest Tamil Nadu news with The New Indian Express App. Download now
(Get the news that matters from New Indian Express on WhatsApp. Click this link and hit 'Click to Subscribe'. Follow the instructions after that.)
TAGS
Kodanad estate Om Bahadur Security Guard Murder Santhanagiri junction Salem-Chennai NH Kanagaraj Death