Three teams of NDRF have been deployed in Alappuzha, Ernakulam and Kozhikode while assistance has been sought from the Army, Air Force, Coast Guard, NDRF and the Military Intelligence.

IDUKKI: If Kerala was at the receiving end of angry rains on Thursday, triggering landslides and flash floods snuffing out 26 lives and wreaking devastation in six of its districts, Idukki was the epicentre with as many as 11 deaths.

The toll on Friday has risen to 27 after a 47-year-old man drawing water was killed when the well caved in due to heavy rain at Palavila near Pirappancode in the morning.

Kerala's disaster was quietly in the making over the last couple of days as the relentless rain kept lashing the catchment areas,  but things got out of control with water levels rapidly rising overnight in two of its major dams — Idukki and Idamalayar.

The shutters of the Idamalayar dam were opened at 5 am with the released water flowing all the way down to Ernakulam district and swelling the Periyar river and the adjoining Aluva town. But it was the decision to open one of the shutters of the Idukki dam by 50 cm, though on a trial basis for four hours, by mid-day that really caused the public at large a sense of foreboding and dread.

As the water level rose to 2,398 ft, the shutter was opened on a test basis for four hours. But by 4.30 pm, the water level had gone way past 2,399 ft and the KSEB was forced to keep the trial run on through the night.

With the Idukki dam’s full capacity pegged at 2,403 ft, the writing on the wall is clear - the early hours of Friday will witness four more shutters being opened, each by more than a feet. A good eight hours after the trial opening of the shutter, the water level had surged past 2,400.

The trial run of the Idukki dam shutter opening will continue at the same rate through the night. 24 dams have been opened so far, which is unprecedented and is telling of the seriousness of the situation. People living in the downstream areas of these dams must be cautious. pic.twitter.com/6NSc0aFQst

Record rains pounded Idukki district with eleven people being killed and more than 200 forced to flee their homes.

In a landslide at Ettumury near Adimaly, five of a family were killed.

In two similar incidents, two couples were killed in landslips that occurred at Korangatty near Adimaly and at Periyar Valley, respectively.  In a landslip at Kurishukuthy near Kambilikkandam, a woman was killed.

Besides, a woman’s mutilated body was unearthed from the debris.

The US on Thursday issued an advisory, asking its citizens not to visit Kerala because of the flash floods in the state.

In the advisory, the US said the heavy southwest monsoon rains triggered landslides and floods in the state, and American citizens should avoid visiting all affected areas in the state.

The state government has sought assistance from the Army, Air Force, Coast Guard, NDRF and the Military Intelligence. Three teams of NDRF have been deployed in Alappuzha, Ernakulam and Kozhikode while two more teams are on the way. The state has sought six more NDRF teams to be deployed, said the Chief Minister.

Necessary rescue equipment for the Army would be brought from Bengaluru to Kozhikode and Kochi by air and would be transported to affected regions by road.

In view of the emergency scenario, a 24-hour monitoring cell under Revenue Additional Chief Secretary PH Kurian has been set up at the Secretariat. In addition, monitoring cells are operational at all Collectorates.

With the increasing water level at Kuttanad, the Nehru Trophy Boat race scheduled for August 11 has been postponed. The revised date would be announced later.

The Chief Minister urged the public to restrain caution.

"Rescue operation should not have any hindrance. Public going near dams to view opening of shutters, is not advisable. Only those assigned for rescue operations should be allowed. Tourists are advised to exercise caution," Pinarayi said while adding that those taking part in the Vavubali ritual should also be careful.

The government has issued directives to the police and fire force personnel to coordinate rescue operations. Officials have been directed to involve MLAs and other people's representatives in relief measures. 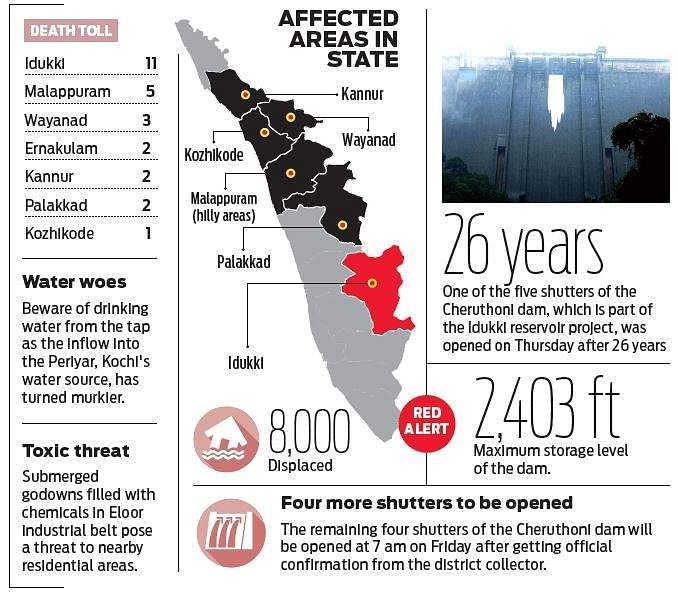 Scores of passengers were left stranded as the Cochin International Airport Limited (CIAL) was forced to partially shut down operations due to flooding on Thursday. Heavy rains and the rise in water levels in Periyar river due to Idamalayar dam opening its shutters led to spillage of water at CIAL premises.

Even though, according to an official press release, CIAL claims that only inbound flights were disrupted for two hours in the afternoon, passenger tales paint a different reality. Many international flights were reported to be delayed or cancelled by passengers who were denied entry at the gates of the international terminal.

"I had 5.30pm Indigo flight to Dubai, but was refused entry and was informed that flight has been cancelled for the day," said Irfan, a resident of Kochi. Somnath Panicker, who came to drop his daughter who was to travel by a 5 pm flight to Muscat reported the flight getting delayed by more than three hours. According to passengers, as many as three international flights were reported to be cancelled on Thursday. Inbound flights to Kochi were diverted to Coimbatore, Bangalore and Trivandrum airports during the partial shutdown.

Excess water entering the Chengalthodu canal from Periyar river adjacent to CIAL premises led to water being accumulated at the parking bay and spillover of the drainage canal. The airport officials were seen rapidly pumping water out water over its wall to reduce to the level of water accumulated inside. With the Cheruthoni dam set to open its shutters after a span of 22 years on Friday, operations at CIAL is set to be possibly disrupted again.

Hours after being cut off from the rest of the state following landslides along three arterial ghat roads, rescue efforts have begun in full swing in the hilly district of Wayanad.

READ | People in hilly regions of Ernakulam on tenterhooks

In addition to a team of the National Disaster Response Force (NDRF) from Chennai, Army personnel and men from Defence Security Corps from Kannur have landed in the district for relief and rescue operations. Over the last two days, the district received 39.8 cm of rain, causing widespread destruction.

The district administration has issued an alert to the public in the wake of water level rising in rivers and streams. The public has been advised to stay away from water bodies as the shutters of the Banasurasagar dam has been opened.

The public in landslide-prone areas have been asked to remain on alert and to move to safer places if authorities direct so.

Meanwhile, the Met Department has forecast rainfall to the tune of seven to 11 cm in the district on Thursday.