According to the Union Ministry of Health and Family Welfare’s latest data, nearly 44 per cent of the children in Bihar are underweight while the country’s average is 35 per cent.

NEW DELHI:  The high number of deaths caused by suspected Acute Encephalitis Syndrome (AES) in Muzaffarpur, blamed largely on malnutrition, is no surprise as Bihar and neighbouring Jharkhand top the list of States with the maximum number of malnourished children. According to the Union Ministry of Health and Family Welfare’s latest data, nearly 44% of the children in Bihar are underweight while the country’s average is 35%. It’s worse in Jharkhand, where 48% of the children are underweight.

As for stunted children, Bihar tops the list with 48% while the country’s average is 38%. As per the World Health Organisation, stunting is the impaired growth and development that children experience because of poor nutrition, repeated infection and inadequate psychosocial stimulation. The data also showed that nearly 21% of the children in Bihar are categorized as ‘wasted.’ As per the Unicef, wasting, or low weight for height, is a strong predictor of mortality among children under the age of five. 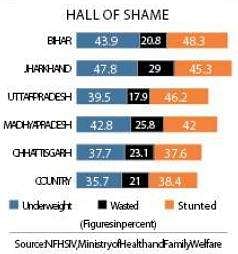 It is usually the result of acute significant food shortage and/or disease. There are 24 developing countries with wasting rates of 10% or more, indicating a serious problem that requires an urgent response.

While the government has undertaken different programmes to tackle malnutrition, the data shows that there isn’t any significant improvement.

The National Family Health Surveys of 2005-06 and 2015-16 clearly show the slow progress on this count. (See graphic)In a recent Parliament reply, the Ministry of Women and Child Development said the Government has accorded high priority to malnutrition and was implementing several schemes through state governments to address various aspects related to nutrition.

“This Ministry is implementing schemes like Anganwadi Services, Scheme for Adolescent Girls and Pradhan Mantri Matru Vandana Yojana under the Umbrella Integrated Child Development Services Scheme as direct targeted interventions to address the problem of malnutrition in the country. Care and support for mothers, clean drinking water and food security are some of the components to treat malnutrition,” it said.

The Government also started the POSHAN Abhiyaan in December 2017 for a three-year period from 2017-18 with an overall budget of Rs 9,046 Crore. The goals of POSHAN Abhiyaan are to achieve improvement in nutritional status of children from 0-6 years, adolescent girls, pregnant women and lactating mothers in a time-bound manner. Similarly, under the National Health Mission (NHM), the Ministry of Health and Family Welfare is strengthening health systems, which include various programmes to reduce under-nutrition among vulnerable people.